Hong Kong has an uncanny capacity to weather a crisis. And so has its property market, where prices are among the highest in the world. In the last 30 years, the city has recovered from the uncertainty surrounding the 1997 handover from Britain to China, the 1998 Asian financial crisis, the 2002-2003 Sars epidemic, and the 2008 global financial crisis.

But now it faces two quite different challenges at once — the Covid-19 pandemic and the imposition of tough national security laws by Beijing that raise questions about the territory’s cherished freedoms.

While the US and its allies have said Hong Kong’s autonomy has been undermined, China insists that it is simply implementing the principles of “one country, two systems”, set out in the 1997 handover agreement. Meanwhile, quarantine checks at Hong Kong’s borders are limiting its cherished double role as both an entry point to mainland China and an international hub, not least for rich investors.

Real estate professionals fear the property market could suffer a double hit, particularly at the luxury end, with some predicting a slide of 10 per cent for top properties. “We are expecting a correction for the mass market; perhaps a double digit [fall in prices] in the luxury market,” says Rosanna Tang, head of research for Hong Kong and Southern China at Colliers International, the property services company.

The top end of the property sales market relies heavily on buyers from China, while demand for the most expensive rental properties is sustained by international expats and their deep-pocketed employers. Both have had their access to Hong Kong restricted this year by Covid-linked border controls.

Asian prime property
Coronavirus: why property markets in Asia are struggling to recover 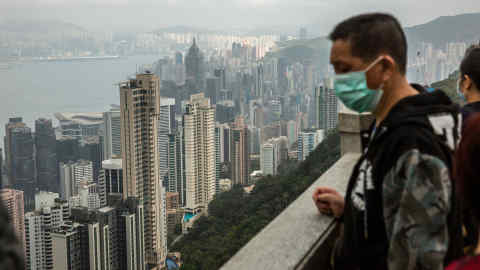 The judgments that these people — and their employers — are making about the attractiveness and safety of Hong Kong will strongly influence the upper reaches of the city’s property market. Already some foreign companies have signalled plans to move some or all of their Hong Kong operations elsewhere in Asia.

Across the market, 27,277 sales were recorded in the first six months of this year, according to Hong Kong’s land registry, 21 per cent fewer than the 34,520 properties sold over the same period in 2019. The slowdown is more marked at the top of the market, where investment buyers have dwindled, according to local agents. Some 4,742 sales above HK$10m ($1.29m) were registered in the first six months of this year, 39 per cent down on the 7,801 in the same period of 2019. There were 25 sales of properties priced above HK$100m ($12.9m) between January and the end of April compared with 22 in December 2019 alone, according to data from estate agent Knight Frank. Last year, 148 homes sold for HK$100m or more.

Uncertainty has driven many overseas buyers out of the market. Just 311 residential properties, or 1 per cent of the total, were sold in the first half of this year to non-residents, including mainland Chinese, compared with 3.6 per cent in 2019, according to Patrick Wong, a property analyst at Bloomberg Intelligence, the market research arm of the US information group. That has hit the luxury market hardest, he says.

An immediate challenge is simply viewing properties given pandemic controls. “Most people want to have a look at the apartments [they are buying], and with Covid-19 there have been a lot of travel restrictions,” says Wong. But beyond that there is the political uncertainty which may be feeding commercial doubts. As Wong says: “Since the security law, people have no idea what’s going to happen. People feel much more unsure about the future of Hong Kong.”

But the decline in prices has so far been far smaller than the slump in transactions. From a peak in May 2019, they have fallen about 6 per cent, according to data from Midland Realty, a local estate agent. Hong Kong homes remain the world’s most expensive, according to an annual survey by CBRE, the property company. Since the Sars epidemic, the city has seen an almost uninterrupted surge in values, with average prices quadrupling to a staggering $1.25m for a flat, according to CBRE.

For now, many prospective buyers are “biding their time, but feeling their moment may have come. They’re reflecting on the Sars period, where steep discounts were available and a lot of money was made,” says Simon Smith, head of research in the Asia-Pacific region for estate agent Savills.

Hong Kong’s recovery from Sars is widely seen as evidence of the territory’s resilience, including in property. After plunging by as much as 70 per cent in some areas during the epidemic, in a downswing that capped a sluggish six years, property prices bounced back.

Today’s discount-hunters might be hoping to emulate buyers who called the bottom in 2003 and buyers may pounce on even modest signs of the market now dipping. “If the seller is willing to offer a few percentage points of discount [the property] will be snapped up,” says Tang, at Colliers. 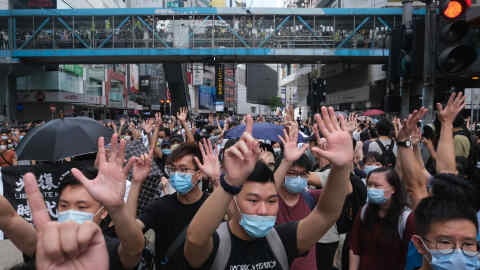 “But owners have also learnt the lesson from Sars and are reluctant to discount,” says Smith, at Savills. Cushioned by the long years of price appreciation, few homeowners are under much pressure to sell, and are preferring to sit out the uncertainty. “We’re seeing a dribble of deals, but sales are heavily down,” says Smith. “Mainland investment has completely dried up. [Chinese buyers] were at the high end buying luxury apartments, not mass market properties.”

The optimists are at least partly reassured by the city’s widely praised handling of the Covid virus. But even many of those who are comfortable with the public health services worry about the security law, which has prompted new protests in the territory as well as condemnation in the US and Europe.

Locals are increasingly looking to invest in properties abroad instead. “The security law means there are people who feel it’s not safe to put their money here. They might park their money somewhere else,” said Wong.

The UK has been a choice destination for many, particularly after the British government opened the door to citizenship to holders of British National (Overseas) passports in May.

Given that Hong Kong has not seen a month approaching normality since anti-government street protests broke out in June 2019, the resilience is striking. Few property owners are in financial distress, with the mortgage delinquency ratio at 0.04 per cent and fewer than 400 homeowners in negative equity, according to the latest figures from the Hong Kong Monetary Authority.

Tight supply of new housing helps to keep prices firm. Developers, a politically powerful group in Hong Kong, have slowed the building and launch of properties. “Developers have tried to be more cautious in putting new units into the market,” according to Martin Wong, an associate research director at Knight Frank.

The government, meanwhile, keeps a firm hand on the land market. While the social unrest that marked 2019 in Hong Kong prompted calls for more government housing projects with low-cost accommodation, those are yet to materialise. So supply remains short.

There is one lever to kickstart the market that the government has previously used but cannot pull this time: opening the door to the mainland. After Sars, Hong Kong successfully boosted the economy by signing the Closer Economic Partnership Agreement with Beijing, to boost tourism and trade.

The number of visitors from China swelled, as did the number of those buying homes. “Before the anti-government protests [in 2019], we could still see a steady flow of mainland Chinese looking to buy: for investment, to become owner-occupiers or for education for their children. From the mainland Chinese perspective, it’s always good to park some money in Hong Kong,” says Maggie Lee, head of residential estate agency in Hong Kong for Knight Frank.

This year, moving anything — money or otherwise — from China to Hong Kong, has been a struggle. The border has been only partially open for much of 2020, with mainland visitors having to enter quarantine on arrival. Even when it fully reopens, the flow of mainland Chinese will probably be reduced because of the anti-Beijing protests in Hong Kong.

“Since June or July [2019], mainland Chinese people are a bit uncomfortable about how Hong Kong people look at mainland China. They’re not buying, and some have left Hong Kong,” says Lee.

These fears are compounded by concerns over Chinese economic growth, the trade war between China and the US, and Chinese capital controls, which have tightened since 2016 to reduce money flowing out of the mainland into speculative property purchases abroad.

“Buyers who were active were coming from the PRC [People’s Republic of China]. They are staying on the sidelines for the moment,” says Tang. “A lot will also depend on when the Chinese economy recovers — when it returns to pre-Covid growth trends,” she adds.

So, with mainland buyers falling back and most of the 600,000 western expats preferring to rent, sales are being sustained by Hong Kongers. “Now it is locals: people holding the Hong Kong ID; people who have lived here more than 7 years,” says Lee.

Tang, at Colliers, says local families who bought in 2003 or 2004 and have reaped the benefits are now helping their children on to the property ladder. Even after a year of extreme turbulence those with money to spend still regard buying a flat as “better than putting money into the stock market”.