Ahead of her London exhibition, the African American painter looks back at a remarkable career

Neither the gracious Mayfair situation of the Victoria Miro gallery nor the nature of the art within breathes so much as a whisper of the despair — and self-belief — which form the bedrock of the show by Howardena Pindell, which opened this week.

At its core are large-scale abstract spray paintings from the early 1970s. At a distance, they sway and shimmer like radiant, liquid skins. Pools of raspberry glimmer through a lake of teal; violet patches mottle a scarlet prairie. Draw closer, however, and they resolve into tiny pointilliste dots. No brush could create anything so geometrically spherical.

In truth, the gadget essential to the paintings’ creation was a humble hole punch. With it, Pindell punctured manila folders that she had cut into strips, then glued together and covered with heavy watercolour paper. Using a plastic fringe “so the paint wouldn’t go over the edge”, she sprayed on her acrylic colours using an atomiser.

“I just enjoyed making them,” Pindell tells me, as we chat in the back office of the gallery. Her love for colour evident in her glorious outfit — matching aquamarine corduroy jacket and sweater, with necklace and earrings in similar marine tones. The African American painter, her bright eyes and switched-on manner belying her need for a walking frame, is clearly enjoying more than just her practice these days.

That sense of wellbeing has been a long time coming. Now 76, Pindell was born in Philadelphia in 1943. The daughter of two teachers, she grew up in a world where segregation was “implied” rather than enshrined in law.

At eight, she and her father travelled through northern Kentucky. “My father liked root beer so we stopped to buy some,” she recalls. “The mugs had red circles on them and when I asked my father ‘What is that?’ he explained that it was because they were meant for people of colour.” The experience marked Pindell profoundly and became, she thinks, the emotional origin of the circles that have always haunted her art.

Her parents were enormously supportive. When a third-grade teacher told them that their daughter was “very gifted” at art, they arranged for her to have classes at the weekend, took her to museums and arranged meetings with artists, both black and white, living in the area.

After a degree in painting at Boston university, she enrolled on the MFA at Yale where, aside from a fellow student Nancy Murata, who had Asian origins, she was the only person of colour in the institution.

On graduation, she moved to New York, where she discovered the city was far less ethnically integrated than Philadelphia. Arts institutions were shamefully sexist and racist. Although she was offered a job at the School of Visual Arts, it turned out to be a mistake. “Because my name is Howardena, they thought it was a typo and that I was a guy. When I turned up, the guy there said: ‘Oh, no. We’re not interested.’”

I was struggling to survive at MoMA. There were meetings I couldn’t get into because I was black

Against all odds, Pindell acquired a job in the department of prints and illustrated books at the Museum of Modern Art (MoMA) in 1967. The first black woman on the curatorial staff, she stayed at MoMA for the next 12 years.

Pindell came under attack from all sides. She was accused by other black artists of failing to assist their acquisition. But, she says, “I was struggling to survive myself. There were meetings I couldn’t get into because I was black.”

She was also a primarily abstract artist at a time when many artists of colour were working figuratively to address political themes. One museum director in Harlem told her “to go downtown and show with the white boys.”

Pindell had strong political convictions. As well as being a founder member of Artists In Residence, New York’s first women’s co-operative gallery, she was among those to protest when the Artists Space, a Manhattan non-profit, mounted a show entitled The N***er Drawings by Donald Newman in 1979.

The year marked a turning point. Pindell left MoMA after the Artists Space furore saw her further alienated from white colleagues who, she says, viewed any criticism of “white male artists . . . as censorship”.

Over the next decades, her work would weave strands of past and present injustice, from slavery to 20th-century warfare, from Sati (widow burning) to child abuse, by way of Africa, Japan and India (she is an inveterate traveller) into works that oscillated between painting, film, photography and collage. Although her abstract paintings are the crucible of her oeuvre, she is also known for “Free, White and 21” (1980), a 12-minute video in which she dons whiteface to play a feminist denying the reality of her black female interlocutor’s experiences of oppression.

At Victoria Miro, the last chapter of the exhibition is devoted to small paintings from 2007-10. They are assembled by tethering hundreds of tiny, painted scraps of paper on to their surfaces in jubilant eruptions of sea-blue, apple, sunflower and scarlet.

By the time she made them, Pindell had nothing to prove. Her work had been shown in major institutions, including at MoMA PS1 (1980), the New Museum (1990) and LA’s Museum of Contemporary Art (2007). Yet Pindell assures me that these exultant outbursts were made during “grim times” when she was “so broke” she was “rationing her food”.

Her saviour turned out to be the young Manhattan gallerist Garth Greenan. “He bought all the paintings!” she recalls, chuckling at the moment in 2012 when Greenan paid her a visit.

Since then, Pindell has ridden a triumphant wave with a calm grace. She was the subject of a retrospective at the Museum of Contemporary Art in Chicago last year. Next week, Victoria Miro will show her work “Songlines: Event Horizon” (2019) at Art Basel. And she is also a key part of Soul of a Nation: Art in the Age of Black Power 1963-1983, the major touring show that has already graced Tate Modern, Crystal Bridges Museum and the Brooklyn Museum.

Does she have any qualms about such identity-based gatherings? “No,” she replies. “I want as many people as possible to know that I am black and that, no matter what, you don’t give up!” 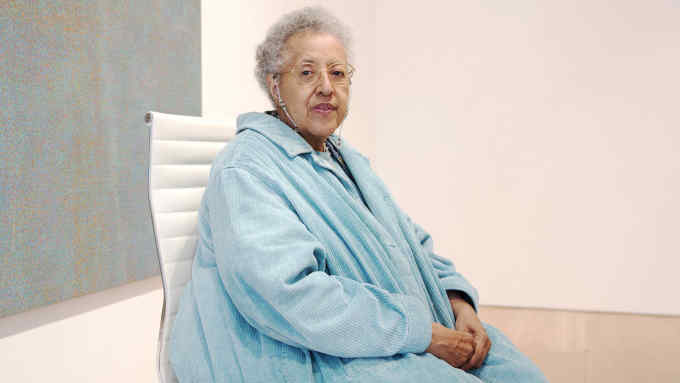