Could the appointment of two almost unheard of designers make the brand bankable?

Is Puig becoming one of luxury’s big disrupters? They’ve been doing some interesting business of late. The Spanish beauty group bought a majority stake in fashion label Dries Van Noten last year and, thanks to designer Julien Dossena, Puig has pushed Paco Rabanne from a place of moribund irrelevance to respectable fashionability in recent years. While it banks its fortunes on fragrances, this attention to more fashionable concerns is perhaps worthy of note.

Last August, Puig made an even more unlikely announcement: the appointment of Rushemy Botter and Lisi Herrebrugh, the duo behind the menswear brand Botter, as the new creative directors of Nina Ricci. The French house has been part of Puig since 1998.

Barely anyone has heard of Botter. The brand got some attention last year when the pair were shortlisted for the LVMH Prize and they received the Grand Prize at the Festival d’Hyères where their designs were bold, colourful and adorned with inflatable balloons. They seemed the least likely successors at a house known for its bourgeois elegance and the flighty fragrance, L’Air de Temps. But then stranger things have happened — look at the success of Balenciaga. Fashion legends have been created via the Unknown Designer Law.

Nina Ricci is a challenge. The closest it got to being commercial was under Peter Copping, who stayed faithful to its delicate aesthetic and delivered lots of lacy, very pretty little knits. Under Guillaume Henry it became more bourgeois and abandoned its client base. For better or worse, Botter and Herrebrugh have inherited a blank slate.

This first outing did not have the makings of a legend but was instead a pleasant enough collection of some clothes. To find their modern elegance, and by rooting through the archive, the designers had focused on fluidity and movement instead of the house’s famous florals, and rather than pretty dresses they showed pinstripe suiting, scuba and lots of organza shirts. Some of them looked a bit like beach mats with a ruffle trim.

Not surprisingly for a team with roots in menswear, there were mannish elements here. The tailoring was tidy and there were many of the more athletic signatures that now define that market; a swimsuit functioned as an alternative corset, and there were polo-necks, too. In a season in which few brands have done athleisure — even Off-White was surprisingly demure — this was a rare moment that sportswear got a look in.

Will it succeed? Nina Ricci is a difficult brand to make seem relevant. This made for an interesting starter, but it needed more meat on the plate. 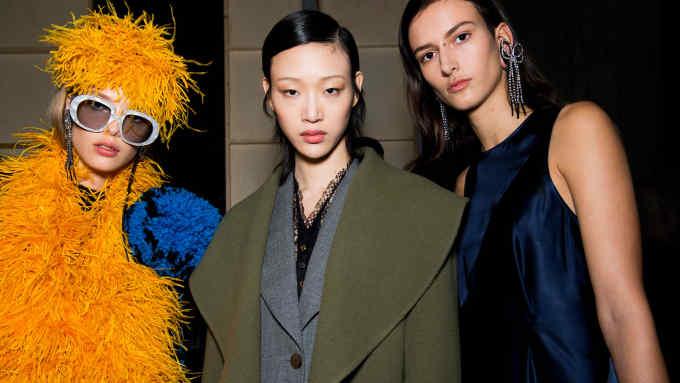