In late March, as the UK went into lockdown, grocery shopping suddenly became difficult. Home delivery slots were almost impossible to secure as would-be customers raced to order online. Shoppers faced long queues, with shops restricting the number of people who could be in a store at any one time.

Shoppers in Milton Keynes, about 50 miles north west of London, however, had another option. A small army of 80 or so delivery robots, operated by Estonian company Starship, kept steadfastly trundling through the streets, taking groceries to homes without human contact needed.

Robot deliveries of groceries have thrived during the pandemic. The robots involved look like white coolboxes on wheels and can travel autonomously — at a rather sedate 4 miles per hour — to any location pinpointed on a mobile phone app.

They can climb up kerbs (but not stairs) and come equipped with speakers so they can “talk” to people if necessary. Customers unlock the storage compartment with their mobile phones when the robot arrives and retrieve their order.

“It has been a real lifeline for customers who haven’t been able to get outside their homes,” Mr Perry says. “We’ve seen a huge increase in demand for robot deliveries since the pandemic began. We’ve doubled the order numbers and seen a fourfold increase in sales.”

Co-op had been using the Starship robots before the pandemic. It was the first UK retailer to adopt them when Starship began trialling the robots in Milton Keynes two years ago. The outbreak of Covid-19 has dramatically accelerated adoption.

The robots’ path has not been completely smooth. Customer complaints about bugs and usage difficulties are prominent among Starship app reviews. Some object to the small mark-up in price on the goods that Co-op and other retailers put on the goods delivered by robot.

But demand has been so strong that Co-op is increasing the service from two stores to eight. “We plan to increase to 100 robots,” adds Mr Perry.

Co-op, which had been slower than many of its UK grocery store rivals to move to online ordering and home delivery, has suddenly found itself with one of Britain’s most futuristic shopping options, thanks to the partnership with Starship.

In the US — where Starship had already been operating on a number of college campuses — the company has been establishing operations in several cities such as Mountain View in San Francisco, and Frisco in Dallas.

With its automated delivery service, Starship is not the only Estonian AI company to have been increasing business during the pandemic. Since throwing off the shackles of rule by the Soviet Union in 1991, Estonia has built a reputation for companies that specialise in advanced technology.

“These days we see that robotic products are favourites because they offer a completely touch-free experience,” says Mihkel Ilp, chief operating officer at Cleveron. “You just scan your code, the door opens, you grab your groceries and everything is done in 10 seconds.”

As the Covid-19 pandemic hit, the leading supermarket chains in Estonia installed Cleveron units within a couple of weeks. Several international clients expanded trials that they had with the company.

“It was the kind of quick decision making that we haven’t seen previously,” says Mr Ilp, adding that it “generally takes at least three to six months to get to this point”. Cleveron operates about 4,000 parcel hardware terminals for some of the world’s biggest retailers, including Walmart, and delivers about 1.3m packages a month.

Cleveron’s robots do not trundle the streets like Starship’s but they are robots just the same. Behind what looks like a sheet metal box is a lot of software that sorts and delivers goods efficiently.

Cleveron is testing a fleet of mobile delivery robots and has plans for a network of lockers integrated into bus stops across Estonia. Its aim is that every village and small town in the country would have access to such automated delivery.

The key to automated logistics is not the eye-catching robots, but the network and the clever choreography behind the scenes. Only then can home delivery be done with efficiency and at scale, says Duncan Tatton-Brown, chief financial officer at Ocado. The UK online supermarket company has spent 20 years developing automated grocery warehouses, staffed by swarms of robots.

“I could open an online grocery in my living room by installing a few freezers and delivering by hand,” says Mr Tatton-Brown. “I could even add a robot that would look good moving around.” But the trick is to do it profitably, he adds. “Unless I build the ecosystem around it, I will never get the economies of scale.”

At Ocado’s warehouses, the robots are only the tip of the operation. The crucial technology is the machine learning software that helps optimise everything from the supply chain to predictive maintenance on the robots. It is this that allows an order of 50 items to be put together in just six minutes.

Supermarket chain Tesco said in April it had surpassed one million online delivery slots a week for the first time, a rise in online capacity of 103 per cent in the space of a few weeks. It anticipated a continuing surge as the pandemic took further hold.

With its retail sales up by 40 per cent in the second quarter, Ocado’s business model — long criticised for continued losses — is starting to look vindicated. Investors treat it as a technology company rather than a grocery business.

Ocado earns a commission based on the volumes put through these stores. And supermarkets may only be the beginning — the same technology that moves bags of shopping could be used in shifting around many other things, from medicines to airline baggage.

Shopping habits are undoubtedly changing. If, as seems likely, they continue to do so beyond the pandemic, expect a ballet corps of warehouse robots, smart lockers and friendly, six-wheeled automated delivery vehicles trundling along the street to be part of the future.

Robots be damned, the weekly shop is still with us / From Simon Hathaway, Managing director Emea, Outform, Leicester, UK 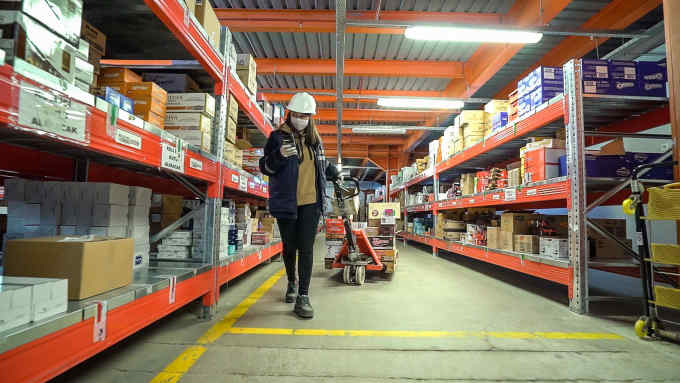