Accept & continue
Manage cookies
How To Spend It Design

The history of artisanship in Mexico runs deep. Long before Europeans set foot in Central America, pre-Hispanic cultures were weaving, carving and moulding materials into everyday objects. It was once a country of many nations – from the Mayans in the Yucatán to the Aztecs in the Central Plateau – each with distinctive cultures, as well as their own advanced style of architecture and artisanship. Yet, despite these deep-rooted traditions and techniques, Mexico has long looked to the north for design inspiration.

“We aspired to use materials and technologies that came from outside and, as designers, were confused where the source of inspiration should come from,” says Héctor Esrawe, co-founder of Mexico City-based Ewe design studio, reflecting on the country’s nascent design scene compared to the renown it has gained in contemporary art, with the likes of Pedro Reyes, and its great architecture defined by Luis Barragán.

In recent years, however, Mexican designers have begun to look inward, acknowledging the wealth of talent and resources on their doorstep. Other creatives are joining them from overseas, flocking south in search of the culture, skills and materials many of their own countries have forgotten. They are not here to learn but to collaborate, reimagine and help keep traditions alive.

One such creative is French-born product and furniture designer Fabien Cappello, who, following a three-week holiday, uprooted his life in London (where he’d lived for eight years having studied at the RCA) to relocate to Mexico City, before moving west to Guadalajara. “I was just so struck by the culture,” he says of the life-changing experience. His work incorporates local resources and manufacturing. “There isn’t a city in the world with more metal workshops than Guadalajara,” he adds. “Repairing or making something specific to your needs in a very local way is a concept that is still relevant here.” His pieces incorporate traditional materials: from seats tightly woven in natural tule reed fibre to vintage chairs with geometric fabric. “Everything I wanted to develop in my design work is so present in Mexican materials. To understand more, I needed to participate.”

“We stopped caring about a stereotyped expression of our culture”

This new focus on Mexican design heritage reflects a growing interest in its culture. Evidence of this can be seen in the success of chefs such as Enrique Olvera, who has opened a string of restaurants (including Cosme in New York City), casting a spotlight on what is arguably one of the world’s most historic, complex and creative cuisines. “There is more support for Mexico globally,” says Age Salajõe, another Ewe co-founder. This coincides with the general shift towards the artisanal, which has given Mexican designers a platform, while instilling a sense of pride and confidence in their cultural values. “We stopped caring about working on a stereotyped expression of our culture, and stopped developing design based on the expectation of what Mexico is for others,” Esrawe adds. “The main question now is what is Mexico to us?”

For many designers, the answer to the country’s design future lies in the past – and the skills passed down through generations, often in small rural communities. Many such skills risk being lost forever without timely intervention. Ceramicist Perla Valtierra turned her attention from industrial design to ceramics after participating in a craft and design program with a community in Zacatecas.

“I became aware of the possibilities we have in Mexico and realised how many people are out there making things across the country,” she says. After studying and living abroad in Brussels and Paris, Valtierra returned to Mexico City last year, where she now produces ceramics with master craftsman Don Jesús Torres (whose skills were passed down to him from his father). Their pieces, hand-turned on the wheel, include tea cups and side plates with frilled rims and vases with rivet detailing. “The process is completely collaborative. We’re learning from each other,” says Valtierra, who sees a value not only in preserving these techniques but in creating a sustainable supply chain.

Establishing a sustainable infrastructure where artisans are empowered to work independently in their own social and cultural environments – while enabling them to thrive – is the impetus behind txt.ure, founded by Regina Pozo. The project aims to revive techniques and reinterpret objects, as well as create visibility and channels for distribution. Its signature piece is a tabouret stool woven from tule using an ancient weaving pattern. What makes it so special is that it embodies the idea of reinterpreting something old into the modern – in this instance that an item harking back to the Aztecs is just as relevant and desirable today.

Ewe Studio also fuses artisan heritage with new mediums, and collaborating with master craftsmen allows its designers to work with people they’ve long admired. “Sometimes they challenge us, sometimes we challenge them – it creates a mutual learning process,” says Esrawe. The result of this approach includes a Tikal green marble table hand-carved by stonemasons and a sculpture-like altar marble table inspired by religious rituals and ceremonies, bringing pre-Hispanic skills, materials and ideas into the 21st century.

Collaboration is also key for Dominican-born designer Javier Reyes, founder of Rrres, which he has established in Oaxaca, Mexico. “Having something handmade is luxury,” he says of the renewed interest in heritage design and craftsmanship. He has sought out under-the-radar artisans, often without access to the resources needed to showcase their skills. His bright, geometric, hand-dyed rugs are made by Zapotec weavers while tall playful palm sculptures are crafted using a traditional weaving technique from Guerrero. It’s a collective effort.

These distinctive designs embody the region in Mexico in which they were made. Even if you haven’t visited the country, they transport you there. “One of the things about craft-design is that you can tell a story of place,” agrees designer Daniel Valero of Mestiz. Born in Saltillo in the north of the country, Valero began collaborating with artisans to experiment with the traditional sarape weaving technique to create new textiles in 2014. He went full-time with his brand in 2018 and now works with makers across the country from Guanajuato to Bajio, creating ringed pottery in ultramarine, light pink chairs woven from palms by nomadic craftsmen and colour-blocked freeform wool rugs – pieces with a deep connection to the regions in which they originated. “I’m trying to continue the evolution of craft where it began,” Valero explains. “Someone has to do it, because everything that doesn’t evolve dies.”

As this new wave of creators shine a light on Mexico’s heritage, reviving techniques on the brink of extinction, the rest of the world has begun to take note – and the colourful, organic forms of Mexican design are set to be a big trend for 2021 and beyond. “Mexico has become a reference,” Esrawe concludes. “And as designers we’ve begun to look at who we are as a culture with pride.” 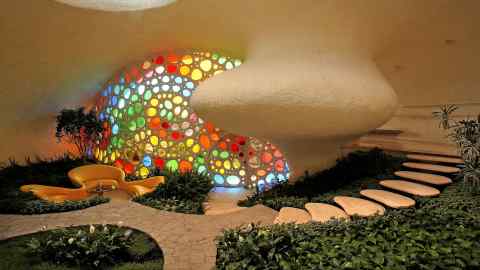