The UK is in talks with some of the world’s biggest sovereign wealth and pension funds about investing in British green energy projects, including gigafactories and offshore wind farms.

UK minister Gerry Grimstone told the Financial Times that he has had discussions with investors including Temasek and GIC, the Singaporean sovereign wealth funds, as well as Australian and Canadian public pension schemes.

But Grimstone, former chair of Standard Life Aberdeen, also acknowledged there were questions about whether one of the UK’s largest planned inward investments — a nuclear power station proposed by Chinese state group CGN — would proceed.

Ahead of the UK hosting the UN COP26 climate conference in Glasgow in November, Grimstone said the government wanted to secure investments in British low-emissions projects, ranging from factories to make batteries for electric cars to offshore wind farms and carbon capture and storage.

Investors will be invited to a government summit at Windsor Castle in October.

Future overseas investments in the UK are likely to be structured similar to a bioscience initiative announced last month, which involves £800m from the United Arab Emirates’ Mubadala wealth fund alongside £200m from the British government.

Grimstone said investments were expected in areas such as technology and infrastructure.

Asked which overseas funds he was speaking to about investing in the UK, Lord Grimstone replied: “All of them. It’s a very open tent, different sovereign wealth funds have different priorities, different things they look at.”

The removal of uncertainty around Brexit has meant a sharp increase in inquiries from global investors in the past six weeks, according to Grimstone. “Once it’s done, it takes away uncertainty,” he said.

He added the UK should welcome inward investments because overseas funds tended to be “more innovative”, create more jobs and spend more on research and development than their domestic equivalents.

However, Grimstone said it was important to do “due diligence” on potential investment partners.

China’s CGN has been blacklisted by the US amid increasing tension between Beijing and western governments and Grimstone said the company’s planned nuclear power station at Bradwell in Essex would depend on several factors.

“As ever with these things, the question will be as to whether it’s to our mutual advantage and whether there’s sufficient safeguards,” he added. “If you read the energy white paper before Christmas it’s by no means certain that this country is going to be building large nuclear power stations.

“You have modular nuclear power stations coming forward, you have other sources of power, you have to jump a number of hurdles before you get to that decision.”

Grimstone started running the new UK Office for Investment early last year, just before the Covid-19 pandemic struck, having worked at Standard Life and Barclays as well as been a civil servant helping on the privatisation programme under Margaret Thatcher.

The Greensill Capital scandal has raised far reaching questions about government lobbying by business and people holding roles in both the public and private sectors. Ministers and civil servants have come under intense scrutiny.

Grimstone described his ministerial role as a “concierge” for global investors in the UK — arranging meetings in Whitehall with British companies, while creating deals in which overseas funds can invest in domestic industries — and said he had quit eight private sector roles before starting the government job. 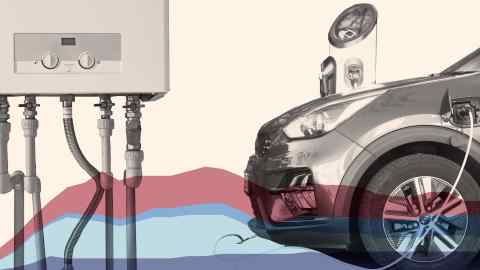 “One of the lessons from Covid has been a demonstration of when the private and public sector do work together they can achieve an enormous amount,” he added.