EU countries have toughened rules on the contentious Nord Stream 2 gas pipeline from Russia to Germany but have pulled back from changes that could have undermined the project.

Bloc ambassadors on Friday agreed to extend EU oversight of the Russian-funded $9.5bn Baltic subsea project, including rules on transparency and shared usage, after Germany and France hammered out a compromise.

Nord Stream 2, which is being built by Russian state-owned Gazprom and is backed by five European energy companies, has stoked political controversy on both sides of the Atlantic because of fears that Moscow could use the pipeline to reduce gas shipments through Ukraine and deny Kiev an important source of revenue.

The US has long threatened sanctions against the pipeline, which critics argue is a political rather than commercial enterprise that would double the amount of gas that Russia could send under the Baltic Sea to Germany. Donald Tusk, European Council president, has branded the project a “mistake” that runs counter to EU rules, security and strategic interests.

The new regulations require the pipeline to meet the four EU energy rules, including non-discriminatory tariffs and transparent reporting of gas shipments. The rules also require at least 10 per cent of the capacity to be offered to third parties, and so-called ownership unbundling, where the pipes are not owned directly by the gas supplier.

However, under the new Franco-German proposal agreed on Friday, the member state where an import pipeline lands — in this case Germany — will decide how to apply those rules. The proposal “received widespread support”, according to an EU diplomat.

Berlin worked to water down an initial French-backed proposal that would have had a deeper impact on the project.

The deal represents a breakthrough in Brussels’ attempts to stall the venture and analysts said the compromise could help convince Washington that US sanctions are not necessary.

If Berlin were to apply EU energy rules fully to Nord Stream 2, it would change the project’s operation and economics but would not halt it.

Nord Stream 2 brings short term benefits to German consumers at the expense of security of supply in eastern Europe. It might force Ukraine to buy gas directly from Russia again, with all the repercussions this might imply

“The compromise that passed in the Council leaves the future regulation of the pipeline in the hands of Berlin, which is good news for Gazprom,” said Sergey Kapitonov, gas analyst at Skolkovo Energy Center in Moscow, on Friday

Next week, council officials will start negotiations with the European Parliament to finalise the reform, with the goal to complete it before the European elections in May.

The pipeline is forecast to be complete by the end of the year, and will be co-financed by five European companies: Engie, OMV, Shell, Uniper and Wintershall.

“Nord Stream 2 brings short term commercial benefits to German energy consumers at the expense of security of supply in eastern Europe. In particular, it might force Ukraine to start buying gas directly from Russia again, with all the repercussions this might imply.” said Georg Zachmann, senior fellow at Brussels-based think-tank Bruegel. “It gives Russia strategic leverage, which gas transit routes to use or not, allowing it to target individual transit countries.”

Dmitry Peskov, spokesman for Russian president Vladimir Putin, said on Friday that Nord Stream 2 would not increase Europe’s reliance on Russian gas, and that the project supported “mutually advantageous interdependence” of both sides.

“Such projects do not increase anyone’s dependence; instead, they create interdependency, given that Europeans depend on Russian gas to the same degree that Russia depends on European demand as a supplier,” said Mr Peskov. 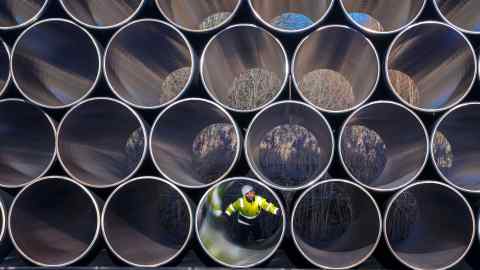 President Donald Trump and US legislators have opposed the new pipeline and threatened sanctions to try to stop the project. While Washington has raised security concerns, they also have commercial interests in selling US liquefied natural gas to the EU.

A person involved in the negotiations between Gazprom and Brussels over Nord Stream 2 told the FT that the EU hopes to use the directive to show Washington it is taking action against the pipeline, to convince the US that sanctions are not necessary.

“If we can get the directive applied then this would be much less intrusive than US sanctions,” said the person, who declined to be named as the talks were not public. “Getting both France and Germany on board could save it from sanctions.”

Gazprom and the Russian government have long stressed that the pipeline will be built regardless of EU support or the assistance of European partners, and have condemned the US threats as a move by Washington to hurt Russian business interests and support exports of American LNG into Europe.