In Paris, the trend for logos shows no sign of fading away

Many designers grasp around for a token or an emblem, a way to easily define who they are, and then to sell it. In the past, that came via silhouette or technique — a garment, maybe; even a material. Today, it’s more likely to be writ large rather than worked into the seams. Perhaps it’s symptomatic of the age in that those consumers aren’t demanding more — more depth, more meaning — but reacting to the surface of things. Logos and slogans are popular with designers and their clients alike; for the latter, they’re an easy way to indicate your affiliations or, perhaps, to show just how much you paid something.

The words that Virgil Abloh writes on his clothes at his brand Off-White — which you could call slogans, or logos — are both of those and neither. When Abloh writes “Pattern” on a Prince-of-Wales jacket, it’s because it’s patterned; he writes “For Walking” on the side of a pair of boots, because they are “for walking”. At the same time, those simple descriptors, in a nondescript but instantly-recognisable font, are immediately recognisable to those in the know, denoting who made the clothes and, to a degree, what the wearer stands for, like a fashion-specific shibboleth. They say way more than simple words.

Broadcasting was the theme Abloh was exploring, interestingly enough, in his Autumn/Winter 2019 show. It was obvious (ish) from the set, which had the ChromaKey green-screen hue of a shonky, lo-fi cable broadcast (complete with black crosses for keying cameras). Other than casting a greenish pall over the start of proceedings, that didn’t affect the audience in the Off-White venue much. The huddled masses watching the live stream (or, more likely, Abloh’s Instagram stories) were the ones who saw the ground animated with shots of different landscapes, sometimes swamping the clothes too, if they too were Kermit-green, leaving the model a perambulating, floating head. He called the show “Public Television’, and really that’s what fashion has become — entertainment, with the clothes themselves as merchandise. Abloh’s audience buy his Off-White with the vehement fandom of teenage groupies: that’s one of the reasons he was recruited to generate hits for Louis Vuitton, for whom he’ll show his sophomore menswear show tomorrow.

The hallmark of Jonathan Anderson’s aesthetic is craft — both at his own JW Anderson label, and the Madrid-based luxury house of Loewe, where he is creative director. The latter is showing menswear on Saturday on a catwalk for the first time; the former, for the first time, presented his in Paris. That’s an achievement in itself, before you even talk about the clothes. It puts Anderson on a level-pegging with the Brobdingnagian talents of Karl Lagerfeld in terms of the sheer number of fashion shows, per year, that he has to generate individual identities for.

So, obviously, there’s a crossover. That’s just clever. Anderson mixed menswear with womenswear, which he’s done before in London, and talked about the two as part of “a continuous language.” But that language pervades his work, unites it. Laying it out in broad strokes, it encompasses a love of, appreciation for and keen eye for art, an intelligence, a degree of oddness (this time, literally odd shoes were a leitmotif) and perhaps above all, a sense of the human hand. Anderson doesn’t have to write his name on his clothes — he owns them, creatively, and you could never mistake anything he creates for that by any other hand. Except, of course, for those who imitate him — which they do. Because Anderson’s clothes are creatively satisfying and commercially savvy. Match those shoes back up, and they’ll fly out of stores.

He described the collection’s clothes in wide terms — earthly, nomadic. “I thought, how do you reinterpret garments and how they should be worn?” They had a sense of the hand, but also of the mind. And Anderson’s intelligence is appreciated.

One down, one more to go.

Last season, Pierpaolo Piccioli presented a menswear collection that said nothing but Valentino — literally. Logomania ran rife, crosshatched into a check over tailored suits and tracksuits; the letters jumping around, ironically, on a glossy camouflage coat. A guy was wearing that in the audience today: if it was camo, it was of the dazzle variety. Piccioli is clever, soulful, feeling, so it was surprising. But he’s also a clever businessman: the house’s revenues grew 5% to €1.16bn in 2017, eliciting apparently empty (or at least unconfirmed) hubbub about an imminent public listing. And these are clothes men want. The un-camouflaged Valentino client was of a certain age; there were rappers wrapped with Valentino-insignia-ed bumbags in the audience, but you see men in their fifties buying coats in the boutiques. This Valentino show held plenty for them: a collaboration with Birkenstock (branded with “VLTN”, or in then house’s trademark lipstick-red); another with the cult Japanese streetwear brand Undercover.

In describing this collection, Piccioli intentionally misquoted a Tanita Tikaram lyric. Yes, really — endearingly naff. He’s a very normal guy who has a celebratory dinner after each show with his extended family. He said the collection was “a twist in the sobriety,” which came from that Undercover collar, where weird graphics — Beethoven’s face with a UFO splashed over it — jiggied up classic coats in camel or grey. And that’s often just what a luxury client wants: something sober, twisted enough to make it interesting enough to buy, again. And of course, they also like the fact they say ‘Valentino’ — whether woven quietly into the seams, or in honking great red letters right across the front.

Explore the series
READ MORE
Independents Day: Italian designers do it their way 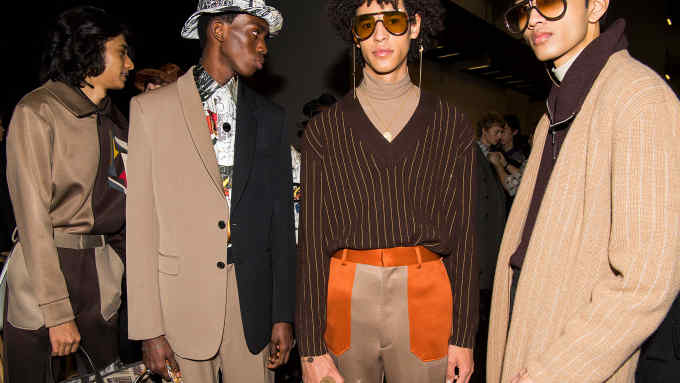