The bugle called in the clear Patagonian air and they were off. Twenty-three riders – guinea pigs handpicked for equestrian skills and resilient personalities – surged over the scrub. Chris Petersen, a silent Canadian backwoodsman, whooped as he led them out at a canter. Their first beacon: the San Lorenzo Andean peak glittering to the west. It was high noon and the inaugural Gaucho Derby, the world’s toughest horse race, was under way.

The Derby is the latest brainchild of Tom Morgan, owner and founder of The Adventurists, an idiosyncratic travel company whose raison d’être is to take clients to the edge via bizarre competitions in out-of-the-way places. His first was the Mongol Rally, whereby bangers with 1-litre (or less) engines made their way from London to Ulan Bator. The Mongol Derby followed in 2009 – 1,000km across the steppe, with a change of horses every 40km, just as was the form circa 1200, when Ghengis Khan established a postal relay system that stretched from the Sea of Japan to the Caspian. These and other projects – the Rickshaw Run in India, the Monkey Run on motorbikes in Peru, the Kraken Cup off Tanzania – require a minimum £1,000 contribution per competitor. To date, he’s generated £8m for charitable causes.

Morgan watched the Gaucho riders take off with customary detachment. He indulges his own lust for adventure by recce-ing every challenge he sets up, so he knew what they would face over the next 500km of tough Andean terrain. With limited riding experience, he had explored the route with two collaborators: Rama Gregorio Arcal, a local estancia owner; and Jakob Von Plessen, Argentina’s (and Instagram’s @jakotango) endurance-riding poster boy. Together they bushwhacked through marshes, ravines and forest for 14 days in 2018.

Arcal has a 5,000-hectare property and is ranching royalty (his ancestors arrived from Spain in 1930), so was ideally placed to persuade fellow estancia owners to allow access to their land and rent out their horses to strangers from another planet. “The gauchos think we’re crazy,” said Morgan. But in an area where work opportunities outside ranching are rare, the more astute ones were happy to accommodate the lunacy.

With the style and charisma of a 21st-century Che Guevara, Von Plessen, the owner of Jakotango riding safaris outside Bariloche, is the kind of guy no man wants to stand next to in a group photo. He advises a machete for trips into the mountains: on the recce, he used his for five hours to force a way through the forest near the end of the first leg. (A machete was not on the essential-kit list, though many would have found it useful.)

Since 2009, when the first Mongol Derby was inaugurated with a Buddhist blessing on the steppe five hours out of Ulan Bator, Morgan’s equestrian-endurance family has expanded; 11 of the riders on the Gaucho Derby had already competed in Mongolia. One of them was Charles Van Wyk, an architect from South Africa who was dumped on the Mongol start line by the whirling-dervish horse he’d drawn in the ballot. (It floored me too.) But he remounted and rode on to share victory with a Mongolian contender – seven days and 1,000km later.

After losing 20 kilos to meet the 85kg weight limit for the Gaucho, Van Wyk joined the ragtag cast at the aptly named La Perseverancia estancia, seven hours north of El Calafate. The training days leading up to the race saw stir-crazy riders testing new tack and learning about communications systems. Each was issued with a GPS and a Garmin inReach Mini – essential lifelines synced to HQ.

The Derby’s Zimbabwean head veterinarian, Jeremy Hubert, outlined procedures: “The horses haven’t signed up for this, so their welfare is the priority.” Using proven Mongol Derby protocol, six mounted vets would regularly check pulse rates for overexertion at designated stations; if a horse was overstressed, that rider would have to sit out time penalties before selecting their next steed.

In the evenings, everyone partied gaucho-style. Several lambs, frolicking on the property that morning, were stretched out on iron crosses above flaming logs. A gaucho trio played and the Patagonians danced while the big meat grilled. Some drank Malbec. And more Malbec. (When you are sleeping on camp beds in a shearing shed newly cleared of fresh skins and dried testicles, any bromide is a plus.)

So who were these riders prepared to spend upwards of £11,000 to take on the unknown? From 2,000 expressions of interest on The Adventurist’s website, 23 contenders were selected for FaceTime interviews and reference checks. “The race offers elements of chaos in an over-sanitised world, so we needed people who could look after themselves in a crisis,” Morgan explained as he finished his umpteenth call to rescue services, who were trying to renege on the emergency helicopter. “We’ll monitor them to prevent idiot mistakes, but they won’t see us.”

The chosen ones ranged in age from 22 (Zsofia Homor, a passionate horse lover who plans one day to ride from the Chinese border to her native Hungary with two horses and her dog) to 58 (ex-Marine Robert Skinner, owner of Exeter nightclub Timepiece). The American West, Canada, Australia and South Africa were also represented. The UK participants drew on its racing and hunting set: a sometime steeplechase jockey, Chris “Maudie” Maude, who now runs a valet service supplying clean kit to jockeys at race meetings; Clare King, married to trainer Neil King, who has a high-powered job in finance, two children and success as an amateur jockey; and Shirley Haywood, an experienced endurance guide, representing Yorkshire grit. In 2018, aged 42, she suffered a brain haemorrhage. “A year ago I couldn’t go to the supermarket. This is my way of saying, ‘I’m back.’”

The self-styled “Ledbury Ladies” – Louise Daly, master of the Ledbury Hunt, and her friend Laura Redvers – had brought their tent still in its Amazon packaging and trained together in blissful ignorance of what they’d face. “Camping? Well, a little glamping,” said Louise, remembering her first training session back home on the Brecon. They were soon put right by head paramedic Andy Fraser, who did vital triage after the 2015 earthquake in Nepal and trained the White Helmets in Jordan. He addressed the riders on safety (or, as he put it, to “scare the hell out of them”), warning that help might be a long time coming, and emphasising how quickly hypothermia can kill.

The race’s mountain stages, which required leading a pack horse loaded with bulky orange hay bags filled with necessities, were a unique Gaucho Derby feature. For some, two horses was one too many; within 50m of the start, an American called Nichole Murray was on the ground, trying to control a pair of overexcited animals while she adjusted unbalanced saddle bags. Half an hour later, as Morgan and the support team settled down to a lunch of local ostrich grilled over an open fire, Julie Youngblood, an American firefighter, rode in minus her pack horse. A gaucho rounded it up in short order, and Youngblood set off to find her riding companion. “She won’t go on without me,” she yelled, “because I’ve got the tent!”

And still the sun shone as we drove south, ahead of the riders, to the end of the first leg, where 28 Arabs grazed peaceably in the corral while Daniela Inostroza, our indefatigable cook, set up her pots outside semi-derelict buildings. Intel from HQ suggested some of the riders were making good progress – notably Von Plessen, hors concours on his own horses, and Melbournian Roberta MacLeod, who was following behind. Von Plessen arrived shortly after daybreak on day two, having freed a horse trapped by a branch with his machete. Roberta had been heading for the Chilean border.

After a short break, Von Plessen departed at speed on the second section. We waited for more riders to arrive... and waited. Would anyone get there by dark? Shortly after it became clear they wouldn’t, the storm hit. Savage westerly winds that brought 160kph gusts, horizontal rain and snow raged through the night, the wooden buildings creaking and shifting. The savvy riders from icy North American climates – Marie Griffis (Montana), Chris Petersen (Calgary) and Courtney Kizer from the Moab, in Utah – bunkered down to ride out the storm in their tents. Von Plessen returned to join a rescue mission with Arcal. Across the long day, snippets of information filtered through: a mild concussion, symptoms of hypothermia. Shirley Haywood disappeared over a hill when her companion was ordered back to the starting point after losing her pack horse. Other riders struggled to find the stone hut where the support team kept the fire alight.

Another bleak night and morning; and then suddenly there was Marie, trotting briskly across the meadow to the vet checkpoint to cheers of relief. Shortly afterwards, Clare and Courtney arrived, all smiles and keen to press on. Marie told of circling a stretch of marsh for five hours until she found a way forward. All she wanted now was a hot lunch and the pick of the Arabs for the next leg.

Instead, the race was halted while the emergency helicopter, finally delivered as promised, evacuated four suspected hypothermia victims from the stone hut to El Calafate. After a night in hospital, they were back to claim their Arabs and the Derby resumed. Without further misadventure, the field bunched up on the last dramatic leg towards Mount Fitz Roy, the king peak among the spectacular glaciers at El Chaltén. On the penultimate day, Rob and the Ledbury Ladies led their horses up a shale mountain, summiting just before the 8.30pm riding curfew. Far below, the glorious sight of a river flowing through grassland spread out before them. Emerging triumphantly from turbulent currents to cross the finish line the next morning, they were met by a national park ranger who informed them that their permit had expired.

A dampener on the afterparty? Hardly. Once outside assistance was factored in, Marie was the winner, with Clare second and Chris third. Back in El Calafate, Maudie the former jockey celebrated his birthday with a pub crawl. Would he be back next year? “Nah – been there, done that,” he said. A brief pause. “Where’s the next race?”

Minty Clinch travelled as a guest of The Adventurists (theadventurists.com). The next Gaucho Derby is 28 February – 13 March 2021 and costs £11,375, excluding international flights. 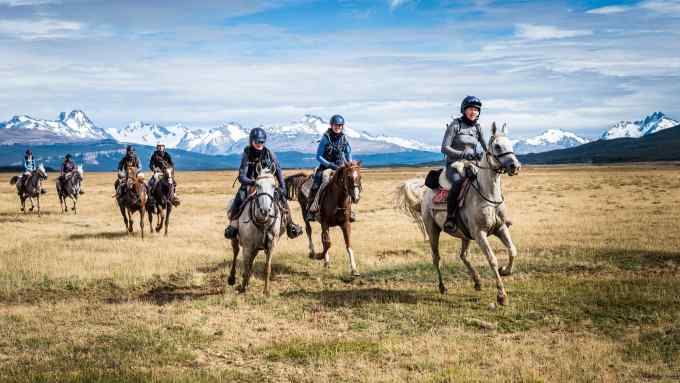