Government deploys guerrilla tactics as it prepares for showdown

Fear of a Conservative prime minister is not entirely new for the BBC. Such was the distrust of Margaret Thatcher, who saw the BBC as a liberal enemy that should be cut in size, the corporation’s top brass would sweep their offices for listening devices.

But Mr Johnson arguably poses a more unique and formidable challenge to a broadcaster that has long relied on its deep public support — the average British adult spends 18 hours a week with the BBC — to shield it from politicians seeking change.

With traditional broadcasters losing sway with audiences amid a booming supply of information and entertainment, including from deep-pocketed US streaming services, any move against the BBC would come at a time of increased uncertainty and vulnerability.

Should he decide to reshape Britain’s public service broadcasting system, Mr Johnson and his team have five ways they could pursue it.

Mr Johnson seems ready to deploy some guerrilla tactics against the BBC as he prepares the public for a potentially big change at one of the country’s most trusted and popular institutions.

Steady Donald Trump-like questioning of the media — building on some themes of the election campaign — appeals to Mr Johnson’s team as a way to shift the BBC’s centre of gravity and reset the “London lefty” instincts they have long bemoaned as out of touch.

During the election campaign, the BBC came under repeated attack from critics on the left and the right who said its coverage did not meet its strict guidelines on impartiality. It riled the Tories when Andrew Neil issued a challenge to Mr Johnson to be interviewed, an offer he declined. 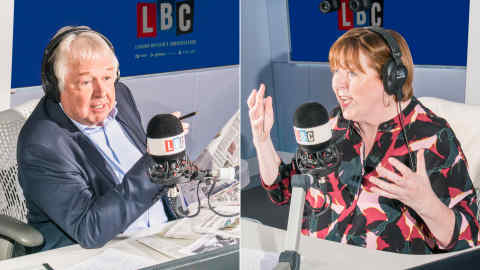 The presenter Huw Edwards, who anchored the BBC’s election night coverage, this week launched a robust defence of the corporation, dismissing accusations of bias and stressing its journalists’ commitment to fair play and due impartiality.

“It’s not ‘biased’ just because you happen not to like it,” Mr Edwards wrote on LinkedIn.

Jean Seaton, media historian at the University of Westminster, said: “Not going on the BBC is denying the British public the opportunity of having its ministers interrogated. Trump has done that, it’s the modern way.”

The BBC is governed by royal charter, which sets out its public service obligations and editorial independence, and an agreement with the government, which outlines its regulatory duties and funding.

The current agreement runs until the end of 2027, guaranteeing the BBC’s licence fee funding model for at least another eight years. But the exact level of the licence fee will be renegotiated for 2022, with negotiations set to begin within the next few months.

Mr Johnson’s government will have an opportunity to strip the BBC’s funding, or start a process to remake the corporation’s funding model after 2027.

Patrick Barwise, professor at the London Business School, said past governments that went after the BBC chose a more subtle approach than straight-out cuts, using funding settlements to heap more responsibilities on the broadcaster.

“The calculation the government has to make is how big the backlash and political cost will be, because the BBC is — like the NHS — very much loved by the public,” he said.

Free TV licences for the elderly

In its 2015 settlement with David Cameron’s government, the BBC was handed responsibility for free licences for the over-75s, a benefit expected to cost £745m by 2020-21.

To minimise the hit to its finances, the BBC this summer announced it would means test the subsidy, forcing two-thirds of pensioners — roughly 4m people — to pay the £154.50 a year licence fee.

The move prompted outrage from both politicians and the public with Mr Johnson promising to “put the screws” on the BBC to make it retract.

With enforcement letters due to be sent to pensioners early in the new year — a move that one BBC executive said would be hard to reverse — any pressure from Downing Street could materialise soon.

Any financial deal is expected to come at a high price. Veteran executives fear it could range from paring back its online news services — which the government’s newspaper allies have long called for — to privatising parts of the service.

Conservative ministers confirmed the government is considering decriminalising non-payment of the licence fee, an offence that has landed many Britons in court and, although rarely, prison.

When last raised in 2015, the BBC said the measure would encourage evasion, costing it up to £200m in lost income. That figure could increase significantly if the move comes just as the BBC pursues millions of elderly users who have not paid the fee in years.

Mr Barwise said the Conservatives’ “obsession” with licence fee non-payment was an attempt to hurt the broadcaster.

One other traditional point of leverage will soon be available to Mr Johnson: appointments.

Tony Hall has been director-general since 2012 and is expected to leave during this parliament. Senior insiders at the BBC expect him to depart either after the 2022 centenary or well before, so his successor has time to prepare.

The crucial decision would be made by the BBC’s board, but it is not entirely out of Mr Johnson’s control; the chairman and four non-executive directors are appointed by government recommendation. One early point of influence for Downing Street will be picking a replacement for David Clementi, the current chairman appointed for four years in 2017.

“It will be significant if they chose someone who is hostile towards the BBC,” Mr Barwise said. The appointment of an “apparatchik” or any other “obvious attempt at manipulating the BBC” would, however, be a risky move by the government.

Get alerts on BBC when a new story is published