Why the ‘body billboard’ tells the story of our times

The protest T-shirt has gained new currency in 2021

The protest, political or statement T-shirt is experiencing a renewed and shifting moment of popularity. Over the past year T-shirts have been used to signpost everything, from political allegiances to supporting favourite restaurants struggling to survive, and as a way of raising funds. One abiding image from the awards ceremonies last season was of the actresses Regina King and Uzo Aduba receiving their respective Emmys wearing T-shirts emblazoned with the face of Breonna Taylor. Supreme’s T-shirt with Takashi Murakami raised more than $1m for Covid-19 relief efforts, while US brand Fear of God raised $100,000 from the proceeds of its “GF” shirt – made in tribute to George Floyd – for his youngest daughter, Gianna.

But these T-shirts are also a crucial means of self-expression at a significant time. “T-shirts have become part of our identities,” says Kim Hastreiter, co-founder of Paper magazine and new community art project The New Now, who has an archive of over 400 T-shirts that she’s been collecting for more than 30 years. “It’s an analogue, tangible way for people to communicate who they are.” She also adds: “A good message T-shirt is like a historical marker that can tell the stories of the times they were created.”

Hastreiter’s interest in the power of T-shirts stems from memories of her mother wearing her “Impeach Nixon” T-shirt in the early ’70s. It was then that the graphic T-shirt – with messages extolling Black Power and the anti-Vietnam war movement – became a form of expression so effective that The New York Times dubbed the T-shirt “the medium for a message”.

The turbulent year we’ve just lived through often feels like a flashback to 1968, a year marked by high-profile murders (of Martin Luther King Jr and Robert Kennedy), racial tensions and protests, a fiercely fought US presidential election and even a flu pandemic. As the Black Lives Matter protests grew to become the biggest grassroots demonstration of civil unrest in a generation, so protest T-shirts gained new currency as activists took to the streets, amplifying their message through the slogans on their chests. This year has seen T-shirts supporting other causes, from “Stop Asian Hate” to “Choose Earth” (£25, with all profits going to indigenous leaders across Brazil).

Dennis Nothdruft, co-curator of the exhibition T-Shirt: Cult – Culture – Subversion at the Fashion and Textile Museum in 2018 says all T-shirts have their place, even when they might be controversial. He points to Maria Grazia Chiuri’s 2016 debut at Dior, which featured a slogan T-shirt reading ‘‘We Should All Be Feminists”, a reference to Chimamanda Ngozi Adichie’s TED talk. “I can see where people think it’s a marketing exercise but she got people really talking about it and it elevated the discussion around feminism,” he says. While a T-shirt may be the most basic garment, “it can also be the most powerful body billboard or way to verbalise one’s beliefs and politics”. With Grazia Chiuri, “it set out her stall as the new designer at Dior and her feminist beliefs”.

We feel voiceless under the present government, and protest T-shirts give you a voice”

Few designers have been able to stoke controversy through the medium of T-shirts as mischievously as Katharine Hamnett. Over the years, the designer has promoted messages like “Choose Life”, “Worldwide Nuclear Ban Now” and “Cancel Brexit”, and recently partnered with sustainable fashion designer Patrick McDowell to make a capsule collection of jackets and T-shirts (from £110) printed with the word “HELP” designed to highlight the negative effects of Brexit on the fashion industry. “We feel voiceless under the present government and protest T-shirts give you a voice,” she says. “The tragedy is that they are even more relevant now than they were when I started making them, 39 years ago.”

For Hamnett, grabbing attention with a T-shirt is only the first step. “We haven’t done our bit until we’ve effected change,” she says. “We need to write to our MPs. We must follow it up with action otherwise it’s a waste of time.”

2021 — year of renewal
The future of fashion is old clothes 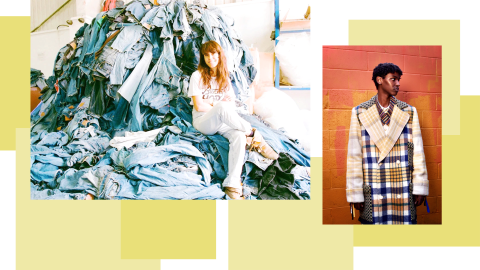 Recently, artists have also taken up the baton, creating politicised T-shirts as collectable artworks. Sterling Ruby’s one-off handcrafted pieces (for his brand SR STUDIO LA CA) are considered part of his catalogue raisonné: his Death Angel T-shirts ($3,500) are juxtaposed with the covers of some of his favourite books, including Hannah Arendt’s On Violence, Audre Lorde’s The Master’s Tools Will Never Dismantle The Master’s House and James Baldwin’s Dark Days. These works are equal parts “exercises in appropriation, hybrids of politicised language and highly designed fonts”, he says. “These are all things that I wore when I was younger. It’s a reminder of where I came from, my earliest group of friends and how it shaped my working process as an artist today. I made these pieces during a politically dark, yet also hopeful time.”

Of course, there’s also the option to make a statement T-shirt all of one’s own. JJ Hudson (better known by his nom de plume, Dr Noki) has been chopping, slashing and collaging “brand subversions” (such as reworking the GAP logo to say “Gay” or hybridising Adidas tracksuits with heavy-metal T-shirts) ever since he was a student at Edinburgh College of Art. Now his influence can be seen in a new generation of designers such as Max Allen, Claire Barrow and Matty Bovan (with whom he’s collaborating on a capsule collection later this year) who share his passion for sustainability, recycling and make-do-and-mend. But a punk DIY ethos remains his overriding principle. He implores: “You can custom-build new ideas – things those brands can’t give you. Don’t buy me – copy me! Turn your bedroom into your own atelier.”

I still have my first (and only) attempt at customisation – a screenprint of the singer Aaliyah I did after her death. Ultimately, “the T-shirt is about communication”, agrees Nothdruft. “It’s a really basic way of telling the world who and what you are.” T-shirts tell the story of who we are, what we care about and what needs to change – now more so than ever.