The Frenchman discusses Britpop, Truffaut versus Godard and why he always, always wears a suit

My personal style signifier is a suit – I feel peaceful and strong when I wear one. Even when I go on holiday, I am the only guy on the plane in a suit – it drives my family crazy. What I wear is usually a mix between what I can produce at Husbands and what I find at flea markets, such as vintage Hermès sweaters.

The last thing I bought and loved was a gold Cartier Tank from 1977, with handpainted Roman numerals and a Paris dial. I searched for this watch for a long time, and finally found it on a website called Leboncoin. The seller was an old man from the south of France who told me that he bought the watch in Paris in the ’70s and used to wear it to Le Sept and Le Palace, which were the really trendy places to go in those days – he’d see Yves Saint Laurent and Karl Lagerfeld there. He wanted to make sure I would be really careful with it.

And on my wishlist is a pair of bespoke George Cleverley Oxford shoes. I am obsessed with the designs he made for Baron Alexis de Redé, a French aristocrat and loyal customer of Cleverley’s. His collection was very classic, made very thin for his feet and with a sloping heel – what we call in French a talon bottier.

The best gift I’ve given recently is a pair of vintage Dunlop Green Flash sneakers to my eldest son, who is 15. I’m a big fan of Britpop, and these were the sneakers of that movement. Frenchmen in general are quite fascinated by the Britpop era, because we don’t have this kind of strong, community style. I got these shoes on eBay – they are not produced any more, which is a pity.

And the best gift I’ve received recently is While We Were Getting High, a photography book by Kevin Cummins that documents Britpop. My team gave it to me – it has fantastic photos of guys wearing three-button jackets with denim, who tried not to be fashionable and yet were super-fashionable.

The best book I’ve read in the past year is Proust’s In Search of Lost Time, which sounds a bit show-offish, but I think it changed my life. I first read The Captive as a kid, but I think you can learn so many things from this novel, about psychology, love, men and women, relationships, about mystery and secrets. It builds such a life in seven parts. Sometimes it is difficult to read but it is really fun – he has such a good sense of humour. I also love Dostoevsky’s The Idiot.

The style moment that changed everything was when The Beatles met tailor Tommy Nutter in the ’60s. He designed the suits on the cover of Abbey Road – Lennon’s white suit, McCartney’s double-breasted number and Starr’s very long jacket. He got tailoring out of its comfort zone and showed you could wear a suit without being a banker. For me, it was momentous.

The grooming staple I’m never without is a Kiehl’s serum, which is the only product I use, and then perfume, which I change often to allow me to notice the scent. At the moment I switch between Bandit by Robert Piguet and Carnal Flower by Frédéric Malle. Frédéric Malle Carnal Flower EDP, £168 for 50ml. Kiehl’s Powerful-Strength Line-Reducing Concentrate, £54. Robert Piguet Bandit EDP, £155 for 100ml.

A designer I admire is Dries Van Noten. I think he has a kind of integrity and vision that few people in menswear have. He is not listening to the market – he’s creating the market. He has always reinvented himself but in an honest manner. His designs are always relevant.

When I need to feel inspired, I watch a bad movie with great style from the 1970s. And there are a lot of them. I recently rewatched Nicolas Roeg’s Don’t Look Now – I’m not a total fan of the script, but Julie Christie and Donald Sutherland are wearing the most beautiful tweeds.

The place I can’t wait to return to is the Arrábida reserve, south of Lisbon. I’m renovating an old ruined house in a small village there called Azeitao. I want to be able to stay there until the end of time, watching the sea under a blazing sun, drinking a huge cold beer while listening to old Portuguese people discussing the passing of time.

And the best souvenir I’ve brought home is an old Barbour jacket from a shop in Shimokitazawa in Tokyo. It’s the Bedale model, and it’s exactly what I wanted – too small and very short, so that it shows a shirt underneath.

I have recently rediscovered the gardens of the Palais Royal, near the Louvre. Paris is empty at the moment – the streets are sad but beautiful. Every morning, I get a strong coffee from a small, trendy place called Télescope and drink it in the gardens, disturbed only by a few joggers and old men who come to read their newspaper near the fountain. 5 Rue Villedo, 75001 Paris (+331 42 61 33 14)

My grooming guru is Elodie at Michel K Paris, which is on Rue des Mathurins in the 8th arrondissement. I have been going there for 10 years, and I discovered it by chance – it was the hairdresser beside the tailor where I used to spend all my money when I was a lawyer. Apparently, they once cut Anna Wintour’s hair. I go there once every couple of months, when my wife, Raphaelle, hasn’t cut my hair.

The podcast I’m listening to is Habitudes, from French magazine L’Etiquette. It’s only in French for now, but I believe they are working on an English version. They interview more or less well-known men about their relationship to clothes. I think we have to make men think about clothes again, and show that it’s not a frivolous thing: it’s very important, an expression of one’s self.

In my fridge you’ll always find cheese, to feed my stomach. It’s shameful but I can’t cook. So when I am alone at home, I have the small pleasure of watching an old film with good wine and cheese. I apologise for being so obviously French.

My style icons are everyday people – old men who you see on the streets of Paris, London or Tokyo. I used to be obsessed with what Serge Gainsbourg or Michel Leiris wore. But now, at 50 years of age, I don’t have style icons any more – it’s more about the way people conduct themselves, the way they treat other people. I have a lot of respect for people who are nice.

The Aesthete
Adrien Sauvage: ‘If men paid more attention to the details, they might have more party chat’ 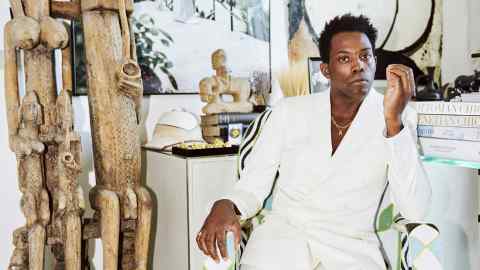 With time on my hands, I have been watching every film by François Truffaut. For the longest time, my preference was for Godard, who is much more stylish, visually speaking. But over time, I have become more sensitive to Truffaut’s project, to his love for his characters, for his actors. And his life was full of mysteries and secrets – and I love mysterious people.

The app I couldn’t do without is Nike Run Club. I decided five years ago that I would try to run two or three times a week to stay in good shape. I don’t like running, to be honest, but I think it’s important for your mind and creativity. My record is 10km in 42 minutes. I tend to wear shorts, a vintage Fila Bjorn Borg jacket and Brooks Adrenaline GTS 21 shoes.

The accessories I’ll keep to pass on are three watches to each of my kids. I have the Cartier Tank, a ’54 Patek Philippe from my father, and a small Rolex Bubbleback from the ’30s, which I discovered in a little shop in Paris. My favourite son will get the Cartier.

The one artist whose work I would collect if I could is Ellsworth Kelly. I am fascinated by all his works, from sculptures to paintings, and his ability to do so much with such aridity and minimal form and colour. It’s so complicated to keep things simple. I have also just discovered the work of Agnes Martin – I would die for the blues of “Summer” (1964).

The last music I downloaded was “I’m Still Standing” by Elton John. I’m not really a big fan – I prefer indie music or people like Bowie, The Rolling Stones and The Stooges. But my kids totally fell in love with the Rocketman biopic, so I thought I would give his music a go.

My favourite website is Tumblr. I don’t really like Instagram because everything is so controlled – it’s not great for discovering things. But on Tumblr, there are surprises everywhere: suddenly, you come across six years of archives of a young teenager who is passionate about Serge Gainsbourg, or find a young guy in Tokyo who loves French New Wave cinema.

The last item of clothing I added to my wardrobe was a pair of glossy Chelsea boots from Husbands. If you have a classic outfit – let’s say a chalk-stripe three-piece suit – but you wear it with glossy shoes, it changes everything. You were Winston Churchill and suddenly you are Mick Jagger or Bryan Ferry, by altering just one detail.

Correction on 22 March 2021 – The Cartier Tank mentioned in the second question dates from 1977, not 1987 as originally stated.