For SS19, Raf Simons took a cult film and hit it right on the nose. Cos it was a shark. Geddit?

There were no subtleties in the references here. From the John Williams soundtrack, to the blood-red floor, to the scuba suits sprayed with water, goggle-strap harnesses and red fisherman beanies, this was a full-blown shark attack. There was even a Jaws T-shirt, a print of the 1975 film poster emblazoned with the Calvin Klein logo.

“What does the scuba represent?” asked a diligent journalist of the designer, backstage. “It represents the movie,” he replied, before adding. “And protection. Scuba can be very sensual also, I suppose. It depends on who you’re seeing at the beach.”

Another question. Had he considered Jaws an allegory for the state of US politics today? Not really. It was all more personal than that. When he described wanting the show to be “cinematic”, it was because he feels that life is like a film. “Some interactions can turn into the ultimate beauty, or they can be the ultimate disaster.”

It doesn’t pay to overthink Simons’ process. Although he occupies hallowed ground within the industry, and is treated with a near-academic respect, his motives often seem more instinctive than intellectual. He has always had a keen emotional response to movies and music, and so he likes to draw on them for work. It’s as straightforward as it seems.

Jaws wasn’t the only film that had excited him for Spring. The mortarboards and academic gowns were a nod to — yes, you guessed it — The Graduate. The big-shouldered blazers and pleated school skirts lent an Ivy League flavour to the drama. And very nice they were, too.

Owned by the American fashion group PVH, Calvin Klein has been enjoying steady growth since Simons’ first show in February 2017. In the second quarter report published last month, the company announced that revenue in the Calvin Klein business had increased 18 per cent to $925m compared to the same period the previous year, with demand in Europe and Asia being particularly strong. It also reported a boost in the wholesale business.

Simons, who oversees the creative direction of all Calvin Klein, including the fragrance, denim and underwear categories that really drive its sales, has been brilliant at co-ordinating a single vision for the brand that ticks the codes of cool Americana without alienating his bigger, broader client base. And this collection was a good example of that. Cleverly uncomplicated, it combined clothes to keep the fashionistas happy — such as the pretty party gowns with floral scuba lining, and rubbery diver’s boots with pointed toes — with colourful, pop-y pieces and underpants that will have mass appeal. The Jaws T-shirts may have been some of the most basic things I’ve seen, but I’ll probably want one come the spring. 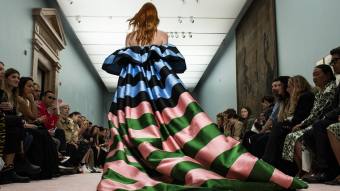