Investor inflows jump to $488bn in first nine months of 2020

Net flows into exchange traded funds have jumped 40 per cent so far this year with the growing shift into low-cost index tracking vehicles forcing the pace of consolidation across the asset management industry to accelerate markedly.

Morgan Stanley agreed last week to stump up $7bn to acquire Eaton Vance while Franklin Templeton paid $6.5bn to buy Legg Mason earlier this year, two deals that illustrate how traditional active managers are being compelled to reconfigure their businesses in response to ferocious competition from ETF providers.

“The pressures on active fund managers to find ways to respond to the rise of ETFs have become irresistible. The growth of ETFs is a global tectonic shift that has gathered pace since the 2007/08 financial crisis.” said Deborah Fuhr, founder of ETFGI, a London-based consultancy.

Investors have ploughed $488.2bn into ETFs (funds and products) in the first nine months of the year compared with $349bn in the same period in 2019, according to ETFGI.

Vanguard holds a clear lead over rival ETF providers as the race to attract investors’ cash enters the final quarter of 2020.

Pennsylvania-based Vanguard registered net ETF inflows of $134.3bn in the first nine months of 2020, up 73 per cent on the same period last year and already surpassing the $119.3bn it gathered over the whole of 2019.

Some asset managers have complained privately that Vanguard’s ETF flows have been inflated because it has allowed clients to switch from the Admiral share class of its mutual funds into the lower cost ETF without incurring any extra charges.

“Not all of Vanguard’s ETF inflows are real,” complained a rival provider that declined to be named.

BlackRock, the world’s largest asset manager, has attracted inflows of $106.3bn so far this year into its iShares ETF unit, only marginally ahead of the $105.2bn registered in the first nine months of 2019.

State Street Global Advisors, the third largest ETF provider globally, has drawn inflows of $21bn so far this year, more than double the $8.1bn gathered in the first three quarters last year. State Street runs the world’s largest gold ETF and has been boosted by record demand from investors for physically-backed bullion ETFs.

Invesco, the number four player globally, has seen ETF inflows increase 22.8 per cent to $19.4bn this year, helped by the strong performance of technology stocks. Invesco’s most popular ETF, known as QQQ, tracks the tech-heavy Nasdaq index, which hit an all-time high in early September.

Although Invesco’s ETF unit is ahead compared with last year, other parts of its business have suffered substantial outflows that have weighed on the share price of the Atlanta-based asset manager since the start of 2018. Invesco’s share price has rallied over the past week on hopes that Nelson Peltz, the high profile activist investor, will engineer a deal with Janus Henderson.

The grinding competitive pressures exerted by BlackRock and Vanguard appear to be weighing on other rivals as well. Charles Schwab, one of the most prominent competitors in the ongoing fee war among ETF providers, has seen a disappointing slowdown in 2020. Cash inflows for Schwab’s ETF business have dropped 56 per cent to just under $8bn so far this year.

The S&P 500 reached an all-time high in September but European stock markets have not fully recovered losses sustained earlier this year as a result of the coronavirus pandemic. The relatively muted recovery for European stocks has weighed on new business growth for some ETF providers located in Europe. Amundi and UBS have both seen ETF inflows decline significantly this year.

Rumours have resurfaced that Lyxor, the Paris-based asset manager, will be sold by its owner Société Générale because the French bank wants to strengthen its balance sheet. Lyxor has seen ETF inflows of $1.3bn in the first nine months, a marked improvement compared with 2019 when it registered full-year outflows of $5.5bn, according to ETFGI. 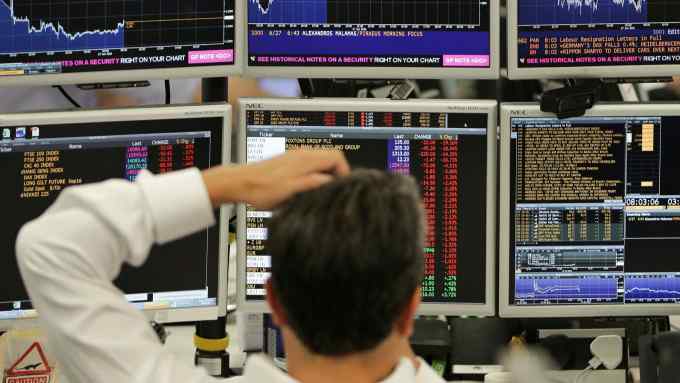