The trailblazing fizz of Rusty Rabbit

The wine-maker and cancer activist talks champagne and philanthropy

There are many things that are out of the ordinary about Lapin Rouillé. It’s one of only three marques wholly owned by a black female in Champagne. It’s a zero-dosage, 100 per cent meunier recipe, which goes against the grain. But the thing that really strikes you as you go to untwist the cork’s wire cage on the Brut is the image on top of the cork: a smiling portrait of a black woman in middle age.

That woman, Hazel Lee Brown, is the late grandmother of Nichole Johnson, the 38-year-old CEO of drinks agency Rusty Rabbit International and the creator of Lapin Rouillé. “My grandmother was such a strong figure in our community when I was growing up – she was a real inspiration to me,” says Johnson. “She gave me the nickname Rusty Rabbit. After she died from uterine cancer in 2017 I named my company and my champagne in her memory.”

Johnson was raised in California by parents who both worked for the American brewer Anheuser-Busch. As a child she often accompanied her father on work trips to Europe. It was there, in Champagne, that she befriended the family behind Champagne Bourdaire-Gallois, the eight-hectare organic estate where Lapin Rouillé is produced.

Cancer ran amok in my family

Family connections run strong throughout the Lapin Rouillé range: Johnson’s mother is on the rosé; her paternal grandmother’s on the demi-sec. Her sister Avelina is on the blanc de blancs. But this gallery commemorates more than just family ties: all of these women have battled, survived or succumbed to cancer at some point in their life. “Unfortunately it has run amok in my family on both the maternal and paternal side,” says Johnson.

In November 2020, just months before launch, Johnson discovered she had cancer too. “I was diagnosed with stage-two vaginal cancer, which requires aggressive treatment. And the whole experience was a real eye-opener for me because I learned, through my own experience and through speaking to other women, that women of colour, and black women particularly, are not listened to, not advocated for and not fought for as they should be, compared with other ethnicities.”

Johnson’s answer was to found Rusty Rabbit Cares, a foundation raising awareness of, and funding for, cancer treatment and care for black women on both sides of the Atlantic. “In most countries, women of colour are the least likely to be listened to or believed when expressing their health concerns,” says Johnson. “So we want to help to challenge that system and give back.”

In the case of breast cancer, black women are around 40 per cent more likely to die of it than white women, according to the Susan G Komen foundation, the world’s largest non-profit source of funding for the fight against breast cancer. Black women are also more likely to be diagnosed with breast cancer at a younger age and at a later stage. This gross lack of parity, according to Komen, is down to a combination of factors: financial and social barriers to early diagnosis, treatment and care; discrimination and systemic racism in the medical world; and a susceptibility among black women to certain, particularly aggressive, forms of breast cancer.

These problems are exacerbated by a simple lack of data on cancer in ethnic minority groups. Researchers behind a recent study in the US that found a genetic link between people with African ancestry and an aggressive type of breast cancer called on more black people to get involved in clinical trials in a bid to improve survival rates for people with the disease.

From January, $1 (or £1 in the UK) from every bottle of Lapin Rouillé sold through the company’s site will go to the Rusty Rabbit Cares foundation. The brand is also calling on restaurants and bars to donate a portion of profits from by-the-glass sales. These funds will then go towards funding cancer treatment for black women in the UK and US. The fund officially launches on 28 December, but has already contributed to treatment for women on both sides of the Atlantic; it has also pledged its support for the EnCourage Kids Foundation, a charity that works to enhance the lives of children receiving hospital treatment for cancer and other critical illnesses in the US. 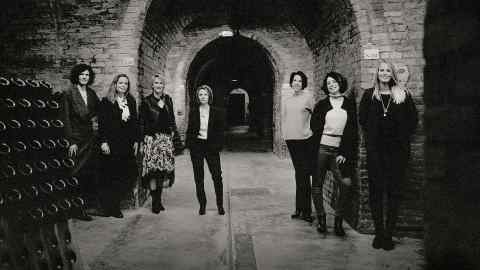 “Next year I plan to hold a Lapin Rouillé Trésor fundraiser event showcasing black excellence in food, music, fashion, art, wine and spirits,” adds Johnson. A partnership with Ebony magazine is also in the pipeline.

When we speak, Johnson is in the middle of another gruelling programme of chemo, radiation and surgery. She is drained but not deterred.

“Right now, I am a small brand with a big vision. But anyone who knows me, knows I shoot for the stars. So while I have breath left in my body, that’s exactly what I am going to do.”