Chancellor Philip Hammond is set to receive a multibillion-pound windfall for the public finances when he presents his spring statement on March 13, increasing the size of his promised “deal dividend” if MPs finally back the government’s Brexit agreement.

Mr Hammond has promised to increase public spending if MPs approve Theresa May’s withdrawal treaty and pave the way for a smooth Brexit. A tax revenue windfall will add to the incentive for MPs to vote for the exit deal.

In his October Budget, Mr Hammond said he had £15.4bn of room for manoeuvre, but warned that some of that money might be needed to prop up the economy in the event of a disorderly no-deal exit.

In his spring statement, Mr Hammond will have more leeway because of buoyant income tax receipts, with self-assessment returns paid in January especially strong.

If the threat of a no-deal exit were removed, he would spend some of this enlarged “insurance fund” to boost stretched public services.

The chancellor will publish forecasts from the independent Office for Budget Responsibility that will show better than expected public finances over the next five years, despite cuts in the economic growth forecast for 2019.

Mr Hammond’s statement will come within days, or perhaps even hours, of a crucial Commons vote on a revised Brexit deal, which Mrs May has promised will take place by March 12 at the latest.

If the deal is rejected for a second time, MPs would vote on March 13, immediately after Mr Hammond’s spring statement, on whether to reject a no-deal exit. A further vote on delaying Brexit would take place the next day.

In the event of the deal being thrown out by MPs, Mr Hammond would confront MPs with a stark choice: if they voted to allow a no-deal exit, they would be putting at risk billions of pounds of extra spending on schools, police and other public services.

The budgetary bonus associated with a Brexit deal will not be spent immediately, with Treasury officials saying there will be no new tax or spending measures announced in the statement.

Instead, Mr Hammond would make more money available in the public spending review later this year. Because he has already agreed to spend an extra £20bn a year on the NHS by 2023, other public services are fighting for a share of a smaller cake.

Evidence of growing income inequality last week from the Office for National Statistics, with the wages of the highest earners rising fastest, is also likely to encourage the OBR to produce a longer-term bullish income tax revenue forecast: high earners pay a larger share of their income in tax. 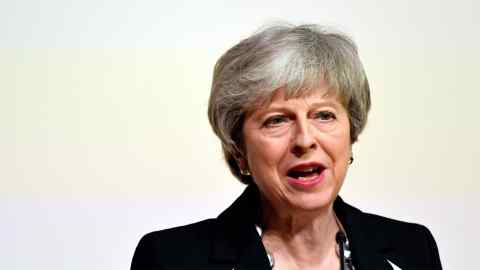 Although other revenues are not showing anything like the strength of income tax, Mr Hammond’s budgetary arithmetic will also be helped by market expectations of lower longer-term interest rates than in October.

With expectations of the Bank of England’s main interest rate down almost half a percentage point since the autumn, it will allow the OBR to cut its forecasts for the debt interest burden.

In contrast to the healthy public finance forecasts, the OBR will cut the economy growth forecast for 2019 to reflect weakness at the end of 2018, which has persisted into the start of this year as Brexit uncertainty has removed corporate risk appetite.

But the fiscal watchdog’s forecasting techniques, which are ultimately governed by its view on the long-term prospects for the UK economy, suggest that after a dip at the start of this year, it expects a period of moderately faster catch-up growth.

The OBR will base its forecasts on an assumption of a smooth Brexit, and it will not add in the £15bn a year hit to the public finances from coming changes to the accounting treatment of student loans.