Ten large pharmaceutical companies, including Johnson & Johnson, AstraZeneca and GSK, are embarking on the first collaboration to train their drug-discovery, machine-learning algorithms on each other’s data.

Owkin, a Google Ventures-backed start-up based in New York and Paris, has developed a secure, blockchain-based system that allows an algorithm to trawl competitors’ data with full traceability — but crucially, without revealing commercial secrets to rivals.

The machine-learning algorithm improves the models that predict how molecules will work, in the hope of accelerating the expensive and cumbersome drug discovery process. It costs an average of €1.9bn and 13 years to bring a drug to market, according to a 2016 paper in the Journal of Health Economics.

Mathieu Galtier, who co-ordinates the project for Owkin, said it aimed to significantly speed up the search process and understanding of which compounds might work as drugs.

“The big goal here is to accelerate and reduce the cost of the discovery of drugs,” he said.

Investors are flocking to start-ups trying to use artificial intelligence to improve the sometimes haphazard drug discovery process.

In the US, Schrödinger, a platform backed by Bill Gates and hedge fund manager David E Shaw, recently closed a $110m funding round; last year Boston-based Relay Therapeutics raised $400m from investors including the SoftBank Vision Fund; and Insitro has raised more than $100m from venture capitalists such as Andreessen Horowitz. In the UK, Genomics Plc, a spinout from the University of Oxford, signed a drug discovery deal with Vertex Pharmaceuticals, the biotech company.

But while pharmaceutical companies have become customers of these start-ups, the Melloddy project — which stands for Machine Learning Ledger Orchestration for Drug Discovery — marks the first time they have shared data with each other. If successful, it could encourage the rivals to open up more data, including the results of pre-clinical studies.

Hugo Ceulemans, the Melloddy project leader, said the initiative had the potential to improve patient care.

The Melloddy research consortium has €10m “in kind” funding from each company and €8m from the EU Innovative Medicines Initiative, a public-private partnership. Some 17 partners including two European universities, four start-ups and Nvidia, the chipmaker, as well as the 10 pharmaceutical companies, form the consortium. 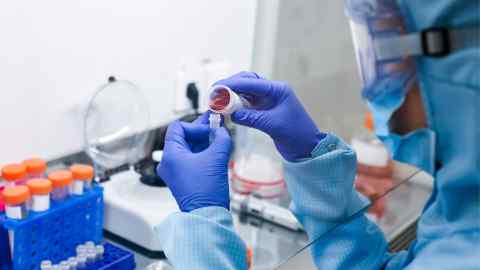 By using “federated learning”, a decentralised type of machine learning, pharma companies can keep the data from their chemical libraries inside their own infrastructure. Mr Galtier said Melloddy used blockchain because it meant pharma companies could trust the code, rather than their partners.

“We want absolute traceability of all operations made on the platform. It is very important that each pharma partner knows they are being treated on equal grounds, to make sure what is happening to their data is transparent so they can check it afterwards,” he said.