Formula E will not overtake Formula One — and nor should it

There is space for the two motorsports: both offer thrilling racing, but a different ethos
Susie Wolff

Since arriving in Formula E last year, one of the questions I’m most frequently asked is: Will Formula E ever replace Formula One? The short answer, in my view, is no. More to the point, nor should it: the two series are so very different.

Now in its fifth season, Formula E is like a tech start-up. What started in 2011 as a vision of two men — Jean Todt, the FIA president, and Alejandro Agag, Formula E’s chairman — has quickly grown into a global sport, attracting some of the world’s top automotive manufacturers.

Their timing was impeccable; the “dieselgate” scandal in 2015, which found that Volkswagen was cheating diesel emissions tests, left motor manufacturers in no doubt about the power of the electric revolution.

But the ABB FIA Formula E championship is still in its infancy. On March 10 2019, the streets of Hong Kong played host to the series’ 50th race; skip forward a week to Albert Park in Melbourne, Australia, where F1 celebrated the 998th race of the world championships, and you can begin to see why they should not be compared.

Formula E has been unafraid to innovate — not just about its cars, but also in how it attracts followers. Fanboost, where supporters vote to give their favourite driver a five-second burst of power in the second half of the race, is a prime example of Formula E’s management opening up the sport, experimenting with the race format and encouraging fans to get involved.

The city centre race locations have a huge part to play in the sport’s growing popularity too. Street tracks foster aggressive and opportunistic racing with very unpredictable results. Each of the six races so far this season has had a different winner, which makes for great viewing and competition.

F1 is not a level playing field but nor does it want to be. The myth and magic of F1 is its unapologetic elitism

The city locations also help to keep the sport open. It makes travelling to the races easier and some promoters subsidise tickets so fans can attend at a minimal cost, and sometimes for free.

The teams find an open door too. Mr Agag has made Formula E as level a playing field as possible for the competing teams. The car is predominantly standardised, for example, so the manufacturers only make certain parts themselves.

This stops teams investing vast sums of money into the technology of their cars (as you see in F1, where the whole car is designed, developed and built in-house) and opens up the competition — an experienced, opportunistic driver can have the biggest impact on the race result.

This is especially important as we see large manufacturers — such as Audi, BMW and soon Mercedes and Porsche — (and their wallets) flocking to join the series. It allows private teams like Venturi to take part and, most importantly, have a good chance of success against the big players.

F1 is most definitely not a level playing field but, most importantly, nor does it want to be. The myth and magic of F1 is its unapologetic elitism: it is the pinnacle of motorsport and teams have to be world class to be part of it.

To say F1 is big business would be an understatement. The 10 teams involved spend $2.6bn annually to take part, according to estimates from the consultancy firm Formula Money.

F1 and Formula E unite in their capacity to show thrilling racing, but each offers something different to motorsport fans

What is more, the difference between the budgets of the top teams and the bottom means participation is not for the faint-hearted or shallow-pocketed. The top teams generally spend about three times more than the smaller ones, according to Formula Money’s analysis.

You get plenty of bang for your buck. The audience reach of F1 is phenomenal: more than 490m unique viewers tuned in during 2018. F1 teams generate considerable income from commercial partnerships and share in the profits from the series too — the team prize money was estimated to be $913m for 2018.

F1 is all about the iconic glamour and action of seeing the most technologically advanced cars in the world compete. Formula E has a very different ethos: from the outset, the main aim has been to highlight the potential of electric tech, and to focus on sustainability and the crucial role of electric mobility.

This creates space for fans to support both series: F1 and Formula E unite in their capacity to show thrilling racing, but each offers something different to motorsport fans.

Nor do fans have to split their viewing. The Formula E race action mostly takes place on Saturdays, and is usually timed not to clash with F1 qualifying, so it’s easier for fans to watch both.

In this respect, I don’t think it is an either-or situation for the series. Neither sport can be complacent — both need to ensure they continue to innovate and attract fans — but that’s the same whether you are in the business of engines, footballs or any other sport. 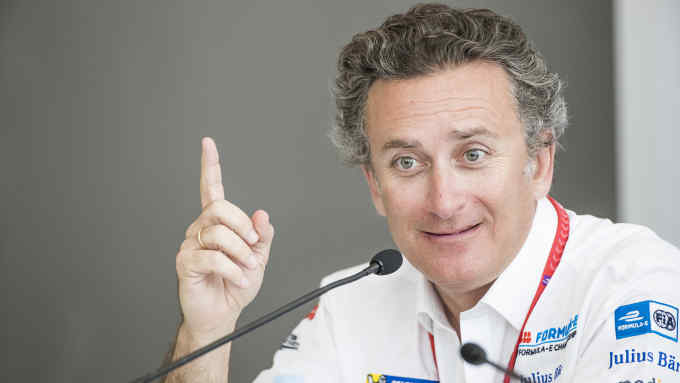