Long derided in the west for its unusual odour, the King of Fruits has been reclaimed by Asian cooks and writers as a symbol of belonging

Durian is a large, green, rugby-ball-shaped fruit native to Malaysia, Indonesia and Brunei and now grown in several other countries including Thailand and Vietnam. Known as the “King of Fruits”, it weighs up to 4kg and is covered in spikes (“duri” is Malay for thorn). During the season (usually May to August, but November and December in parts of south-east Asia), the business of acquiring and consuming durian can overshadow everything. Vendors pitch up at the sides of roads, their harvest piled high on tables, and families come and stock up. Opening a durian is tricky but every household has its resident expert, who knows exactly how to angle a cleaver between the seams and crack the fruit open to reveal its fleshy lobes. Used in jams and cakes, and in parts of West Sumatra made into a sambal with crushed chillis, durian is mostly enjoyed fresh, scooped from its pod and dripping with juice.

Durian is also an acquired taste, though nothing makes you want to acquire it more than the testimonies of those who revere it. Among the many western converts, 19th-century British explorer Alfred Russell Wallace hailed it as the perfect fruit for the “glutinous smoothness” of its pulp – like “a rich butter-like custard highly flavoured with almonds [and intermingled with whiffs of] cream-cheese, onion-sauce, brown-sherry and other incongruities”. As I said, an acquired taste. When I tried it, the fruit tasted a bit like sweet sautéed onions with ripe melon and perhaps a hint of corned beef. That may sound off-putting in a fruit. But once I got past my initial disorientation, the complex flavour grew more and more interesting with every bite.

Of course the aspect of durian that gets the most coverage is its smell, which is famously pungent and the cause of much controversy. How the fruit and its aroma are framed in the west has become a major bone of contention. I have seen the fruit’s appearance compared to “a medieval torture device” and its scent likened to “raw sewage”, “stale vomit” and “rotting flesh”. A 2020 New York Times piece stated how it “stinks of death”. While there’s no denying the potency of its musk (the fruit is banned on public transport in some Asian countries), it’s hardly surprising that durian enthusiasts have grown weary of the endlessly sensationalist language used to describe it.

“It’s racism and othering,” says London-based food writer and academic Anna Sulan Masing, whose father is Iban, an indigenous community in Sarawak, Malaysia. “You can write about how durian is not a flavour you like, as you might for blue cheese. And talk about complexity of flavour. But it’s rarely done like that. It’s more often an excuse to write subtly racist things.” This tends to amount to how smelly and weird the fruit is, and by implication how smelly and weird the people who eat it are too. For Masing, it’s one reason the south-east Asian diaspora cling to durian. “There’s a sense of reclaiming it,” she says. “So many have durian as their memory of going home and growing up. It’s a badge of honour. Sort of like, ‘I eat durian, I’m authentic.’” Certainly on her trips back to Malaysia, feasting on durian with family is often the first point of order, a welcome rite of homecoming. Now she’s even planning to get a durian tattoo.

In her new memoir The Book of Difficult Fruit, poet and essayist Kate Lebo (a white woman from Vancouver, Washington) takes on durian, which she became aware of mainly through clickbait articles about its smell, precisely in order to confront her own biases. She had to work hard not to fall into the traps she was trying to avoid. In one passage intended as objective description, she ended up changing “sensationally stinky” to “exceptionally odoriferous” after one Asian-American colleague objected to the negative connotations. At the same time, Lebo wanted to be honest about her own adverse reactions to the fruit, which she initially thought smelled like “turpentine” and “a cantaloupe that’s been left in the car”. “What I was trying to avoid,” she tells me, “is reinforcing the sense that just because I may think durian stinks, that it actually stinks. My perception is totally subjective.” 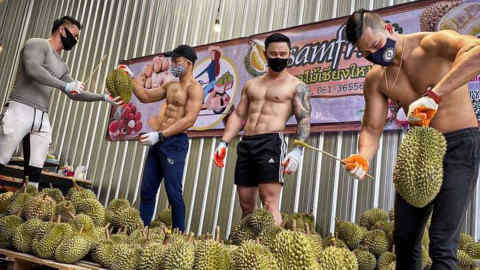 Over time, though, her sense of the fruit shifted and her experience became more about the complicated arc of acquiring a taste. “You don’t have to like durian. You don’t even have to try it,” she says. “But if you do, the right mindset is not holding your nose expecting something disgusting.” She became more attuned to durian’s sweeter flavours, particularly in ice cream (a natural iteration for durian thanks to its creaminess), which she made using frozen durian sweetened with condensed milk and topped with frozen shredded coconut. “The taste is creamy, nutty, even a little chocolatey and totally delicious.”