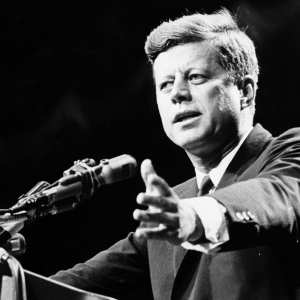 Sound engineers at a company called CereProc in Edinburgh have spliced together bits and pieces of John F Kennedy’s recorded speeches to recreate one of the most famous speeches that was never delivered: the 20-minute address that President Kennedy was due to have given at the Dallas Trade Mart, a few hours after he was assassinated in November 1963. Go to the FT's Work and Careers section to read Sam Leith's analysis of the oratory. Credit: The Times/Rothco/CereProc