This year’s first crop of watch releases saw a clutch of desirable chronographs from big hitters such as Cartier, Panerai, Vacheron Constantin, Zenith and TAG Heuer – and a delicious-looking pistachio-green addition to Breitling’s Premier Heritage Collection. But the really big news was the return of the Saxony-based A Lange & Söhne’s triple split-seconds chronograph, dubbed “the ultimate chronograph” when it was first released in 2018. The original came in super-restrained white gold with a grey dial; this new incarnation is altogether less self-effacing, presented in pink gold with a deep sea-blue dial in a limited edition of 100. 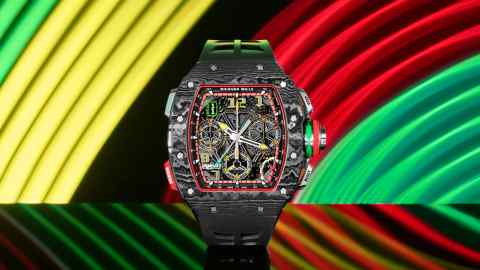 To create a split-seconds chronograph that can show comparative times of two opponents in a race up to a minute is mighty enough a technical feat of haute horlogerie; A Lange & Söhne’s watch crams in a complication that allows the wearer to show comparative times in opponents who are seconds, minutes or even hours apart – hence the triple-split moniker. Ultimate indeed: 567 tiny parts come together to make this so, and if you want to work out how the miniature engine made up of column wheels, clutches, rockers, levers, springs, jumpers – not to mention five gold chatons – goes about weaving its magic, it’s all on view through the watch’s sapphire-crystal caseback.

It’s perfect for an obsessive wanting to track the fluctuating fortunes of two cars in a Formula One race or cyclists in a Tour de France stage, says A Lange & Söhne, should you have a spare £152,100 and indeed the inclination. As someone who spent his childhood scoring every ball of three-day county-cricket games at Lord’s, I have no trouble imagining the inclination; raising the cash could prove more of a challenge.