Stop trying to make food that looks like the pictures

The rise of the anti-cookbook

Cookbooks have long been expressions of incredible design. From the current crop, just consider Jeremy Lee’s Cooking (4th Estate) with illustrations by John Broadley that bring to mind Eric Ravilious and Edward Bawden, or Cynthia Shanmugalingam’s Rambutan (Bloomsbury), a blaze of vibrant photography with shimmering pink graphics on the cover. But as cookbooks become ever grander –and costlier – do you ever feel what’s on offer is falling out of step with how you really live and cook?

Food writer Ruby Tandoh did, which is why she came up with the anti-aspirational Cook As You Are (Serpent’s Tail), a collection of recipes less about buying into a lifestyle and more about supporting people in their actual lives. According to publisher Cecily Gayford, the book has been reaching customers who wouldn’t ordinarily buy cookbooks. What distinguishes its design is the complete absence of photography: “By photographing a cookbook in one kitchen, with one cook,” Tandoh argues, “I’d be capturing only one very narrow vision of what cooking looks like and who these recipes are for.” Instead, the illustrations depict a range of different families and bodies, including people with disabilities. Its American editor Tom Pold hopes it will “spur a broader awareness of the need for more inclusive cookbooks, especially books that take into account mobility, disability and food costs”.

The upside of not using photography, says Tandoh, is you start to judge food by how it tastes, smells and looks to you and “not by whether it matches up with a photo staged by a food stylist”. Heston Blumenthal makes a similar point in his new release, Is This A Cookbook? (Bloomsbury). The book doesn’t dispense with food photography altogether, but it does acknowledge the enjoyment we find in cooking a dish as a primary benchmark of success, whether or not the dish resembles the pic. “Cookbooks generally obsess over the end result,” says Blumenthal’s long-time illustrator Dave McKean. “Heston certainly felt he had a reputation for being obsessed with perfection, whereas he’s always been about the process.” To this end, the recipes aren’t positioned opposite photographs of the final dish but illustrated pages packed with annotations and asides. The recipe pages represent “Human Doing” (the task of following instructions), while the illustrated pages represent “Human Being” (our creative and emotional response to cooking, often the greater source of pleasure). “Photography is the realm of explanation and illustration the realm of the imagination,” says McKean. “If parents and kids take this book into the kitchen together, we’ve achieved what we hoped for.”

The younger audience was also important to the team behind The River Café’s newest release, which started off as a cookbook for kids and ended up as The River Café Look Book, Recipes for Kids of all Ages (Phaidon). As chef-owner Ruth Rogers puts it, why exclude the grown-ups? In a break from convention, the food photography sits in the front “Look” section with the recipes listed separately at the back. Flipping through the first 100 pages is a bit like scrolling through Instagram, but the arrangement was inspired by a collection of books Ruth’s late husband, architect Richard Rogers, used after suffering a brain injury. Designed for patients with neurological disorders, the books consist of a series of juxtaposed images – a chandelier next to a crying baby, say – whose uncertain relationship the patient is encouraged to articulate. In The River Café Look Book, photos of dishes are similarly paired with unrelated scenes that nonetheless conjure up curious, often wondrous visual echoes: a vase of wilting tulips opposite a plate of spaghetti alle vongole; a pink telephone opposite a dish of raspberry sorbet. The purpose is to entertain but also inspire young readers to think about cooking as “more than just science, rigorous and measured”, the introduction suggests. “[Cooking] is also art – a picture on a plate.”

It’s joy too, says Ruth. And that’s certainly the feeling you get when you see the pages are printed every colour of the rainbow, a nod to Terminal 4 at Adolfo Suárez Madrid-Barajas Airport, one of Richard Rogers’ most joyful projects. In this sense at least, the design of the book, which is dedicated to Ruth’s husband “who taught us to look”, conveys another valuable truth about cooking – that it’s so often about family and communing with the people we love.

HTSI
Why Iwan and Manuela Wirth have hit the pub 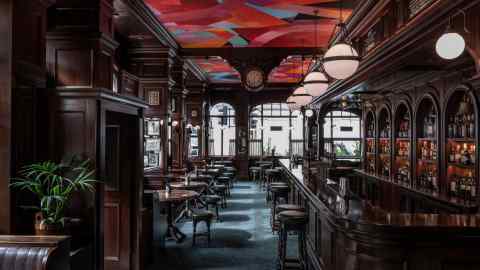