UK government officials have recommended that the Chinese telecoms company Huawei should be given a limited role in developing fifth-generation mobile networks in Britain, highlighting an “absence of alternative” suppliers.

Boris Johnson, UK prime minister, has been under intense pressure from the US and other western allies to ban Huawei from the entire system, on the basis that any involvement by the Chinese company in 5G presents a security risk.

Washington has also threatened that a UK decision to use Huawei equipment will put future intelligence-sharing among the “Five Eyes” partners in jeopardy, a claim denied by British intelligence officials.

At a meeting on Wednesday, UK civil servants presented their assessment that Britain could safely proceed with Huawei at the periphery of future 5G networks, rather than in the sensitive core, according to government officials. The final decision will be made by the National Security Council next week.

There are other providers but they are limited

One government official suggested there had been a market failure but added “we are where we are.”

Andrea Leadsom, the business secretary, expressed similar views on Thursday, saying that there were few alternatives to Huawei.

“There are other providers but they are limited,” she told Sky News. “Ideally there would be more providers of infrastructure similar to the work Huawei does . . . l’ll be making a final decision soon,” she added. “I share the concerns of many citizens about protecting our national security interest.”

The US attempted a last-ditch lobbying effort last week, sending a delegation of senior trade and security officials to London to present what they claimed was new intelligence on the threat posed by Huawei.

After meetings in government, the US officials told reporters that it would be “nothing short of madness” for the UK to go ahead with the Chinese company, warning that it “carries the risk of compromising infrastructure, private citizens’ data and corporate secrets and sensitive information. It raises the question, why do any amount of business with people you don’t trust?” 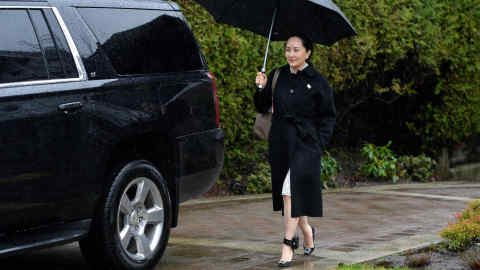 The US delegation also denied an assessment by MI5 chief Andrew Parker, who told the Financial Times this month he had “no reason” to think that intelligence-sharing agreements between the two countries would be affected by Huawei’s involvement in 5G.

Huawei has consistently said it is a private company without state interference. Last week Victor Zhang, vice-president of Huawei, said: “We are confident that the UK government will make a decision based upon evidence, as opposed to unsubstantiated allegations. Two UK parliamentary committees concluded there is no technical reason to ban us from supplying 5G equipment.”