An Oxford undergraduate again — in my late 50s

Returning to university education, rowing and epic bouts of drinking

This summer, in common with most BA candidates studying English literature at Oxford university, I graduated with a 2:1.

No number can sum up the amazing experience of being a full-time undergraduate in my late fifties, scaling the generational divide like a college ball gatecrasher. An unusual situation intensified by a sense of déjà vu. Having read philosophy, politics and economics at Oxford in the seventies, I graduated feeling I had not made the grade. This sense of being an imposter among geniuses is common at Oxford, I’ve discovered.

After a career in journalism and child-rearing, I was attempting to explain Sylvia Plath’s agonised poetry to my bored GCSE-candidate son when I realised — I should be studying literature.

Initially, I went one evening a week to Oxford’s Department for Continuing Education. Having gained its certificate in English literature, I had the credentials to tackle the three-year degree course.

My family were supportive. My cleaner undertook the cooking, but I worried about the impact on my 14-year-old daughter. Vowing to drop the course if it all went pear-shaped at home, I took up residence at Harris Manchester College, Oxford’s college for mature students, many in their mid-twenties.

My strategy was to forget about age as I joined in beer pong matches, karaoke and discos. Nocturnal mating rituals remained a mystery, however, as I avoided late-night clubbing. My son — by now aged 21 — was an Oxford postgraduate, which he jokingly lorded over me, a lowly first-year. He often visited my college since the food was better, but stopped short of bringing his dirty laundry.

Three weeks before term started, my father died. I took to heart his urging to live my life, and regarded each day of my three years at Oxford as a gift.

In 1976, the year Oxford women rowers won their own racing division, I rowed for St Catherine’s College. Some 39 years later at the freshers’ fair, I hitched my dress into borrowed shorts and passed a fitness test to join Wadham’s third women’s eight.

Next Act
Lucy Kellaway on teaching: ‘I have marvelled at my own hubris’ 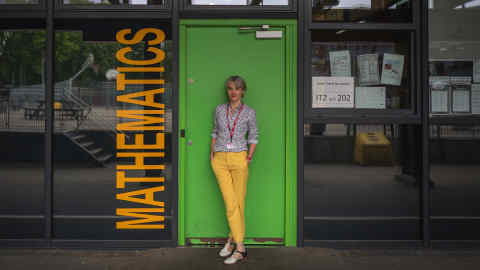 Although the 18-year-olds could see I was three times their age, they were far too nice to say so. To glide past Port Meadow in a morning mist is sheer bliss. “Long and strong” at my oar, I’d think, as Keats, “now more than ever seems it rich to die”.

College racing is like tribal warfare. We daubed our faces with warpaint and wrote Anglo-Saxon mottos on our arms. The carnage of “bumping” at Torpids was like a Boys’ Own war, as I tried to explain to my uncomprehending tutor, a war poetry specialist.

Amazingly, my crew won “blades” at Summer Eights, and we each drank a pint of undiluted Pimm's amid cheering. Revels also accompany ritual “trashing” after exams; a cathartic explosion of fizz, dye-bombs and confetti. One (hugely popular) friend was trashed for hours after his finals, becoming a mountain of shaving foam, dye-bombs and fizz, jumping into the Cherwell, then being force-fed beer and pretzels while strapped to a tree. Next morning he appeared at breakfast, radiant with residual glitter, wearing a clean white shirt having risen from the dead-drunk. Our adoration soared.

I loved the monastic atmosphere of college, my room overlooking a courtyard, life’s rhythms marked by tolling bells. We ate in a Tudor dining hall, wearing subfusc for formal dinners. Our principal, Rev Dr Ralph Waller was a benign presence.

In my experience, students work harder now than in the seventies. Age had rusted my ability to retain facts, but essay deadlines kick-started the brain cells

Communal living focused on learning was the antidote to my stressed life in London, a city whose vicious materialism remains the stuff of Jacobean satire. Studying was relentless in the first year: two essays and an Anglo-Saxon commentary most weeks, plus lectures and “collections”. I didn’t go home during termtime much, as it disrupted my concentration.

In my experience, students work harder now than in the seventies. Age had rusted my ability to retain facts, but essay deadlines kick-started the brain cells. I earned a distinction in prelims. However, family life suffered, and from year two I went home at weekends, at some cost in mental focus.

I was privileged to study literature from Beowulf to Virginia Woolf under world experts, in one-to-one tutorials. College was an intense experience of mental effort and youthful high spirits. The inscription on Harris Manchester College’s bell tower holds true: “It’s later than you think. But it’s never too late.”

Nicole Sochor is a freelance contributor to the Financial Times