Catherine Martin on Birkenstocks, Bandoliers and life with Baz Luhrmann

The designer behind Elvis and The Great Gatsby talks personal taste

My personal style signifier is Birkenstocks. My addiction to wearing them became worse when I moved to the Gold Coast to film Elvis because they are ideal for a place like this. I love the special editions – I have everything from the Manolo Blahnik velvet ones to nearly every version of the Hotel Il Pellicano collaboration. People often marvel at how I’ve managed to match my Birkenstocks so precisely to my outfits.

The last thing I bought and loved was a huge order of beeswax candles by Tony Assness. He’s an Australian set designer and theatrical maestro whom I’ve known for at least 30 years, but his side business is making these beeswax candles. He sculpts them himself using 3D moulds, and they’re really extraordinary – quite modern in their aesthetic.

The last music I downloaded was “About Damn Time” by Lizzo. I am known as the musical troglodyte in our family, but my husband Baz [Luhrmann] and his assistant introduced me to Lizzo, and I’ve become an aficionado. Everyone in the house jokes that I only play Elton John, Dua Lipa and Lizzo on repeat.

The place that means a lot to me is Paris. I am half-French on my mother’s side, I grew up bilingual and we travelled to France from Sydney quite regularly as children. So it’s a special place where I go to recharge, to connect back to something inside myself, and to be in this sort of visual bath.

And the best souvenirs I’ve brought home are vintage live-edge tables that I got from the Elvis set. They are a style I never thought I would particularly like – basically pieces of wood that have been cut into slices, very organic-looking – but I absolutely love them now. They are an ode to Elvis Presley in the ’70s.

The best book I’ve read in the past year is Sapiens by Yuval Noah Harari. It resonated with me because we’re in this time of enormous human conflict and of people being so divided, and I think it’s important that we look at who we are and where we came from, so that we start to understand ourselves better and try to find more common ground.

The best gift I’ve given recently is a changing basket from Sacred Bundle, which is an Australian brand that makes cane children’s furniture. All my friends are having babies at the moment, so I have given a few of these now, usually with a little cane toy with bells inside. $140

And the best gift I’ve received is a vase by Dinosaur Designs, for my 25th wedding anniversary, from my son’s tutor. It’s double-ended, shaped like a “U” with a flat bottom, and almost looks like Carrara marble.

I have a large wardrobe – so I suppose you could say I collect clothes. But I try to give away as much as I possibly can, either to family or friends. If I think they’re pieces that are worthy of an archive, I’ll donate them to the Powerhouse Museum, which is our version of the V&A. My Oscar dresses went there, or I might give them a special opening-night dress that I had made, particularly if it’s by an Australian designer.

In my fridge you’ll always find Ruinart champagne and good smoked salmon; I could survive on those, maybe with an occasional glass of water and the odd rocket salad. Also parmesan cheese, sourdough and a crisper drawer full of vegetables. We tend to buy regularly in smaller quantities, and shop locally as much as possible.

I’ve recently discovered the Gold Coast. Before I came here [having grown up in Sydney], I thought it was the most parochial, boring, terrible place – the biggest backwater you could be assigned to. But it’s absolutely fantastic – the weather and food are amazing, the beaches are second to none, and the quality of life is great. It’s unpretentious to a degree, because it’s not trying to be a big city like New York or Paris or London. It’s just itself. I’m an idiot for not coming here 10 years ago.

The thing I couldn’t do without is my Bandolier. The sets that I work on are ginormous and I was constantly losing my phone during the day. Then I discovered these phone holders that you can also put your credit cards and AirPods in on a strap that you wear across your chest. I am now a hands-free phone person – it has simplified my life. From £110

The last item of clothing I added to my wardrobe was a Prada puffer, from the last collection, which is sage green with beading all over it. It’s too warm to wear on the Gold Coast, but I’m going to the US and Europe in January so I’ll get to wear it then.

An object I would never part with is my engagement ring, which has quite a romantic story to it. When Baz and I were in Mexico for Romeo + Juliet, we met a young man who came from a dynasty that had created the railways in Mexico; he wanted to work on the movie and travel to Australia to see the editing process, but he didn’t have any money. So Baz bartered with him for a piece of his family’s jewellery. The ring is a paisley shape that was made in Paris in the late ’50s, bought by the man’s grandfather. When Baz proposed, I was massively ungrateful because it wasn’t what I imagined; the ’90s were the time of the single-stone, Tiffany Claw setting, and it just seemed really over the top. But now I absolutely adore it.

The one artist whose work I would collect if I could is Manet. One of my favourite paintings is A Bar at the Folies-Bergère; I feel a connection to the barmaid at the centre of it, who has a look in her eye that I find haunting.

Botticelli’s The Birth of Venus made me realise how fresh, vibrant and modern images from the past could be

The beauty staple I’m never without is sunscreen, from an Australian brand called Rationale. I love the tinted serum and the Superfluid, which are both SPF50, because they are really easy to apply, very natural, and give your skin a nice glow. I also always wear Sycomore from Les Exclusifs de Chanel, because I love the smell of vetiver. Chanel Les Exclusifs Sycomore, £169 for 75ml. Rationale tinted serum, A$176 (about £98) for 30ml; Rationale Beautiful Skin Superfluid, about £57 for 30ml

My favourite room in my house is the living room, which leads out to the balcony that overlooks the ocean. The house is uncomplicated and tiny, built right on the beach in the late ’40s, before everyone was trying to get to the road. It has a small front yard, then a sand dune that rises up and an elevated footpath, then the beach. Sitting on the balcony is the perfect place to watch people, walking up and down with their dogs, talking, loving, riding bikes.

My favourite landmarks are the Place des Vosges in Paris and the Sydney Opera House. They are diametrically different: one is steeped in classical history, and the other is symbolic of a 20th-century push towards the modern and the new.

My wellbeing guru is Davina at Pilates Pad on the Gold Coast. I used to run a lot but developed a back injury last year, so I started doing Pilates as a kind of rehabilitation. I’m quite a cerebral person and quite out of contact with my body a lot of the time, so I love that you have to focus with Pilates and pay attention to your form.

In another life, I would have been a doctor. My family calls me Dr Martin as a joke, because whenever anyone is sick, they come to me and ask what they should do. As you can imagine, we are a relatively theatrical family, and someone is usually allegedly dying of something. I always point out to them that if they’re running around the house screaming and having a conniption, then they are probably not having a heart attack. 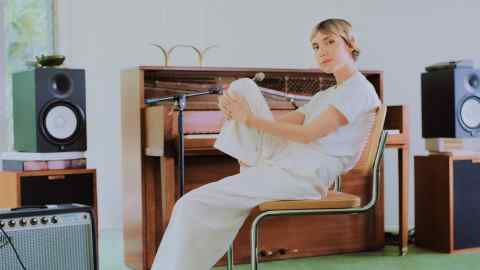 The work of art that changed everything for me was seeing Botticelli’s The Birth of Venus in the Uffizi Gallery at 15. It made me realise how fresh, vibrant and modern images from the past could be, and therefore not to assume historical references were doomed to be old and musty.

The best bit of advice I ever received was from my dad, who said that throughout his life he had more often regretted saying no to things than saying yes. I am now practising saying yes to a lot more. I’ve had my own mental-health struggles but now, at 57, I’m feeling great, and mentally strong.

Elvis is available now on Blu-ray, DVD and digital download