They stocked a secret larder with the world’s best products. Now they’re sharing it with us

Two gastronomes are launching a series of superlative food, wine and household provision sales. Will you be signing up?

“I was eating andouillette at the age of two,” says interior designer Christopher Prain of the notorious pig-intestine sausage, consumed on childhood holidays at French vineyards with his wine-obsessed father. Such gastronomic beginnings set Prain on a firm path to Wimps, a wine society that used to be based around The Ledbury restaurant in Notting Hill, where members would bring along special bottles of wine to accompany Brett Graham’s Michelin-starred cooking. And it was here that Prain, owner of design firm Christopher Chanond, met wine merchant Martin Buchanan.

A shared interest in fine things – “food and wine and the best household products and provisions” – led them to uncover the most outstanding small artisan producers. It was, to begin with, a personal adventure. But then: “We were hanging out in Piedmont,” says Buchanan, “and it occurred to us that we were enjoying the sort of products that it wasn’t easy for most people to source. So we thought: why not bring some of these discoveries to our existing clients and customers?” The House Supply Co was born.

In Calais, there is this amazing Spanish restaurant where we got our taste for ham

In essence, the company is a beautifully pared-down collection of the discoveries that Prain and Buchanan most love themselves. Their mission is to create four collections a year, each featuring between 10 and 20 producers, who will normally have four or five products on sale. Due to the small selection and limited availability, the list of items is only open for orders for a single week. Once it is closed, the orders are dispatched.

So far there has just been one selection of products, a litmus test made available only to those in their own address books – Prain’s interior-design clients and Buchanan’s wine customers. “It was a phenomenal success,” says Buchanan. “I think basically because we were offering up our secret finds to people who had already come to trust our judgement, and who shared our taste for delicious things.”

The second list opens to a wider audience today. Members who sign up (at no charge) will find small collections of mostly old-fashioned or traditional things – beautiful saucepans, fine linens, handmade jams and cured hams, coffee and wine, cookware and knives. They also do beds. “These are the things most of us consume or use every day,” says Prain. “But instead of being merely good, they are superlative, the best of their kind.”

Take the ironware. This comes from Netherton Foundry, a family-owned business based in Shropshire, and “inspired by the 18th and 19th centuries’ Shropshire iron masters”. The name, says Prain, “is well known to top chefs, but we believe many of our customers haven’t yet discovered them. We love their matte-black cast-iron pans, their casserole dishes, their omelette pans. They’re not only very beautiful, but very sturdy and good value.”

The wine glasses, by Austrian-based Zalto, are also used by many Michelin-starred restaurants around the world, and are all handcrafted in Zalto’s own factory from strong yet ultra-fine non-lead crystal glass. Again, they might be familiar among wine connoisseurs, but Prain believes they are still a niche product little known to the wider world.

One of Prain’s favourite products is a simple pair of scissors. “These are not just any old scissors,” he says. “They are Japanese engineered and the two blades come apart so that they can be properly washed. They never seem to need sharpening. And they last a lifetime.” Then there are the linens in an array of colours. “A Frenchman makes all our napkins from the finest Belgian linen. They can be plain or come with an initial.”

Look out too for beds – Prain and Buchanan found a small, trade-only supplier of great-quality handmade beds, through Prain’s interior-design work, and they’ve simplified the matter so that there are just three types of mattress available – soft, medium or hard. Duvets are from Norway. “We can supply a proper eider-filled duvet, though they may be up to £9,000,” says Prain. A more standard range filled with goose down is light and warm and starts from £550.

And so we come to the food and wine. “On our trips, Martin and I always stop to have a meal at Le Channel in Calais,” Prain tells me. “In this awful concrete town, there is this amazing Spanish restaurant that has wonderful wines. It is here we got our taste for ham.” Every list will always have a very special version. They particularly love the Hungarian Mangalitza pig, as well as the culatello di Zibello ham from northern Italy.

These are superlative versions of things we use every day

Buchanan – who through his company Buchanan Wines advises serious collectors around the world, as well as running a supper club in north Cornwall – is in charge of ferreting out exceptional wines from niche producers for each list. This time, he’s particularly proud of the Château Bel Air-Marquis d’Aligre 1996, at £45 per bottle. “It’s an old-fashioned vintage Bordeaux,” he says, “from the winemaker Jean-Pierre Boyer, who has just finished his 69th vintage – not a lot has changed in terms of style in almost 70 years. This is Bordeaux like it used to be, with no new oak, low-ish alcohol and no glycerol sweetness. These are wines for the dinner table.” He’s also offering what he believes to be a fantastic British sparkling wine made by Sugrue South Downs: The Trouble With Dreams 2014.

There’s also an array of cheeses nurtured (a process known as “élevage”) by a legendary affineur until they are in perfect condition, and a selection of condiments.

“We have,” says Prain in conclusion, “just the very best blackcurrant jam that I have ever tasted, from a supplier in Scotland. You will though,” he assures me, “have to buy at least six jars…” 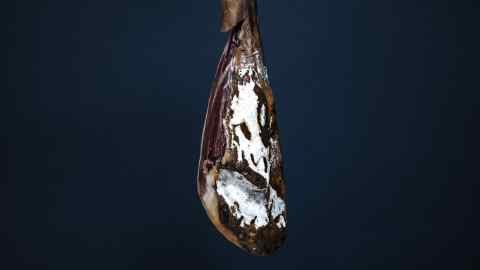