Lead the way with 50% off
Opinion The Commodities Note

Why the need for green hydrogen points to higher carbon prices

Sign up to myFT Daily Digest to be the first to know about Carbon trading news.

Given the economic shock to the European carbon market from Covid, the price of EU carbon allowances has held up remarkably well in recent months.

From a low of €14.30 a tonne in the early stages of the lockdowns across the EU, the benchmark December 2020 contract recovered to a near-record high of €30.80 a tonne in June, and has held at pre-Covid levels ever since.

This seems a clear sign that market participants are starting to think beyond coal-to-gas fuel switching in the power sector — until now the main price driver for the EU-ETS carbon market since its 2005 inception — as the determinant of pricing.

Indeed, we think there are three reasons for thinking that a whole new pricing paradigm for carbon could be in the offing. The cost of using green hydrogen — produced via electrolysers powered by wind and solar — instead of grey hydrogen, made via a carbon-intensive process involving natural gas, as fuel for industry is set to become the key pricing parameter over the next decade.

This could ultimately lead to a near doubling in the price of EU carbon allowances if market participants’ perception evolves as we would expect.

First, given that Brussels’ target of net-zero emissions by 2050 is soon to be EU law, there is now a clear endgame for the EU-ETS.

That endgame consists of ensuring that EUA prices reach the level required to achieve net-zero emissions by 2050, and in a significant step towards this goal the enhanced interim target to cut EU emissions by 55 per cent by 2030 recently proposed by the European Commission will now require a tighter EU-ETS cap in 2030.

Second, according to the European Commission’s recently launched strategic vision for green hydrogen, net-zero emissions by 2050 cannot be achieved without green hydrogen contributing a significant part of the solution.

At some point, therefore, EUAs will have to reach the price level that incentivises the use of green hydrogen over alternative fossil-fuel energy sources in buildings, transportation and power generation. 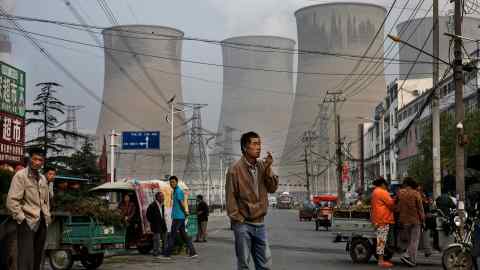 Third, the prerequisite for making green hydrogen commercially viable as an energy source is to make it commercially viable as an industrial feedstock by 2030. This is because it will always be cheaper for green hydrogen to go head-to-head with grey hydrogen as a feedstock than for it to go head-to-head with gas and oil as an energy source.

The production of grey hydrogen is already covered by the EU-ETS, and because this process emits 9kg of CO2 for every kg produced (equating to 0.27 tonnes of CO2 per megawatt-hour), green hydrogen can become competitive with it over the next decade at the right carbon price.

However, the cost of producing green hydrogen itself will need to fall sharply between now and 2030 for this to happen at a politically acceptable level.

If the cost of green hydrogen can indeed be reduced to €2-€2.25 per kg by 2030 — and there is a lot of research out there that says it can — then we think €79-€102 per tonne is a fair indication of the range in which EUAs would need to trade in 2030 in order for green hydrogen to displace grey hydrogen as a feedstock (assuming EU gas prices by 2030 of €15 per megawatt hour).

As a result, if the market thinks net zero is as serious a policy commitment as its likely soon-to-be legally binding status would imply, both compliance players and financial investors will at some point start to anticipate that the EU will do whatever it takes to engineer the conditions for prices to reach this level by 2030.

As such, today's price should ultimately reflect today’s perception of the future price required to deliver the policy goal adjusted for the time value of money.

Given the current very low interest-rate environment in the EU, we see the cost of capital for industrial and financial players in the EU-ETS ranging from 4-10 per cent.