The Irish border is the Brexit hurdle du jour. Now that Theresa May has informed EU leaders that she is able and willing to stump up more cash to aid an exit deal for the UK, finding a solution to avoid a hard border between Northern Ireland and the Republic of Ireland is the remaining obstacle to be cleared before “sufficient progress” can be declared and the talks move on to determining the shape of the future relationship between Britain and the EU. The ratcheting up of the rhetoric from all sides, however, is undermining hopes of a breakthrough in December’s crucial summit.

Leo Varadkar, the Irish prime minister, has infuriated London (and many Conservatives) by warning he may veto a move to phase two of the Brexit talks if he is not satisfied that the prospect of a hard border has been ruled out definitively. The Taoiseach might be playing to his domestic gallery — amid signs that another general election could be in the offing in Ireland — but his stance is encouraging a harder line to be taken in London, shredding what goodwill between the two capitals was left after the Brexit vote.

The simplest solution would be for Britain to maintain membership of the customs union. Yes, it would limit the UK’s ability to strike trade deals after Brexit, but how many Leave voters would genuinely revolt? It might require a compromise on ending free movement of people, but it would protect the UK’s car industry. It would also require the British prime minister to face down the most ardent Eurosceptics in her party — something she has hitherto avoided. But there is one even bigger obstacle preventing a softer Brexit to solve the Irish border problem: the Democratic Unionist party.

The DUP are hardline Brexiters, putting a straitjacket around Mrs May on the Irish issue and limiting her room for compromise

Following Mrs May’s failure to win a working majority in June’s general election, she struck a supply and confidence agreement with the Northern Irish party to remain in power. Many Tory MPs privately opposed the deal, worried about the damage it could do to its reputation and fearing that the princely sum of £1.5bn, the price of the agreement with the DUP, would come to haunt them. A substantial chunk of the electorate felt similarly: when the pact was announced, only 8 per cent approved. Team May calculated that most voters would not understand or notice the agreement. That might have been true had the DUP remained silent partners. But the megaphone from Belfast has been in regular use since the agreement was struck.

The DUP are hardline Brexiters, putting a straitjacket around Mrs May on the Irish issue and limiting her room for compromise. At the party’s conference this week, its leader Arlene Foster said the DUP will never sanction any barriers between Northern Ireland and the UK — or any arrangement in which Northern Ireland would have to mirror European regulations. Helpfully, the party’s Brexit spokesman antagonised Mr Varadkar and Ireland’s foreign minister by describing them as a “pair of cowboys”.

The cost of failure would be immense. All sides are worried that a hard border after Brexit would bring back the sectarian violence that dominated Ireland for decades. The 1998 Good Friday Agreement may have brokered peace, but it was EU membership that resolved many other issues. Cross-border economic and regulatory coherence allowed both nations to maintain their identities while tying their destinies together. This is why more than half of Northern Ireland voted to remain in the EU by a margin of 56 per cent to 44 per cent.

There is a painful deadline on the horizon. If the EU does not declare that sufficient progress has been made in a few weeks, the prospect of a “no deal” Brexit rapidly increases. If there is an Irish veto, a full British walkout from talks seems possible.

The best hope for an orderly Brexit is for both sides to keep calm heads on the Irish question, strike a tough form of wording on the border that pleases both Mr Varadkar and the DUP, and hope that something turns up when talks on the future relationship begin. Although many said otherwise, it was never going to be easy.

Explore the series
READ MORE
Podcast: Brexit drives a wedge between the UK and Ireland 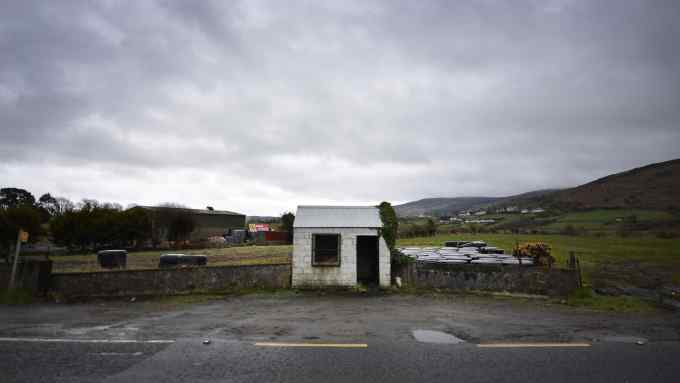 FT writers and contributors analyse the impact of Brexit on the two island nations with a long shared history, and the prospect of a border in the middle of the Irish Sea.