Christian Oliver in Brussels and Peter Campbell in London

The EU is set to issue the biggest cartel fine in its history, punishing Europe’s largest truckmakers over charges that they fixed prices and delayed the introduction of new emission technologies. 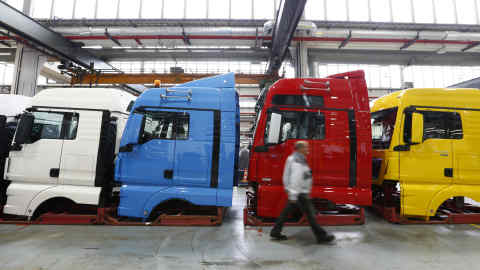 People close to the discussions on penalties say that they are expecting the fine this year, possibly within weeks, unless there is a reversal by the European Commission.

The expected fine easily outstrips the EU’s previous record of €1.4bn for a television and computer monitor tubes cartel in 2012, and dwarfs those imposed over euro and yen interest rate derivative cartels. Ms Vestager has compared the action against the truckmakers to her landmark antitrust showdowns with Google, the US search group, and Gazprom, Russia’s gas export monopoly.

Her probe focuses on the behaviour of the six companies between 1997 and 2011, according to documents seen by the Financial Times. The charges describe several ways in which the manufacturers allegedly colluded on price. Most sensitively after the Volkswagen scandal, the companies are also accused of agreeing the “timing and price increase levels for the introduction of new emission technologies”.

Ms Vestager has stressed that Europe has 600,000 hauliers — mostly small businesses — and argues that any price collusion among truckmakers would have put up prices of everything from food to furniture.

The companies said they were co-operating with the investigation, although one added it might appeal any negative decision.

Only Scania, which is also owned by VW, has not put aside any money. “Scania remains unable to estimate the impact the investigation will have,” the company said its annual report. “It cannot be ruled out that the commission will impose fines on Scania,” it added.

Between them, the six have near total control of the market. The commission’s inspectors raided their offices in January 2011.

Lawyers cautioned that the provisions made by the companies did not mean that the commission would not push for a higher sum. Under EU rules, the companies may face a fine of up to 10 per cent of their global turnover. In the case of the brands involved, that could amount to a maximum of €10.7bn.

One person briefed on the case said the fines being considered were “extremely high” and that two truckmakers had discussed leniency with the commission because the full potential fine could cause serious financial problems.

A fine is often only the initial financial penalty for companies found to be part of a cartel; some hauliers are considering whether to pursue follow-up damages.

“We will be waiting with very keen interest to see what the commission says,” said Jack Semple, director of policy at the Road Haulage Association. “If we see record damages then there will be consequences for that.”

The commission declined to comment on the case, beyond saying that it was a “priority”.