If you asked most people to envisage a whisky drinker, chances are Jessica Anwar would not be it. Thirty-two, married, mother of one, with a chain of fitness studios in Singapore and Hong Kong and a taste for vintage Chanel, the wellness entrepreneur defies the stereotype. Yet she’s the co-owner, along with her 29-year-old brother and her father, of a whisky collection that would make most aficionados tremble.

“It was at a family dinner in Hong Kong, about 10 years ago, that I had my first taste of Port Ellen,” she recalls, “It was a 13th edition and that smokiness, the complexity, attracted me immediately.” Inspired by this cult Islay malt, she began collecting and has since amassed more than 1,000 rare bottles from distilleries including Brora, Lagavulin, Dalwhinnie, Port Ellen and Japan’s sought-after silent distillery Karuizawa.

In line with current trends, she also likes to buy by the cask: “It’s interesting because you get to taste it as it matures and make the decision when to bottle it,” she says. Her casks include a Lagavulin 1991, worth upwards of six figures. She also buys complete sets: Prima & Ultima – a £20,000 collection of eight ultra-rare vintage malts from Diageo stocks – is another recent addition. Sharing those whiskies with friends is “very much part of the experience”, she says – she’s even been known to organise whisky tastings for her fitness clients.

Anwar is just one example of a new generation of millennial drinkers who are transforming the whisky scene, making it younger, more global and more diverse. Natalie Gray, 39, is a former talent acquisition manager at Facebook, now self-employed. She fell in love with whisky while working for a tech company in the Far East. Since her return to the UK, she’s filled her London home with more than 70 whiskies from all over the world: “I’ve got bottles from Amrut in India, Mackmyra in Sweden, the Taiwan distillery Kavalan, whiskies from Japan and Kentucky well as a lot of Scotch,” she says. “At any one time I’ll have five or six open in my house so people can try different things.”

Gray’s favourite whisky bars include La Maison du Whisky in Singapore, and the offbeat whisky shop and bar Milroy’s of Soho: “It has a really eclectic mix of people,” she says. She also name-checks the Old Harkers Arms in Chester. The proliferation of online tastings, particularly since lockdown, has also been great for whisky enthusiasts, she says: “The Milroy’s ones in particular are proper fun.”

Gray scours Twitter and Instagram for news on limited-edition releases. “I follow all my favourite distilleries as well as specialists such as Master of Malt and The Whisky Exchange, but I’m also a sucker for a nice bit of packaging,” she admits. “I bought a Suntory Hibiki 21 Mount Fuji (£799, therarewhiskyshop.com). I also love That Boutique-y Whisky Co’s bottles, which often tell a story.”

Her most treasured investment has been a pair of Yamazaki Sherry Cask 2016s that she picked up in 2017 for £2,000 apiece. Today, they’re worth twice that.

Trey Wade, 28, is a prolific collector of American whiskey – at his home in Charlotte, North Carolina, the bar groans with more than 300 bourbons and ryes. “I love whisky because it’s about economics, chemistry, history,” says the sales executive. “Once I started getting into the subject I dived deep, researching the brands and the history and how these whiskies are made.”

Wade is a member of the executive team of the Black Bourbon Society – a whiskey club, events company and consultancy which boasts more than 20,000 members of colour around the world (one-third of whom are women) – and campaigns for more diverse representation in the whisky industry. “Many companies still don’t recognise the buying power of minorities,” he says. “And as the market gets more saturated, that’s going to make them less competitive.’

Wade rarely bids at auction: “I do not like to pay secondary prices,” he explains. But estate sales, he says, can turn up some real gems. “I once got a 1968 decanter of Old Forester bourbon for 16 bucks – you’d pay $130 online just for the empty decanter.”

Wade might not be a fan of auctions, but growing numbers of millennials are: at the Sotheby’s spirits sale in March, 54 per cent of bidders were under 40. One familiar face on this scene is 24-year-old Douglas Lau, who works as an assistant manager in a statutory body in Hong Kong. A fanatic collector since his father, a wine merchant, took him to Scotland at the age of 18, Lau has amassed over 2,500 whiskies, ranging from an ultra-rare Black Bowmore 1964 2nd edition (£22,500, thewhisky exchange.com) to everyday drams he just drinks for the love of it. When he’s not buying established names, Lau likes to buy “en primeur”. He recently bought a cask of nascent whisky from Islay’s newest distillery Ardnahoe (£11,000): “You don’t know how the whisky will turn out but it’s a fun way to start.”

Lau’s knowledge of the subject is extraordinary. But he insists he’s “no longer the exception. Especially in Asia there are definitely more young people who have the money to buy whisky who also have the access to learning about it – it’s so easy now.” He credits whisky bars including The Swan Song in Singapore, The Elysian Whisky Bar in Fitzroy, Australia and House Welley in Hong Kong for playing a major part in that sea-change.

“Whisky has started to become fashionable with my generation,” he says. “People don’t see it as boring any more.”

How To Spend It
Ultra-aged whiskies: too dram expensive? 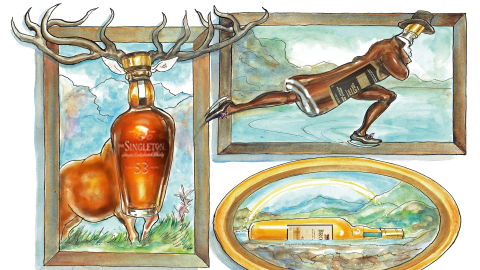