Facebook’s general counsel Colin Stretch has become the second executive in just over a month to leave the social network after the long-running controversy over fake news and data privacy at the company.

Mr Stretch, who joined Facebook in 2010, said his departure was motivated by the difficulty of doing his job from Washington DC, but did not explain the timing, which comes years after he left the company’s California headquarters.

As Facebook’s top lawyer, Mr Stretch was in charge of crucial briefs for Facebook, including its investigation into Russian manipulation of voters through the platform. He was one of a handful of executives who have testified in front of politicians about the issue.

“As Facebook embraces the broader responsibility [founder] Mark [Zuckerberg] has discussed in recent months, I’ve concluded that the company and the legal team need sustained leadership in Menlo Park [in California],” Mr Stretch wrote in a Facebook post. “There is never a ‘right time’ for a transition like this, but the team and the company boast incredible talent and will navigate this well.”

His departure comes just one month after Facebook’s head of policy and communications Elliot Schrage announced he would step down after the company was embroiled in scandal over a huge leak of user data to Cambridge Analytica.

The social network has attempted to draw a line under the issue, but details of the leak have taken a toll on the company’s reputation, forcing it to launch an international ad campaign to convince users that the company does not endorse fake news.

John Gapper
Facebook and Google are arbitraging the data laws 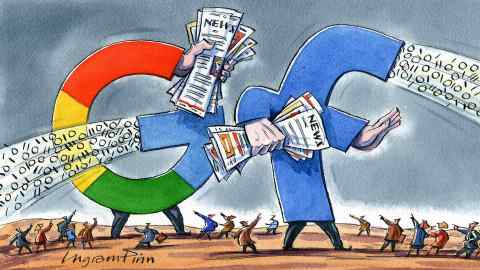 Mr Stretch was brought into Facebook by former general counsel Ted Ullyot and will leave at the end of the year after helping with a transition. Commenting under Mr Stretch’s Facebook post, Mr Zuckerberg thanked him for “wise counsel” and said he and his team had “accomplished so much in protecting the people who use our services”.

Facebook’s legal and regulatory responsibilities have faced intense scrutiny since it emerged that up to 87m users had their data passed to Cambridge Analytica for use in political campaigns without explicit consent.

Following the scandal, the US Federal Trade Commission opened an investigation into privacy practices at Facebook, which signed a consent order with the FTC in 2011 that required it to be clear with users about how their data were being shared with third parties. At the time, Mr Stretch was Facebook’s deputy general counsel.