Luxembourg pulls ahead in race for footloose insurers post Brexit

The UK’s vote last year to leave the EU caused panic in the insurance world.

London has been a centre for specialist insurance for centuries and many global insurersuse the city as a base for their EU operations. Brexit, and the potential loss of passporting rights for the UK, sent the industry’s biggest players scrambling to find an alternative EU home.

Dublin, with its similar legal system and common language, was the early favourite. But in recent months Luxembourg has emerged as the big winner. A host of big names in the industry including AIG, RSA and Hiscox have chosen the country as their new European base.

Several big insurers including Allianz, Axa and Generali, already have a presence there. Swiss Re, one of the world’s biggest reinsurance companies, has been using the country as the base for its EU operations for the past decade.

Rejean Besner, head of Swiss Re’s Luxembourg business, says: “We were looking for a business environment that would be reasonably similar to what we have in Switzerland, which is what Luxembourg has. It is a little more business friendly, a little more pragmatic [than other locations].”

For the newcomers, geography has been a factor in favour of Luxembourg. “It is close to our clients, and it is easy to get to other places from there,” says Suzy Awford, head of regulatory and government affairs at AIG for Europe. Its status as a founding member of the EU has also been an attraction. 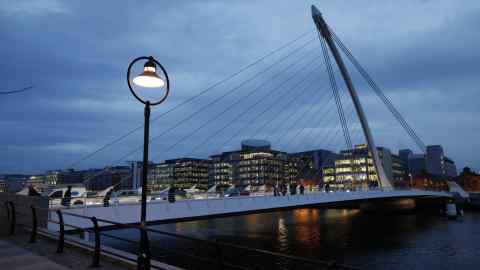 More importantly, insurers and their advisers cite language as a big draw. Although the grand duchy’s official languages are French, German and Luxembourgish, a lot of business is done in English. “The language of regulation is quite critical,” says Bronek Masojada, chief executive of Hiscox. “The language of our European business is English. What mattered was whether they would do business in English. Some of the [other] regulators were quite parochial in terms of language.”

A more controversial issue has been the regulator’s flexibility in terms of what it does or does not require in the new entity. Some insurers have been keen to keep as much as possible in London, and staff the new EU business with only a small number of people. Luxembourg has been more accommodating in this regard, say people in the industry.

Geoff Maddock, a partner at law firm Herbert Smith Freehills, says: “One of the companies we talked to early on said the shortlist was down to Ireland and Luxembourg. The initial message that came from the regulator in Ireland was more demanding than Luxembourg in terms of the number of people and functions it required. Effectively, Luxembourg appeared to be lighter touch.”

That has led to accusations of “regulatory arbitrage”, with other countries suspecting Luxembourg of using light touch regulation to attract business.

Nicolas Mackel, chief executive of Luxembourg for Finance, a development agency, says the EU’s insurance rules limit the extent to which that is possible: “I don’t think there is much scope [for regulatory arbitrage]. You cannot set up a below minimal structure. The decision makers and risk managers have to be in Luxembourg. I don’t see where [the regulator] could offer companies any indulgence.”

What mattered was whether they would do business in English

Nevertheless, those who have chosen Luxembourg do say that the regulator’s business-friendly stance and flexibility has been a major draw.

Mr Masojada says: “There was a willingness to work with us in terms of the way we run our business. Not everyone [in our European business] is based in the same country. When a regulator says ‘everyone has to be in our country’ then it becomes problematic.”

People in the industry admit that the influx of new companies could put a strain on Luxembourg’s insurance infrastructure. The new entities will need boards of directors that include local non-executives. They will also need advice from lawyers and accountants. The regulator will have to handle a larger number of companies.

Mr Mackel says that the country should be able to cope: “There are masses of people here who have been dealing with insurance. If you draw an 80-100km belt around Luxembourg you have a population of 4.5 or 5m people. The talent pool that Luxembourg taps into goes well beyond our borders.”

In the short term, Luxembourg is unlikely to steal London’s crown as the centre of European insurance. The scale of the industry’s London presence would be difficult to replicate.

But Mr Masojada says that could change. “Once they get going, it is easy for these things to build momentum,” he says. “Bermuda has managed to become a reinsurance market to rival London. What builds up is a critical mass of talent, and a regulatory understanding of the business.”