Akio Naito: Seiko watches have to go back to their roots to grow again

By his own estimation, Akio Naito’s ascension to the presidency of Seiko Watch Corporation in April was unusual. “I joined Seiko as an in-house lawyer and I knew virtually nothing about watches,” he says, recalling his arrival at the Japanese company in 1984. “I’m a little bit unique.”

Equally unexpected is Naito’s frank assessment of his inheritance. “Seiko has become a brand of no clear identity,” he says. “‘Everything for everybody’ ended up being ‘everything for nobody’. That has to be changed.”

He has a point. On the brand’s UK website, a steel Seiko 5 Sports priced at £230 sits alongside a diamond-set platinum Grand Seiko Spring Drive 8 Day ‘Mishaka’ at £176,120. Seiko’s international website lists further collections, such as Presage, Astron and Lukia, as brands in their own right. Then there is the Credor family of high-end dress watches, which do not even carry the Seiko name.

Naito, 60, saw the problem first-hand when he transferred to the US in 2016. “When I went to America, brand perception was really low,” he says. “Retailers told me there was a huge price difference and consumers wouldn’t appreciate it.”

The issue was internal, too. “The perception among our employees was that Grand Seiko didn’t have a strong characteristic, like Richard Mille or Hublot,” he says. “It wasn’t eye-catching. Our own people almost gave up promoting the brand.”

Adding to Naito’s challenges is increased competition from Chinese watch brands, which have improved in quality, as well as the stronger yen.

Part of the solution, he says, will be restructuring. Grand Seiko, which watch aficionados call “the Japanese Rolex”, was introduced into the home market in 1960 but it was only launched globally in 2010.

In 2017, the corporation established the brand as an independent company with its own management. The next year, Naito became Grand Seiko’s US chief executive and hired people who felt strongly about the product’s history and quality.

He says the strategy is working, especially now high-end retailers treat Grand Seiko as a different brand. “Last year, in the overseas market, we grew Grand Seiko sales by roughly 30 per cent compared with the previous year.”

International growth is still a priority. “When I went to America, the biggest challenge was to turn around the overseas business and, most importantly, the US — our biggest market outside Japan.”

He says that, in the 1980s, exports accounted for 70 per cent of the business. Today, the proportion has reversed and 58 per cent of the group’s net sales are in its home market of Japan.

A report published in March by Seiko Holdings Group, Seiko Watch’s parent company, shows that exports to the US account for just 7 per cent of net sales, with Europe and Africa a combined 9 per cent.

Last year, watches made up 52 per cent of the group’s net sales of ¥202.6bn, equivalent to $960m. Its other activities include electronics, software, retail and sport timing.

By comparison, Omega, a competitor that is part of Swatch, turned over $1.9bn in 2020, according to Morgan Stanley.

Naito appears the right man to implement international expansion. As well as the US, where he was a Fulbright Scholar in the 1990s, he has lived in Australia. He speaks English fluently and understands western sensibilities.

But the legacy of being all things to all men is still a headache. “If we were a new company, it would be relatively easy to build a brand,” says Naito. “But, because we are 140 years old, we already have some solid foundations in terms of clientele and perception.”

The solution? “We have to go back to our origins and clearly define who we are and communicate that,” he says. “I wouldn’t say this is easy, but if we can achieve that, we will be an awakened brand.”

Positioning Grand Seiko as a luxury brand that “people fall in love with”, and Seiko as a premium brand that offers “good quality and good performance for the cost that you pay” will be critical, he says.

Whether it works will depend on Seiko’s ability to change current trends. The luxury sector is dominated by a few brands — Rolex accounts for 25 per cent of it, according to Morgan Stanley — while sales of mid-market watches, where Seiko’s premium collection sits, are in decline.

In Switzerland, volumes of watches with an export price of under SFr500 ($540), roughly half the retail price, shrank by 7.5m units between 2015 and 2019, equivalent to 27 per cent of all Swiss watch exports. The Apple Watch, which costs from £199 and is believed to sell about 34m units a year, is thought to be responsible for the downturn.

Naito will also need to find a way to bounce back from the pandemic. In Seiko’s most recent set of annual accounts, to the end of March 2021, the watch business was down 22.5 per cent to ¥105bn ($693m). While the Swiss industry has recovered, Seiko’s dependence on the Japanese market has left it exposed to its continuing lockdowns. 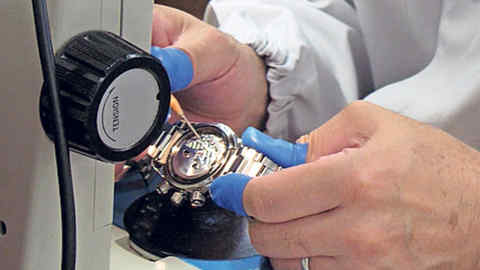 In August, Seiko published its first-quarter results which showed that net sales of watches between April and June were up by 89 per cent over the same period in 2020. But, at ¥27.7bn ($250m), sales were still down on the ¥33.9bn recorded in 2019. “We are steadily recovering but not to the level of 2019,” says Naito. “And it is very difficult for us to predict what will happen in even the coming few months.”

Some brands have raised prices to distinguish themselves from the smartwatch market. Three years ago, Grand Seiko did the same but the move drew criticism from customers and retailers. “Our objective is how we can create something other than function — an emotional value or social value,” Naito says. “If we have to invest into something to create that value, then the price will have to be set accordingly.”

But, in spite of these challenges, Naito believes he has a significant advantage over the competition.

“Our brand has multiple facets and if we can explain these, people will be intrigued.”