Paris AW19 menswear round-up: Suits, sustainability and satins — the makings of a revolution

“Perverse poshness” was the phrase that Clare Waight Keller, artistic director at Givenchy, used to describe her tailoring-heavy AW19 menswear collection. Bar the twee alliteration, it smacked the nail on the head as to what this men’s season was about — an interplay between two distinct, opposing ideas, generally isolated, occasionally crossed over. On the one hand, there were designers dressing men up; on the other, designers dressing men up to mess up. Essentially, the whole season could be split between suits and streetwear (for lack of a better term), and ideas of rebellion and obedience.

In Paris, the idea was inevitably framed by the ongoing protests of the gilets jaunes, which disrupted the well-laid plans of fashion houses and harked back to France’s long tradition of using an item of clothing to underline social unrest (sans-culottes, anyone?). Rick Owens and Rei Kawakubo of Comme des Garçons delivered clothes that distilled angst and uncertainty into cloth. Both made compelling fashion. When those designers talked about darkness, or showed clothes daubed with graffiti like the boarded-up shop windows of the streets around the Arc de Triomphe, you couldn’t help but think of what was going on outside. The Celine show was staged on the exact spot where, in 1793, the aristocracy met the scaffold.

Will the gilets jaunes topple the fashion aristocracy? They’re certainly making an impact: the riots across the country, but intensely in Paris, are set to wipe 0.1 per cent off the world’s sixth-largest GDP, 2.7 per cent of which is generated by luxury goods, which may be hit harder with the loss of business (reportedly down 15-25 per cent over December) and damages. The cost of the November damage to the Dior store on the Champs Élysées stood at €1m — and the windows are still boarded over.

A wider question: how does fashion deal with that — not security-wise, but creatively? Do designers have a duty to reflect their times, or should they offer the opposite — an antidote? This season, people tussled with those notions. Craig Green in London proposed the idea of a man being delicate — a series of plastic smocked looks were inspired by the concept of men made out of glass. “They’re the strongest looks in the show,” commented Green. “But the most fragile.” And today, amid the bluster and huff of toxic masculinity, and violence on the street, fragility feels rebellious. FYI, Green is sourcing recycled plastic to make the looks sustain­able when sold — another undercurrent to these shows where, suddenly, people are asking about the whys and wherefores of sourcing, sustainability and the politics of plastic — a material which, perversely, popped up everywhere.

But is punk gear necessarily rebellious and a suit obedient? That’s an old-fashioned way of thinking. There are entire generations of men who have never worn the latter, and to do so now seems provocative. The number of designers who said they thought it would be interesting to see young men dressed in tailored suits was manifold this season — Silvia Venturini Fendi took the besuited Karl Lagerfeld as her muse; Thom Browne has always dressed his men in twists and turns around the grey two-piece; even Raf Simons, whose work arguably launched the sloganed sweatshirt into the realm of male high fashion in the late 1990s and who has been constantly fixated on teenage transgression, showed polished looks in a grown-up palette of navy, camel and black.

The same was true of Kim Jones’s Dior menswear show, a masterful parade — although the models travelled using a conveyor belt rather than their own two feet, so maybe that phraseology isn’t quite right. When so many other fashion shows make a song and dance — a circus — out of the experience, Jones seemed to be stating with absolute confidence that he didn’t even need his models to move an inch to make an impact. He was right. And those models, draped with streamers of satin, embroidered with artworks, swathed in fur, were a display of luxury that was utterly unparalleled. Yet they still felt absolutely relevant — this was no ivory tower.

Jones’ and Simons’ take on haute couture embedded both with a sense of urgency, immediacy and an undercurrent of rebellion. Both designers had industrial details, of straps and flaps and tactical vests and heavy-soled footwear. They felt tough — part of the trials and tribulations of the outside world, rather than a complete adjunct to it. Yet they both also managed to make you imagine something better. And imagine wanting to wear them. They married dreams with reality in a way that, say, the aforementioned Mr Browne — for all his undoubted talent — could not.

But anyway. Dreams and reality don’t only combine in great swaths of satin (although that was a key fabric of the season). Miuccia Prada was obsessed with the romance of darkness — with celebrating fragility. “It was about my love and understanding and sympathy for humanity,” said she. “Meek people, unhappy people, the rejected.” Then, she shrugged. “But to describe that in fashion — you can’t be too heavy, or else it will become a very heavy political discussion.”

Her message: lighten up! Miuccia Prada referenced the horror of B-movies, as opposed to the horror of the real world, using them as an allegory for the times in which we live. Or, perhaps, she just used them as the source material for a bunch of powerful poppy-printed shirts and knits in lurid colours. It depends what you want to read into it. Do you want your clothes to be a palimpsest of 2019’s socio-economic issues, or to just look nice? The best of this menswear season managed both. 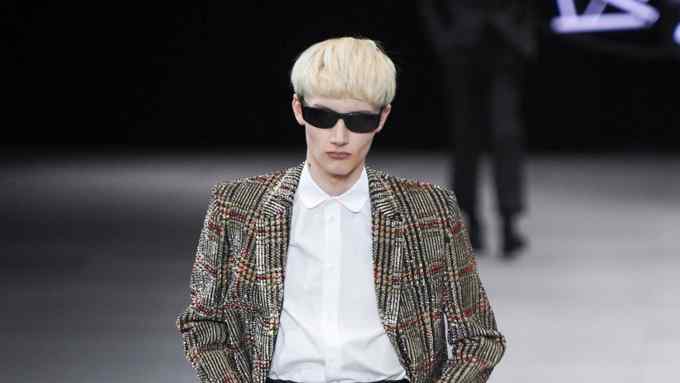