France’s Europe minister has vowed to defend President Emmanuel Macron’s integrationist plans for Europe despite resistance from EU partners and rivals on everything from the eurozone economy to joint defence.

Amélie de Montchalin, the 34-year-old member of parliament and economist from the private sector appointed to the post four months ago, says she has a like-minded ally in Ursula von der Leyen, the European Commission president and former German defence minister who owes her new job to support from Berlin and Paris.

But she admits the French proposals could be thwarted by other EU leaders who are either more cautious or less liberal than Mr Macron, or both.

Her priority list includes dealing with the fallout from Brexit; tackling climate change; more rigorous processing of immigrants; EU defence co-operation and keeping the idea of a budget of the eurozone alive.

“I’m doing in France something very close to many of the things that Ursula von der Leyen has talked about,” said Ms de Montchalin. But she conceded: “There are lots of misunderstandings. Often when France speaks, people think we are more ambitious than we really are . . . France is ambitious, but is not a megalomaniac — this is not about megalomania”.

“When we talk about a eurozone budget, the idea is not to allocate 40 per cent of GDP in spending. When we say we want a social reform, a safety net or fundamental rights, that doesn’t mean that every European country has to have a minimum wage like in France,” she said.

“If you say you’re going to share military intelligence, to learn to share and deploy forces together, then you can get it done. But if you say ‘I want a European army tomorrow’, you can’t.”

Among those standing in her way is Boris Johnson, the new UK prime minister, who says he is prepared to countenance a disruptive no-deal Brexit — an eventuality which would pose a particular risk for France and Britain’s other close neighbours.

Then there is Italy and its populist leaders, who resent what they see as France’s lax attitude to illegal immigrants crossing the Mediterranean into southern Europe. Fiscally conservative northern Europeans are suspicious about France’s push for a common eurozone budget. Angela Merkel in Germany, France’s partner at the heart of the EU, has always been more cautious than Mr Macron about pooling national sovereignty in EU institutions.

Even so, Ms de Montchalin said she expected to make progress on several of the aims Paris shares with Ms von der Leyen, including increased popular participation in the running of the EU and its institutions.

Ms de Montchalin said: “Everything we’ve seen of Euroscepticism, myths, fake news and all that — the stuff which has helped foment Brexit — suggests that Europe is something far away.

“But in fact in daily life — and I’m a mum with three children — there are lots of things that depend on Europe: what they learn at school, healthcare, vaccinations, the safety of medicines, rules on gaming. It’s just that no one talks about it, and when policies are implemented no one makes the connection with real life.” 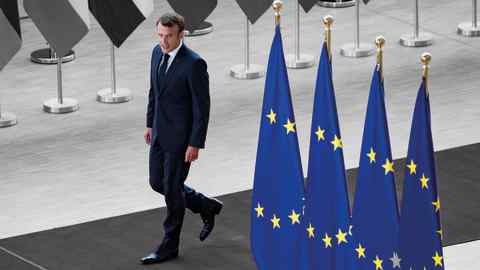 Ms von der Leyen has laid out a programme with many elements dear to Mr Macron and Ms de Montchalin — including, for example, plans for a common EU asylum policy for refugees and some form of minimum wage across the EU — in order to secure the leftwing and liberal votes in the European Parliament she needed to secure her appointment.

Questioned about Germany’s resistance to the idea of a substantial eurozone budget, Ms de Montchalin noted that Ms von der Leyen had backed a European “budgetary solidarity” mechanism to deal collectively with asymmetric economic shocks leading to high unemployment in some countries and not in others. “I don’t know if that’s German or not.” Asked then if Ms von der Leyen had said this simply to win support in the European parliament, Ms de Montchalin replied: “Yes, but she said it.”

Apart from Brexit, one of the hottest topics in the EU in the months ahead will be immigration. Mr Macron has one eye on populist and nationalist governments in eastern and southern Europe, and another on the far-right French leader Marine Le Pen — whose party narrowly beat Mr Macron’s in the European elections in May.

France has sought to limit illegal immigration by tightening the EU’s external border controls, while trying — so far with limited success — to arrange a way of sharing the burden of accepting migrants between EU countries, and also accelerating the processing of asylum applications to ensure that genuine refugees find a new home.

“We cannot let only Spain, Italy, Malta and Cyprus have to deal with migration,” Ms de Montchalin said. “If we do so we create . . . a populist movement which because [migration] is not managed and organised with solidarity and responsibility, has a free way to have very dangerous ideas.”

Ms de Montchalin is also eager to simplify the EU’s institutions and their sometimes abstruse decision-making procedures and make them more accessible to the union’s 500m citizens. She is backing Ms von der Leyen’s proposal for a two-year “Conference on the Future of Europe” starting in 2020.

“In order to make decisions we need to change our internal decision-making processes, we need leadership and courage,” she said. “We need to be able to find alliances that remove the biggest risk I see in Europe — a Europe of blocs, of east versus west, of north versus south, the small versus the big — that’s the worst.”