Everyone has a story in this subtly written, yet grand, sweep through German-run colonial times

We’ll send you a myFT Daily Digest email rounding up the latest Fiction news every morning.

From the first assured pages of Afterlives, a book of quiet beauty and tragedy, it is clear one is in the hands of a master storyteller. Zanzibar-born Abdulrazak Gurnah, who has written nine novels, including the Booker Prize-shortlisted Paradise (1994), leads us by the hand into the world of German-occupied east Africa, before Germany lost its territories after defeat in the first world war.

It is a time and a place we have mostly forgotten ever existed. Yet, without the slightest trace of exoticism — just a story of lives lived against the backdrop of larger events — Gurnah makes us care about the fate of his characters, and by extension the physical and psychological space they occupy.

Afterlives tells the story of four main characters whose lives intersect with each other in love and kinship, and which are moulded by great forces beyond their control, principally the colonial tussle over the land they inhabit.

The story, which moves between a provincial town in what is now Tanzania and the exercise grounds and battlefields of the German schutztruppe (the German colonial army), is told with an understated economy. Gurnah’s phrasing has a languorous, soothing quality, even if the events described are anything but. Only in the novel’s final, shocking pages does the pace quicken and is the true meaning of the story — or at least one aspect of its meaning — revealed.

In addition to the main characters, there are several secondary ones, including Germans who play decisive roles in the narrative. Not one is a caricature. All are drawn with a few deft strokes of the pen.

Khalifa, the first main protagonist to be introduced, is the son of an African “countrywoman” and a Gujarati book-keeper. At first the reader might imagine (at least, this one did) that the novel is Khalifa’s story. But although he forms its moral backbone — disguised by his general grumpiness — he fades from foreground to background.

So too does Ilyas, who is stolen from his parents by the schutztruppe as a child and returns to his village to find his parents gone and his sister, Afiya, adopted by a couple who treat her as a slave. Ilyas rescues her and brings her to town before, for reasons never truly explained, he volunteers again to fight for the schutztruppe in their impending clash with the British.

Ilyas disappears for much of the book, to be replaced by the novel’s main character, Hamza, who runs away to join the schutztruppe after being sold by his parents. The fact that Afterlives takes a while to settle on its centre of gravity fits an important theme. Everyone has a story, even if they seem peripheral to the grander sweep.

A German pastor and his wife save Hamza from life-threatening injury, the result of a sword-slash from a German soldier. But the pastor views the landscape where these events unfold as one where “nothing of any importance has ever happened”. It is the book’s mission to rescue this place from such disdain.

The violence and racism on which German power is grounded passes mostly without comment. Africans, like Hamza and Ilyas, who fight Germany’s battles have been bludgeoned, tricked or conditioned. “I am here to serve the schutztruppe and the Kaiser,” Hamza says when quizzed by a barking Oberleutnant.

Almost everything, from Hamza’s lovely courtship of Afiya to the quiet progress of the town merchant to wealthy magnate, comes as naturally as a flowing river.

Gurnah, born in present-day Tanzania in 1948 and now living in Britain, has written a story against the background of an Africa where imperial borders were still being fought over. He brings a freshness to that story. But for the most part, the big events — though they shape the characters’ lives — are not the heart of a narrative in which ordinary people take centre stage.

There is an east African proverb that when elephants fight it is the grass that suffers. Gurnah is far too subtle a writer to resort to such cliché. But this is a story of the grass. 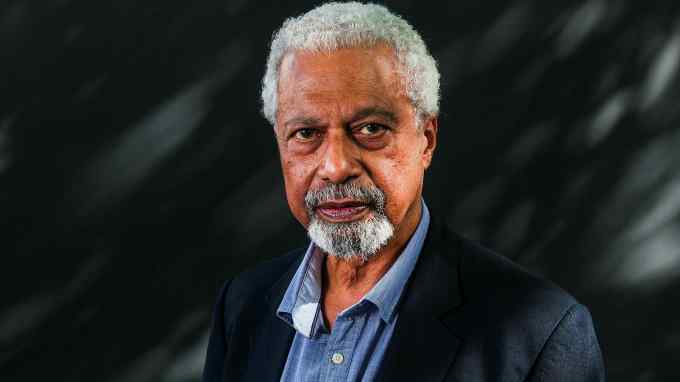