If the ancient Silk Road developed to enable trade in fine cloths and spices, the new one will transport computer equipment and frozen poultry.

In 2011, Hewlett-Packard started sending laptops and LCD screens from Chongqing in south-west China to Duisburg in Germany by train rather than boat, pioneering a renaissance in overland transport across central Asia.

To bypass Russia, US suppliers of chicken to Kazakhstan have begun shipping via the Black Sea and onward through Georgia, Azerbaijan and across the Caspian Sea to Kazakhstan, says Sanzhar Yelyubayev, chief executive of KTZ Express, the logistics subsidiary of Kazakhstan’s national rail company. “We are in the middle of practically all routes which come and go to China and Europe,” he says.

Across the region, overland trade routes, which through a combination of poor infrastructure and political problems have been neglected for centuries, are opening up.

In February, cargo trains began running from China to Iran via Kazakhstan and Turkmenistan. Late last year, DHL started shipping goods from China to Turkey across the Caspian and Black Seas.

The new transit routes represent a “broadening” of China’s vision of a new Silk Road, says Raffaello Pantucci, a specialist on the region at the Royal United Services Institute (Rusi), a British defence and security think-tank. “It isn’t just a train set that starts in Urumqi, goes to Kazakhstan and Russia and ends up in Europe. There is evidence that the route is broadening out.”

The nascent trade routes are the result of billions of dollars of investment in rail, road and port infrastructure by China, other governments in the region and international financial institutions.

They are also a function of political shifts. China’s new Silk Road — what it calls the “One Belt, One Road” strategy of ports, pipelines and railways across central and Southeast Asia — is a prime feature of its foreign policy. The Russian-led Eurasian Customs Union — and, since 2015, the Eurasian Economic Union — have reduced bureaucracy at borders from central Asia to Belarus.

The relaxation of western sanctions against Iran is also having far-reaching effects.

It is difficult to miss the symbolism of the emerging trade flows along the old silk trade routes, but the new Silk Road remains at an experimental stage.

Mr Yelyubayev predicts that just 50 trains will ply the route from China to Iran this year and a further 50 train loads of goods will make the journey across the Caspian.

Most overland trade from China to Europe uses the “northern route” through Kazakhstan, Russia and Belarus. More than 1,250 trains made this journey last year, carrying 47,400 containers — a 40-fold increase from 2011.

The route is attractive to electronics companies like HP for which the shorter transit time compared with shipping by sea is worth paying for. The journey from China to Europe currently takes 13-16 days, compared with a month or more by sea.

The cost of transporting one container by rail to Europe is some $8,000-$10,000. That is more than twice the cost of shipping by sea but it can make economic sense for some products. Mr Yelyubayev says KTZ Express is working with Toyota, which dispatches cars and parts destined for the Russian and central Asian markets from Japan via Finland.

Darryl Hadaway, a former head of Deloitte in the region who is starting a logistics business focused on Kazakhstan, estimates that if the contents of a container are worth more than $1m-$1.5m, the additional cost of rail transportation can be offset by the reduced cost of financing inventory.

“We are cheaper than air but faster than sea,” says Mr Yelyubayev. Kazakhstan aims to boost transit trade to 1.7m containers by 2020 — a 35-fold increase over 2015 — in an attempt to capture 10 per cent of the $600bn trade between Europe and China. 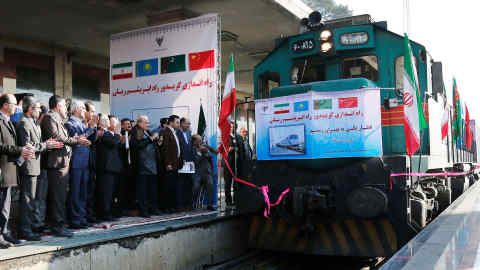 Despite the lofty aspirations, the economic viability of the new Silk Road remains unproven. Industry experts say that all rail transport heading west from China is heavily subsidised by local and regional governments, eager to do their part for the new Silk Road. One industry executive estimates that such subsidies cover half of the cost of transport.

Central to improving the economics will be increasing the use of the route to carry goods to, as well as from, China, in order to avoid trains and containers returning from Europe empty.

“We know that at some point subsidies will go away,” says Mr Yelyubayev, pointing to speculation that such support will be withdrawn in 2019-2020. “We are ready for this.”

“It’s very difficult to see necessarily how it’s going to work at the moment,” says Mr Pantucci at Rusi.

“I would argue the Chinese have a long-term vision at play here. You open the route up and then the process of making it economically viable is something you work on a bit down the line.”

China’s “One Belt, One Road” project aims to make central Asia more connected to the world, yet even before the initiative was formally announced China had helped to redraw the energy map of the region. It had built an oil pipeline from Kazakhstan, a gas pipeline that allowed Turkmenistan to break its dependence on dealings with Russia and another pipeline that has increased the flow of Russian oil to China.

Chinese companies have funded and built roads, bridges and tunnels across the region. A ribbon of fresh projects, such as the Khorgos “dry port” on the Kazakh-Chinese border and a railway link connecting Kazakhstan with Iran, is helping increase trade across central Asia.

China is not the only investor in central Asian connectivity. Multilateral financial institutions, such as the Asian Development Bank, the European Bank for Reconstruction and Development and the World Bank have long been investing in the region’s infrastructure. The Kazakh government has its own $9bn stimulus plan, directing money from its sovereign wealth fund to infrastructure investment. Other countries, including Turkey, the US, and the EU have also made improving Eurasian connectivity a part of their foreign policy.

1) A China-led consortium last year won a $375m contract to build a 770km high-speed railway line between Moscow and Kazan, writes James Kynge. Total investment in the project — set to cut journey time between the cities from 12 hours to 3.5 hours — is some $16.7bn.

2) In May last year, Kazakhstan’s President Nursultan Nazarbayev announced a plan to build — with China — a railway from Khorgos on the Chinese border to the Caspian Sea port of Aktau. The scheme dovetails with a $2.7bn Kazakh project to modernise its locomotives and freight and passenger cars and repair 450 miles of rail.

3) The 3,666km Central Asia-China gas pipeline predated the new Silk Road but forms the backbone of infrastructure connections between Turkmenistan and China. Chinese-built, it runs from the Turkmenistan/Uzbekistan border to Jingbian in China and cost $7.3bn.

4) China signed agreements with Uzbekistan, Tajikistan and Kyrgyzstan to build a fourth line of the central Asia-China gas pipeline in September 2013. Line D is expected to raise Turkmenistan’s gas export capacity to China from 55bn cu m per year to 85bn cu m.

5) Kyrgyzstan’s prime minister Temir Sariev said in December that the construction of the delayed Kyrgyz leg of the China-Kyrgyzstan-Uzbekistan railway would start this year. In September, Uzbekistan said it had finished 104km of the 129km Uzbek stretch of the railway.

6) Khorgos Gateway, a dry port on the China-Kazakh border that is seen as a key cargo hub on the new Silk Road, began operations in August. China’s Jiangsu province has agreed to invest more than $600m over five years to build logistics and industrial zones around Khorgos.