Chris Giles in London and Jim Brunsden in Brussels

Brussels has laid out its reasons for rejecting high-profile British proposals on the Irish border, an issue that could delay or impede final agreement in the Brexit negotiations.

On the day that Michel Barnier, the EU’s chief negotiator, met David Davis, UK Brexit secretary, for talks on the subject in Brussels, the European Commission published slides that set out the full range of its concerns about London’s approach.

In an “assessment” published at the end of the slides on Monday, the commission concluded that the British proposals leave “key questions unanswered,” do “not cover regulatory controls, leading to a hard border” and are “time-limited only”.

The stance is a blow for Theresa May ahead of an EU summit on June 28-29 that was supposed to make progress on the Irish border as a prelude to a broader deal on the withdrawal treaty. The border question — a vital piece of unfinished business in the Brexit talks — now looks unlikely to be solved until October, when the entire negotiations are supposed to be completed, so putting the timetable at risk.

The issue at hand is the so-called “backstop”, a provision intended to ensure an open Irish border if no better solution can be found.

Under the UK proposals, published last week, Britain would agree to apply EU customs tariffs to avoid the need for checks at the border with the Republic of Ireland. Mrs May’s government has added that its expectation is that the backstop plan is unlikely to be needed after 2021 because new permanent arrangements would be in place.

The plans are a bid to replace the EU’s blueprint for the backstop arrangement, which would in effect leave Northern Ireland in the union’s customs union and single market, with the rest of the UK outside — an outcome London regards as unacceptable.

Monday’s commission slides fleshed out a list of issues raised last week by Mr Barnier about the UK plan. 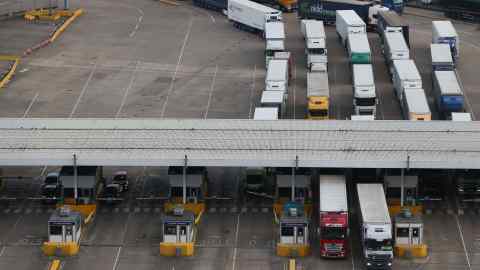 Mr Barnier said the British proposals did not amount to a backstop solution for avoiding border checks in Ireland, not least because they did not address the critical issue of compliance with EU single market rules.

He also warned that the proposals raised a host of complex legal questions, particularly because Britain wants to continue reaping the benefits of European trade deals.

Brussels also insists that the backstop, which is supposed to ensure an open border in Ireland if no better solution can be found, must have no end-date attached.

Its assessment means that, in the EU’s view, its proposal remains the only workable backstop plan.

The EU plan provides a “timely and workable solution” and “covers all necessary customs and regulatory controls to avoid a hard border,” according to the slides.

Video: Why Ireland could shape the Brexit deal - or doom it

The commission added that detail was insufficient in the British proposal on whether the UK would remain part of the customs union or would create a new customs territory comprising the EU27 and UK, leaving “uncertainty on the scope of EU trade policy applicable to the UK”.

Such a distinction, Brussels said, had important implications for customs duties collected, regulatory controls and governance arrangements including the applicability of European Court of Justice rulings in Britain.

The slides also take aim at the UK’s desire to “continue to help develop the rules that govern trade and customs policy”.

“How can a third country continue shaping and applying EU rules and carry out controls without proper EU supervision and enforcement?” the commission document asks.

On value added tax, it accused Britain of advocating a “piecemeal application of EU VAT and excise rules” which would bring “serious risks of fraud on a significant resource for member states”.

Get alerts on Michel Barnier when a new story is published