The city of Paris, Texas, was exactly the kind of place Donald Trump had in mind when he pushed for a speedy reopening of the US economy.

Until late last month, there had been no coronavirus deaths and only a handful of cases among Paris’s roughly 25,000 residents, all of them linked to out-of-state travel. Despite the low case count, businesses had been forced to close, while the trail of tourists who once stopped to have their picture taken alongside the city’s scale model of the Eiffel Tower had dried up.

Then, at the end of April, a suspected outbreak ripped through one of the city’s nursing homes, prompting local officials to embark on a scramble to secure sorely needed tests.

“Testing is in extremely short supply across the entire state, and across the entire country,” said Dr Steve Clifford, a local physician and the city’s mayor. “You might order 100 and you’ll get a fraction. There just aren’t enough of them.”

The outbreak in Paris comes as many US states push to reopen their economies despite patchy access to testing, raising the prospect of a fresh bout of outbreaks that could result in a spike in deaths, new lockdowns, or both.

Texas governor Greg Abbott is pressing ahead with one of the most aggressive reopening programmes in the country. On Friday, barbershops, beauty parlours and tanning salons were allowed to open their doors to customers.

Upon learning of the suspected nursing home outbreak, Dr Clifford joined a hastily arranged conference call with Texas state health officials and after much pleading managed to secure 400 tests. “When they realised the scale of the problem, the health department got them to us,” he said.

The results came back and confirmed Dr Clifford’s fears. About 80 per cent of residents and staff tested positive for the virus. “Every single person [at the nursing home] is likely to turn out to be positive,” he added.

By the time the results were returned, it was too late. The nursing home’s employees had been shopping in local grocery stores, unwittingly spreading the virus among other residents in Lamar County.

Now there are at least 85 cases in Lamar County, 52 of which have been linked to the nursing home outbreak, while three people have died. Dr Clifford expects more to come.

“It will reach the point where we have significant community spread, and that’s probably where we’re heading right now,” said Dr Clifford.

Despite attempts to trace contact between nursing home staff and other residents, Dr Clifford said: “I don’t think anybody knows where the original source was, we have no idea.”

The situation in Paris is replicated in cities and states across the US, with local officials reporting difficulty securing enough tests even as many of them prepare to reopen their economies.

In North Dakota, a mass testing event at an indoor athletics stadium was cancelled last week because the state could not secure enough supplies.

“We’re competing against all 50 states, FEMA [the Federal Emergency Management Agency], and other federal agencies,” Doug Burgum, the state’s governor, said at a press conference.

The scramble to secure tests comes despite the White House’s insistence that there is enough capacity. “We have so much testing,” Mr Trump said last week before embarking on a trip to Arizona. “I don’t think you need that kind of testing, that much testing . . . but we have the greatest testing in the world, and we have the most testing.”

In reality, a worldwide dash to secure testing supplies is complicated further in the US by fragmented government and a Balkanised private healthcare system. In the last week of April, 1.7m Americans were tested for the virus, well below the number needed to support a safer economic reopening. The Rockefeller Foundation estimates that the US needs to conduct 30m weekly tests.

When officials talk of securing test “kits” it is something of a misnomer, suggesting an all-in-one box with everything needed to confirm someone has the virus. In fact, testing relies on a fragile supply chain that is under huge strain.

North Dakota’s mass testing event was cancelled because the state did not have enough “deep well plates” that run through high-speed machines to generate results, resulting in a backlog of thousands of samples.

The shortages have resulted in some creative thinking to help plug the gaps, although it is not enough to fill the deficit.

In Urbana, Illinois, Chris Brooke, a research scientist, has turned his lab into an ad hoc factory to supply local hospitals. The lab is churning out between 35,000 and 40,000 vials of viral transmission media, a kind of storage device that maintains the integrity of virus particles collected by swab until they are tested.

Scientists warn that the bottom-up approach to testing adopted in the US, where most responsibility is devolved to the states and private providers, cannot be scaled into the kind of programme needed to accompany an economic reopening. At the moment, all 50 states are competing with each other and the federal government to buy supplies, exacerbating existing shortages.

One government scientist said it would have been better if the federal government had taken the lead in buying commercially available supplies before distributing them to the states, while also using the Defence Production Act to compel factories to produce components that are experiencing shortages.

He said: “It’s a disaster — it should not have been a problem for the US with competent leadership and the buying might of the federal government, especially when we had a head start in learning about the severity [of the disease].”

Dr Jonathan Quick of the Rockefeller Foundation said: “Countries that have done well are Germany and others, where they’ve used national group procurement so they become a strong buyer from companies selling a scarce resource.”

Still, Dr Clifford describes himself as a reluctant supporter of the reopening of Texas towns such as Paris.

“If you could be here and see what it’s doing to my town, you’d see that our businesses are going to go bankrupt, several of our restaurants will never open again. And, the longer this goes on, the more [the local economy] will go away,” he said.

He added: “There is danger in not reopening too: no jobs, poverty, a lack of money. People will lose their homes, their businesses, their cars. They will lose everything.” 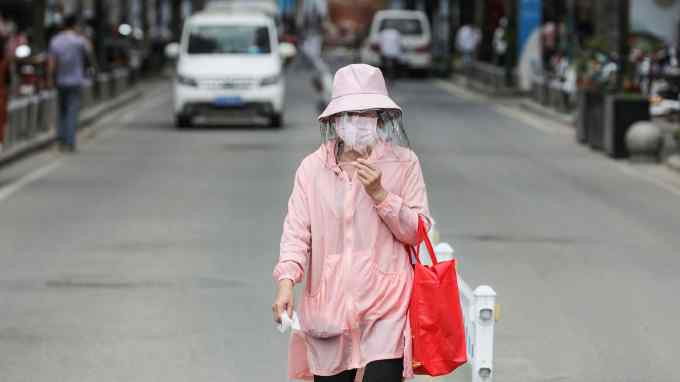