Designer Hedi Slimane continues his journey back to the Seventies

For the most hardcore Phoebe Philo acolytes, the pain of seeing their thinking woman’s brand taken over by the commercially savvy hitmaker Hedi Slimane in 2018 may still be raw. But fashion moves quickly, and whether you like it or not, Slimane has successfully taken aesthetic ownership of the French label.

After a bit of a false start with an overtly sexy and short debut collection, he changed tack towards a more bourgeois, grown-up, 1970s ouvré he has since continued. First, with a collection of culottes, bomber jackets and boots, and then for spring/summer 2020, flared jeans, denim skirts and boho blouses. While he may not have reinvented the creative wheel, he helped bring the 1970s bourgeois look back to the trend table.

With actress Isabelle Huppert and cult French singer Jane Birkin in the front row, the show was staged in a specially built venue, something that sets the biggest brands at Paris Fashion Week apart. As the monumental Saint Laurent and Dior sets were reduced to their metal skeletons after their shows, it was striking what a major investment they are.

As the show began at Celine, a black curtain was whisked away at the end of the stage to reveal a moving, and slightly menacing, flashing metal sculpture which resembled a malfunctioning fairground ride. It soon reassembled itself to form a giant illuminated Celine logo. The air was redolent with Reptile, one of a new range of £175 unisex scents that Celine launched late last year, which was worn by the models.

And then we were off, on a late 1960s and 1970s “I’m with the band” tip, via clothes that to an English person looked straight out of the Kings Road in that era, but must have had their equivalent French location, perhaps St Germain. There were also numerous indie musicians in the audience, including members of Phoenix and The Libertines.

It was a unisex collection, intended to be interchangeable, and revolving around skinny flares, heeled boots and little jackets or wool coats. For women, culotte suits came in check wool, or velvet, worn with ruffled silk blouses, 1970s dresses appeared in brown with white polka dots and gold lamé, some with pussy bows, and a pinstripe blazer was worn with a ruffled cream blouse and flared jeans. For outerwear there were capes in check wool and suede, as well as neat princess coats. Eveningwear included beaded, waisted dresses with billowing sleeves, a leopard print kaftan and a really lovely black velvet column dress with ornate, bejewelled gold sleeves that would suit both an ingénue or her mum.

And on the men, the story was similar: flared jeans and velvet trousers, wool trenches, a patchwork sheepskin coat and little bombers in leather or velvet. For evening, there were glittering tuxedos and beaded velvet, collarless jackets. Handbags too — some sleek and retro, others circular, some with chain handles — carried by both men and women.

Whisper it, but much of the collection suggested a haul from an upscale Parisian flea market. Is it new and innovative? Perhaps not. Do I want to wear all of it anyway, including the men’s? Hell, yes. And there, in a nutshell, is the Hedi effect. 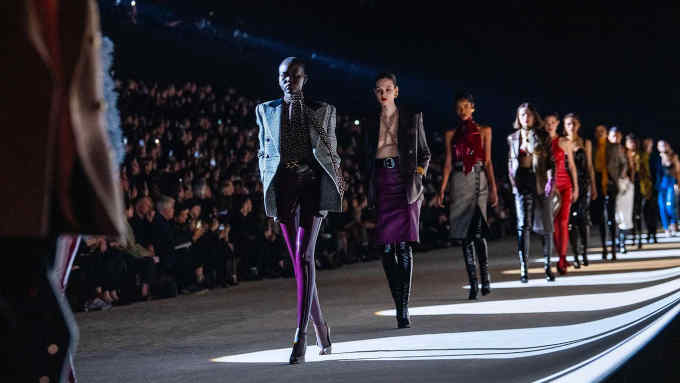