Sales weren’t thick and fast at the satellite fair’s 2019 edition, but dealers did well at the lower price range

Korean artist Minja Gu is chopping octopus and frying noodles in the middle of an art fair every day until Sunday. Her mission at Art Central — the only major satellite fair to Art Basel Hong Kong, which opened this week — is to replicate the bowl pictured on the front of an instant noodle packet, ubiquitous fare in the city she is visiting for the first time. The fast-food version takes two minutes to make; Minja’s more appetising meal takes about two hours. “My work deals with time,” she tells me just before she starts cooking in the fair’s tent. “I wonder, maybe: am I too slow for today’s pressured society?”

Such performances, brought to the fair by Sydney’s 4A Centre for Contemporary Asian Art, and the larger-scale projects commissioned by the fair provide the event’s most arresting art. Hong Kong artist Angela Yuen has meticulously pieced together plastic toys on a turntable that project her city’s shimmering skyline around a booth. The new work, “City Rhapsody — Project Roseate” at the Contemporary by Angela Li gallery, harks back to the 1950s and 1960s, when, Yuen says, Hong Kong “felt more like a big family”. Now, she finds, “people live alone in buildings and don’t know their neighbours.”

Another interactive piece here has a similarly strong sense of local political commentary: “New Territories Old Territories” (2019) by the China-born Hong Kong artist Ko Siu Lan. It is one of the most daring works I’ve ever seen exhibited in the city. Three towering posts, inspired by Tibetan cylindrical prayer wheels, address the complicated relationship between the Special Administrative Region and Mainland China. Visitors are invited to turn them to make sentences whose limited variables include “Hong Kong isn’t China”, “Hong Kong is China” and vice versa. Shuyin Yang, director of Art Central, is aware of the potential sensitivities around the work. “I gave some Hong Kong government tours yesterday and didn’t dwell on this piece,” she admits.

Gallerists who are exhibiting the work of just one artist on their booth, as well as those who are showing installation pieces, also stand out among the fair’s 107 contemporary and Modern art exhibitors. Newcomer Premilla Baid, director of Gallery Sumukha and the fair’s first exhibitor from Bangalore, has filled her stand with chicken coops and golden eggs, part of an installation by the New Delhi artist Paresh Maity, complete with a recording of cackling hens (“Birth of the Golden Egg”, 2018, about $290,000). It’s a brave decision to bring only one artist to a fair — gallerists run a higher risk of not hitting the spot — but, Baid says, “I’m trying to get the attention of curators and museums,” adding that Maity’s work proved a talking point with visitors from Shanghai’s Museum of Contemporary Art. She is also targeting Hong Kong’s many Indian-diaspora residents whom, Yang says, the fair makes an effort to attract.

In general, the works on the walls are a mixed bag at Art Central, which caters to a local crowd with accessible art and prices. Sales were reported at the lower price levels, including works by Australian artist David Middlebrook, who references traditional Chinese ink paintings, for between AUS$2,000 and AUS$3,000 (Art Atrium gallery). Munich dealer Andreas Binder sold two floral photographs by the Brazilian Luzia Simons to a Hong Kong corporate collection for $16,000 each. Higher-priced sales were also reported, though activity was slower at the six-figure level. Seoul’s Gallery Hyundai sold Ivan Navarro’s 2016 neon-drum piece at the fair’s entrance for about $125,000 and Sundaram Tagore sold Hiroshi Senju’s acrylic on Japanese mulberry paper painting “At World’s End #1” (2017) for $375,000, the highest reported sale from the fair so far.

Sales weren’t thick and fast, but dealers seem happy to roll-the-dice at Art Central. Here, the dealers say, booth prices are about half of those at Art Basel along the bay. Midway through the fair another newcomer, Ayo Adeyinka, director of London’s Tafeta gallery and Art Central’s first specialist in African art, had yet to make a sale. He has brought works by the Nigerian artists Babajide Olatunji (charcoals for $12,000; large painting for $85,000) and Niyi Olagunju (drawings $1,500, sculpture for $40,000). “China does a lot of business with Africa though there isn’t much cultural engagement or knowledge of African art,” Adeyinka said. “But I’m blind as well; I’ve never shown here before. Let’s see how it goes.” 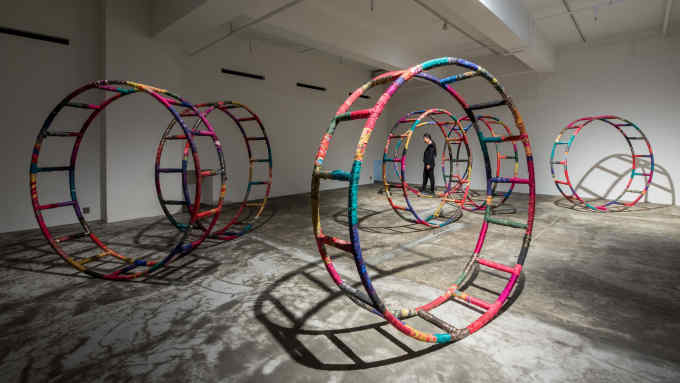