Peter Altmaier, Germany’s economy minister, has called for the creation of a state investment fund that would step in to pre-empt foreign takeovers of big German companies, the latest sign of growing protectionist sentiment in Berlin.

The proposal is part of a new industrial strategy designed to create “national and European champions” that are better able to compete with tech giants in the US and Asia, and to build up German competence in critical new technologies such as artificial intelligence and electric vehicles.

The new “dirigiste” industrial policy has raised eyebrows in Berlin, even among Mr Altmaier’s fellow Christian Democrats, some of whom have accused him of betraying the party’s free-market principles. Business leaders have also lambasted the minister’s plans, saying they will lead to excessive state interference in the economy.

But the move comes just weeks after the BDI business lobby called for a much tougher approach to China, saying Germany’s open model was increasingly in competition with China’s “state-dominated economy” and needed to protect itself more effectively from Chinese companies.

Under Mr Altmaier’s proposal, the state could intervene to protect companies whose “technology is crucial to Germany’s future competitiveness” from foreign takeovers. It would do this by taking temporary ownership of the targeted company — but only if no other private “white knight” could be found to stop it being sold off abroad.

Mr Altmaier said he was motivated by the 2016 sale of Kuka, Germany’s leading robotics group, to Chinese appliance-maker Midea, a deal which fuelled fears that Germany’s most advanced industrial technologies could end up in Chinese hands.

German suspicions over China’s true motives have grown since the emergence of Made in China 2025, President Xi Jinping’s 10-year plan to transform his country into a high-tech power dominant in 10 advanced industries.

That has led to law changes which raised barriers for Chinese companies seeking to acquire German assets. In December, Germany lowered its threshold for screening foreign takeovers to protect critical infrastructure from Chinese groups: in future, Berlin can block all deals in sensitive industries such as defence and energy in which a non-EU company acquires more than 10 per cent of a German business.

Germany is increasingly intervening to stop Chinese investments. In July, Berlin told state development bank KfW to take a 20 per cent stake in 50Hertz, a high-voltage power network operator, to pre-empt the stake’s acquisition by a Chinese state investor.

Mr Altmaier complained that Germany had not seen the emergence of any major domestic tech giant in recent years. “Instead of that, former market leaders like AEG or Grundig long ago have lost their status,” he said.

But on Tuesday his proposals received short shrift from business. “National champions are formed through competition and not through state intervention,” said Marija Kolak, head of the BVR, the Federal Association of German co-operative banks.

The liberal, business-friendly Free Democratic party was also critical. Michael Theurer, a senior FDP MP, said the CDU “in sheer panic over the rise of China is saying goodbye to the market economy”.

Speaking as Brussels prepared to block the merger between German and French train manufacturers Siemens and Alstom, Mr Altmaier also called for changes to EU competition rules to make such big M&A deals easier. France and Germany have argued that a merged Siemens and Alstom would have been better able to compete with state-backed foreign rivals, particularly from China.

Mr Altmaier said EU competition rules should better reflect the competitive landscape in global markets, rather than just national and regional ones. “Are there not industries such as civil aviation, or railways, or plant construction, or banks, where the global market should be the reference market?” he asked. He said European companies in such sectors could only compete on an equal footing with rivals from China and the US “if you allow mergers, so the companies we have in these industries can achieve the [necessary] scale”. 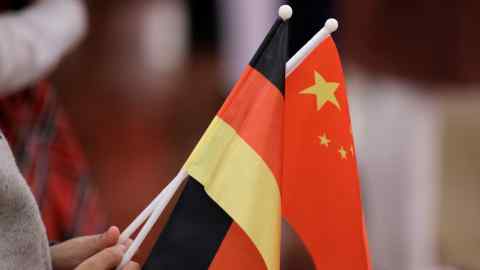 Mr Altmaier said it was in Germany’s “national political and economic interest” to ensure the survival of certain German “champions”, including the troubled Deutsche Bank.

The industrial strategy presented on Tuesday also included a goal to increase the share of industry in Germany’s gross value added from 23 per cent to 25 per cent by 2030.

This would be achieved through aggressive state support for battery-cell production — one of Mr Altmaier’s favourite hobby horses — and artificial intelligence.

The policy paper said Germany’s strong economy was “not God given — it is constantly being challenged by international competition, as well as the arbitrary interventions of other states and companies”.

It said Germany’s weakness in future technologies was becoming a “direct risk” for the future long-term success in areas that Germany traditionally excelled in, such as cars. The auto industry, in particular, could suffer if it failed to keep up with new advances in electric and self-driving vehicles.

Mr Altmaier cited the example of consumer electronics, a sector that Germany dominated until the 1970s, when it was eclipsed by companies in Japan and South Korea.

The minister said he wanted to ensure that Germany “changes from being a country that just passively observes and endures developments that are well under way in the US and Japan to being an active participant in these processes”.