The chancellor’s support package is welcome, but many self employed people are excluded
Claer Barrett

Five million self-employed people in Britain have been desperately waiting for details of a financial support package to ease the “income shock” triggered by the coronavirus shutdown.

When the chancellor announced support for furloughed staff on company payrolls last week, there were fears that self-employed workers had been forgotten. Thursday’s announcement provided relief — but those who qualify are dismayed that they will have to wait until “early June” for any money to arrive.

This is going to be horribly challenging for many — around one in three self-employed people earn less than £10,000 a year — but for a while it looked like they might not get anything other than a long wait to register for universal credit.

While we should applaud the chancellor and the Treasury for attempting to work out a solution, we must also consider what more could be done for those who fall between the cracks of the various initiatives.

The difficulty of designing a scheme to help the self-employed highlights the huge range of jobs, incomes and working arrangements among this 15 per cent slice of the UK workforce.

The chancellor’s scheme is very much designed to help those with the simplest tax affairs — sole traders who submit a tax return via self-assessment.

Although they’ll have to hang on until June, they will eventually receive a taxable grant equivalent to 80 per cent of three months’ trading profit, capped at £2,500 a month and backdated in a single payment that is calculated using information from their last three tax returns.

As long as they are registered and receive most of their income from self-employment, have filed a return for the 2018-19 tax year (or get one in sharpish) and have average trading profits of less than £50,000 a year, they will eventually get some money. Bravo.

If your average trading profit over three years is a penny higher than £50,000, you won’t get any help

The lobbying to speed up this process has already begun. Yet as the rules of the scheme are fleshed out, it is obvious that many self-employed people will be excluded — and that the chancellor’s admission that he can’t protect every single job or save every single business is sadly true.

It won’t help those who have recently become self-employed. There is barely a week left of the 2019-20 tax year and I’ve already had a reminder letter from my accountant to get my paperwork in order (stuck at home, I could do this in record time). But data for the current tax year count for nothing — the scheme will only consider the 2018-19 tax year and the two before it.

The Treasury says it has to draw a line in the sand and is clearly mindful of fraudulent claims. But this is no comfort to young people starting out in the creative industries as sound engineers, TV production and other freelance roles who have been contacting me this week in disbelief that no help is available.

Then there is the hard cut-off at £50,000. If your average trading profit over three years is a penny higher than this, you won’t get any help. I spoke to a reader yesterday who averaged out at £55,000. She is a single parent with three children and has no idea how she will cope financially.

It does seem incongruous that no such income limit applies to the scheme to help furloughed PAYE workers. Both schemes have payments capped at £2,500 a month — so why should the self-employed be treated differently?

Some of the bleakest phone calls and messages I’ve received have been from small business owners who are directors of their own limited companies.

Phil runs a landscape gardening business. He’s built it from nothing, has paid himself very little via dividends as the business has grown, and employs a small team of PAYE staff. Now that work has come to a halt, he has applied to furlough his workers on 80 per cent pay.

Although he considers himself to be self-employed, the scheme is not designed to help owner-directors paid via dividends. Nor will it help self-employed people running their own limited companies, which includes personal service companies and contractors already reeling from IR35 changes.

Not all use a “limited” structure for tax reasons alone. Self-employed professionals and tradespeople need it to limit the scope of any future negligence claims.

Even if their dividends were less than £50,000, tax experts say there is no easy way of knowing from an individual’s tax return whether these were generated from a UK company that they own and run, or shares in BP. So it falls into the category of “too difficult”.

Owner-directors could seek a business interruption loan, but it emerged this week that some banks are asking for personal guarantees on top of the government’s guarantee — meaning they could risk losing their personal assets as well as their businesses.

Business rates concessions are of no use to Phil, as his landscaping business doesn’t have physical premises. The VAT and tax deferral will be of some help, but he is already under severe financial strain by opting to “stand by his staff”. Businesses have to fund 80 per cent of furloughed staff salaries themselves, and will not be able to reclaim the grant money from HM Revenue & Customs until May.

For this reason, many private companies are telling workers they won’t be applying for the PAYE help scheme on their behalf. This is a particular problem for agency workers and those paid via umbrella companies. Technically, their employers could apply for support, but if they don’t want to, the government can’t force them.

As for Phil, he’s applied for a job as a supermarket delivery driver to avoid going under while his staff sit at home doing nothing.

Owners of small businesses who receive all or part of their salary via PAYE (a less common arrangement) could technically furlough themselves for three months and receive 80 per cent pay support — even though they are working all hours battling to save their businesses.

Business lobby groups are seeking urgent clarification from the Treasury on this point. It seems especially sad that there is so little help for entrepreneurs who have taken risks, worked hard to build up businesses, created jobs and generated tax revenues. If a little more could be done to save them, the post-corona economy would benefit from their enterprise.

Everyone is mindful that the government has designed these schemes from scratch in a matter of days, so there are lots of outstanding issues to clear up — but people are also desperate for answers.

Plenty are angry about the chancellor’s remarks about how taxation of the self-employed needs to be “levelled up” at the next Budget as a quid pro quo for providing his support package.

These differences have bothered the Treasury for years, but the self-employed are quick to point out that they don’t get any of the perks PAYE workers receive, such as sick pay, holiday pay or a pension. Big companies have benefited from the flexible labour force, but very few self-employed people have been able to build up long-term savings they can fall back on.

The self-employed encompasses a vast group of workers, but the current crisis underlines that the one thing they have in common is a highly insecure income. Early June will prove too long a wait for many. 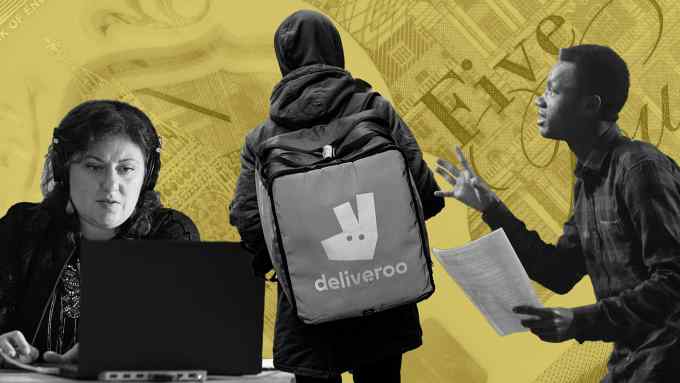