Digital health start-up Babylon has struck its second major deal to offer its artificial intelligence-powered doctors through smartphones after Samsung agreed to pre-install its technology on its new devices.

The deal will allow consumers to arrange video consultations or check medical symptoms through Samsung’s Health app, which will use the London-based company’s software to send back advice.

The technology will initially be standard for anyone who buys a Samsung smartphone in the UK but will be rolled out worldwide as part of an aggressive push by Babylon into international markets, according to people with knowledge of the plans.

Users will be able to check symptoms or arrange video consultations for a fee of £50 a year or £25 for a one-off appointment after the rollout. Samsung will pay a licence fee to use the technology and share revenues with Babylon as it attempts to improve its health products in the face of competition from Google Fit and Apple Health.

The companies did not disclose the financial details of their agreement.

But the deal will propel Babylon further into the market for private medical care after a lukewarm response from the UK’s National Health Service. Founded in 2014, the company has faced a backlash from doctors over its partnership with the state-run service, which allowed patients in some parts of London to use its GP at Hand app instead of registering with a specific surgery. 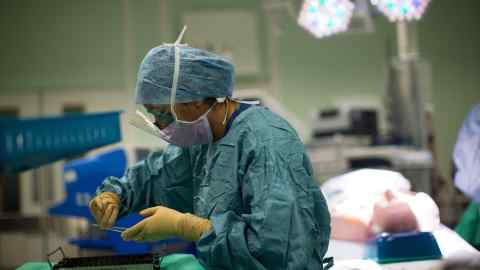 The government compensates Babylon for patients who agree to switch to the service. However, some doctors argue that the start-up “cherry-picks” patients who are easier to treat, depriving clinics of funds that they can use to handle more serious cases.

The Samsung announcement comes a month after Babylon signed a deal with Tencent, the Chinese internet group, to offer the service through its messaging platform WeChat, which has almost 1bn users. It also signed an agreement this year with Saudi Arabia’s ministry of health.

Babylon, which was valued at $280m in its last fundraising round 18 months ago, has more than 1.4m users, almost half of whom are based in the UK. The remainder are spread across Rwanda and Ireland, though this is expected to change after its agreement with Tencent enters a full scale rollout in the autumn.

Ali Parsa, Babylon’s chief executive, said patients own the clinical data collected through the app, and the company does not share it with partners such as Tencent or Samsung.

The former Goldman Sachs banker, who previously founded Circle, the UK’s first private operator of an NHS hospital, said the start-up scrubs the data for identifiable markers then uses it to train its algorithms.

“We put all our patients’ data on a graph database which will allow us then to compare it with others,” he said. As you use these things in different countries, your machine is becoming more and more knowledgeable.”