How I spend it… Louisa Young on dancing

I love a dance. Loud music, throw yourself around, change the mood. It’s that simple. Sleeping to waking; sulk to cheer; knackered to game. Dance for mental health! I have history lined up on my shelves in decades and formats: the vinyl, the cassettes (there’s a cassette player in my ancient car), the CDs, the old laptop containing 10,000 tracks I can no longer get at. And, oh my Lord, the internet.

When I was little, I used to thunder about the sitting room to whatever classical music my dad was playing. César Franck’s Symphony in D Minor was particularly good for being a bear in the woods; Schubert on the piano meant wild waltzing. I was forced into ballet, the only plump child in Miss Senhouse’s class, and my legs still turn out – more like a seadog’s than a danseuse’s – but I do have an excellent port de bras. They had to say something nice, and there was no compliment to be given to any other part of me, ballerina-wise. Later I learned to two-step in Texas. My cowboy dance partner said as I improved: “Y’all take a country ’n’ western pill when y’all went to the john?”

Brits tend to need to be a bit drunk to dance. I suppose, exercise-wise, my cider consumption and dancing probably balanced each other out in the end. But what do you do when you’re never ever going to a club again, you’re in bed by 11 most nights and even the few boys who would dance back then won’t dance any more? Joined-up dancing was always my favourite. I still twirl my daughter in a makeshift jive; she’s amenable, but let’s face it, she’s left home.

The novelist Nicholas Blincoe recently started putting pictures of his vinyl singles on Instagram. It’s an alluring collection, and one day I suggested this was all very well, but how about playing them rather than displaying them? And dancing to them? And filming himself? And posting it?

“I will if you will,” he said. So we did. So now I have to dance every day, or Nicholas will shame me.

Dancing has become self-expression more in the choice of tunes than the, erm, choreography

It’s a great pleasure, though I’m not sure what the lodger makes of it. It’s become self-expression more in the choice of tunes than in the, erm, choreography – I have four moves and do them in order, with four variations: extra arm action, falling over on the turn, cowboy-style (I can’t wear the boots because they clatter) and wriggling like Italian singer Adriano Celentano. There’s a lot of self-mockery involved. Jonathan Richman singing “They’re all in my trance when I dance, the way I move myself around” cannot be danced to straight. But despite that, I love it, and people say it cheers them up, so what the hell.

A London theme runs through it, because that’s where I am. My brother alerted me to a beautiful sentimental track from 1939 called Till the Lights of London Shine Again, by the Joe Loss Orchestra with Chick Henderson singing. For that I wore a kimono and swooned about like a sad lady whose soldier lover has left her behind in a dingy rooming house, as if I were in a Patrick Hamilton novel. During lockdown, I played Lily Allen’s LDN, a little joke: “Why oh why would I wanna be anywhere else?”. Leroy Carr’s Papa’s on the House Top was another family lockdown classic. Yesterday was Tilted by Christine and the Queens; my daughter had been singing it, and the catchy chorus going “I’m actually good!” is excellent for morale. I’d love to dance to my own songs with my tiny band Birds of Britain, but they’re all about death. The most cheerful is called Love Ain’t Listening – so not that cheerful. I did dance to that one.

Nicholas is better at actual moves. He’s got steps for Northern Soul and Plastic Bertrand and skanking. For The Beach Boys’ Good Vibrations, he stood on his midcentury coffee table with his arms out. But he will always win because he has Fredo, and Fredo is a dog. Also he danced in his pants, to The Stranglers.

I do have my first record, The Rolling Stones’ 1964 EP, though. I was five when I bought it with my pocket money from Woolworths in Queensway. I may dance to Poison Ivy tomorrow. Celentano-style.

You Left Early by Birds of Britain is available on CD, vinyl and download. A True Story of Love and Alcohol by Louisa Young is published by Borough Press. @louisalouisayoung

Get alerts on Dance when a new story is published 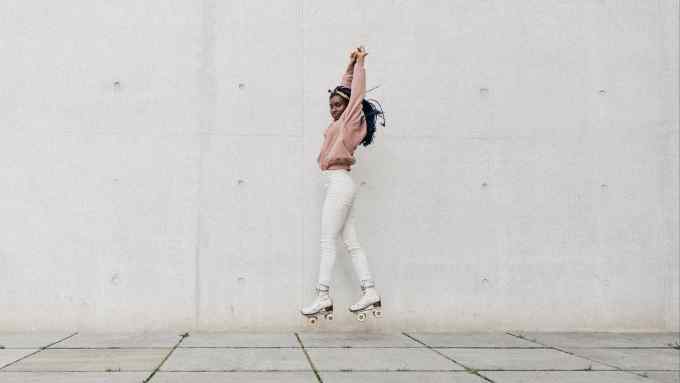