Portrait of a park: Yoyogi, Tokyo — a preening, pastoral playground

In the first in a new FT Globetrotter series on parks in our cities, our Asia business editor revels in the magic of the Japanese capital’s most eccentric and accepting green space

We’ll send you a myFT Daily Digest email rounding up the latest Things to do in Tokyo news every morning.

At the foot of a hillock in the south-western corner of Yoyogi Park — disguised at this time of year under a crinkly duvet of fallen ginkgo leaves — is a concrete-encased steel grate that reassures the passer-by that they are not, in fact, wandering in the countryside.

Every three minutes or so, a plume of leaves suddenly erupts, gusted skywards by a distinctive cocktail of axle lubricant, dust and other mystery ingredients of underground railway air.

About 30 seconds later, a Chiyoda-line train rumbles through the tunnel just a few metres below your feet, redoubling the reminder that, in a city of exquisite confections, Yoyogi Park is arguably Tokyo’s most brilliant.

It is a preening, pastoral playground right amid the world’s biggest city. Today, as it happens, the grate is occupied by a woman arranging two plush mascots (one a pork cutlet, the other a battered prawn) in front of the leaf-spume so that her boyfriend can take the mascots’ portrait on a $1,100 camera.

Various Hogwarts-style enchantments ensure Yoyogi’s strange sense of both insulation from the real world and mild disorientation once inside its (lockable but never-locked) gates. There are the old oak, pine and cherry trees on the perimeter that conceal almost all views of the Tokyo skyline. There are the sudden moments of gradient and change of footpath direction that create dozens of distinctive, discreet pockets and zones.

There is the juxtaposition of foliage and man-made features that create a patchwork of places to disappear into and places to meet up at. All this without being especially big. The runners endlessly circulating its various paths give Yoyogi a permanent bloodstream of Lycra and exertion, but its longest perimeter route is only 2.5km and the whole thing is just 134 acres.

Yoyogi, which sits adjacent to the great shrine to the Emperor Meiji, is a comparatively recent addition to Tokyo, and feels younger for that. The more austere Ueno Park, on the other side of the city, was established in 1873: Yoyogi opened to the public a century later once the 1964 Olympic Village, which once stood on it, was demolished. In You Only Live Twice (1967), when James Bond is driven past Kenzo Tange’s National Gymnasium by a Japanese secret agent, you catch a glimpse of Yoyogi in its infancy.

Above all, there is something in the spirit and history of the park that gives Yoyogi its otherly magic. Not far from the ginkgo-gusting grate is an eagle-shaped monument to Japan’s first powered flight in 1910; on the opposite, eastern edge is the sole remaining lodging from when the area was commandeered as the Olympic Village in 1964; between the two is an imposing statue of the feathered serpent god Quetzalcoatl, presented as a gift from the Mexican government to Japan. The pioneering, the embracing and the outré in one place.

Tokyo’s parks all have a different atmosphere, but few generate such a powerful appeal or accessible environment for eccentricity — whether practised alone or in groups. It is an atmosphere that gives equal welcome to the activities of the defiantly isolationist pogo-stick aficionado or opera diva using it for escape, and the synchronised-skipping group, board-game society or “Songs of Abba” glee club using it to assemble. There are acrobatic performers who long to be seen, and those who come for privacy unavailable at home or work. For one particular group I chatted with on a recent Sunday — men and women devoted to the designer Kaneko Isao, who combines Alice in Wonderland and Dickensian clothing styles — Yoyogi is really the only valid spot in Tokyo for a fin-de-siècle-themed tea party.

A few of the activities are formalised. It is a park that has long tolerated a small colony of homeless people in one out-of-the-way corner — an unusual sight for this part of town. In another corner, under large cedar trees, is a municipal bicycle rental office that has provided the bikes on which thousands of children, steadied by the hand of a jogging, sweating parent, have learned to ride. Not far away are the various dog runs, organised by size of hound and, it sometimes seems, the ebullience of their owners. Dogs are everywhere in Yoyogi, participating unwittingly in a fashion parade and photo-shoot where a pair of Italian greyhounds in matching tracksuits can, a few paces later, be comprehensively outdone by a pair of Italian greyhounds in matching designer dungarees.

Some animals — piglets and otters, tortoises and iguanas — are taken for walks by proud owners. Others — snakes (harmless, infrequent and usually in the forested part that abuts Meiji Shrine), raccoons (at night and generally when there are picnic scraps) and the ubiquitous black crows (mesmerisingly evil-looking) — roam free as the park’s true owners.

But beyond all the spice, Yoyogi supplies the usual sustenance of urban parks anywhere in the world: a green space for office workers, families, teenagers and those simply in search of somewhere to stretch the legs or lie on the grass and read a book. It is a park whose green bronchioles fill and empty with the rhythm of the day or the season: the speed walkers and dog walkers in the early mornings, the leisured al fresco yoga classes shortly after, the sandwich lunches of fledgling office romances and the young mothers a few hours later with children out of school.

At weekends — most gorgeously in cherry blossom season — the grass is covered in picnic mats and blue tarpaulins, creating small encampments for each grouping. Shoes, as with any Japanese dwelling, are removed before stepping onto the mat. Booze, in its many glorious guises, receives a warm, year-round Yoyogi welcome — even more so since the pandemic raised the premium on outdoor gathering spots.

All of this, by necessity, takes place at relatively close quarters. Capoeiristas, athletes, canoodlers and aesthetes must jostle for space and etiquette is to ignore them completely unless they clearly crave attention. The park has its stated rules, but it often feels the only real crime is infringement of someone else’s right to disappear into their own world.

Yoyogi’s most consistent spectacle is to be found at the main south-eastern gate, just near the exit of Harajuku station, the mouth of the Omotesando shopping street and the delta of boutiques that exist as guardians of Japan’s claim to cool. Here, in a concrete clearing, dance the rival squads (The Fairladies, The Strangers, etc) of rockabillies: their clothes a just-so assemblage of denim, leather and chains, their hair a pommade-slathered homage to 1950s America, their boots encased in a protective wrapping of gaffer tape. The hits blare from battered stereos. Weather permitting, they are there every Sunday, always with a rigid disdain for other gangs doing exactly the same thing just a metre away.

These ageing hip-wagglers are, in their eyes-screwed-shut concentration on their passion, a kind of overture for a park that feels defined by different theme tunes as you stroll through. Many people come here for solo practice of musical instruments (piccolo to bassoon, ukulele to double bass) that would be too noisy for their apartments. Others — bongo-drummers, a group koto class, an occasional Jew’s-harp ensemble — meet by arrangement or, as one tenor saxophonist tells me, “because you just come to Yoyogi and you might find someone who has the same hobby”.

But there is also a musicality to the other groups that the park nurtures: duets of blind runners and their guides, trios of flamenco dancers, quartets of duck photographers, a quintet of women who enjoy doing handstands on the shoulders of a giant dressed as Spiderman, and a gently panting wind section of elderly joggers.

The strictures of Japan still hold a powerful sway, of course. Politeness, tidiness and consideration for others reign. But Yoyogi feels like a place where at least some of society’s more burdensome hang-ups may be suspended for those seeking temporary asylum in its borders.

Do you have any more tales from Yoyogi? And which park in one of our FT Globetrotter cities would you like us to paint a portrait of next? Tell us in the comments below. 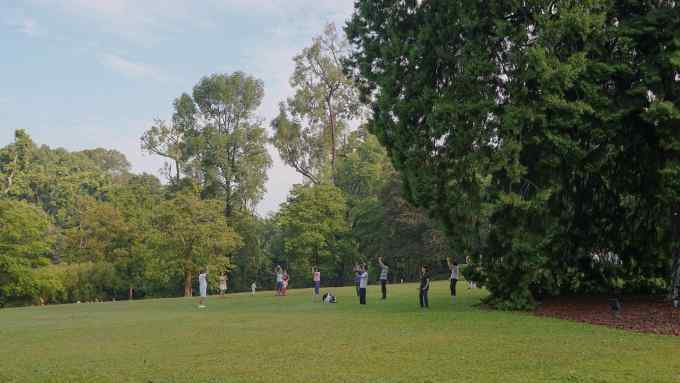