Gabriel Wildau in Shanghai and Tom Mitchell in Beijing

Chinese steel production and power generation contracted last year for the first time in at least a quarter of a century, according to official statistics released on Tuesday, as the economy grew at its slowest pace since 1990.

The data come as fears about China’s economy shake global markets and capital leaves the country at an unprecedented pace. Investors are eager for clues about whether slides in China’s equity market and currency depreciation at the start of this year were a sign of acute distress in the real economy, or whether policymakers can engineer a gradual slowdown that avoids financial crisis and social instability.

Fourth-quarter gross domestic product growth came in at an inflation-adjusted 6.8 per cent, according to the National Bureau of Statistics, placing the full-year figure at 6.9 per cent — in line with Beijing’s target of “around 7 per cent” for the year and with economists’ expectations. The 2016 growth target is 6.5 per cent.

“[Steel] demand is down even more,” said Sebastian Lewis at Platts Metals in Shanghai. “With prices where they are now, some mills have exited the market or pulled back production.” In a report posted on its website this week, the China Iron & Steel Association predicted domestic steel consumption would fall as much as 5 per cent in 2016 after declining 4.6 per cent to 705m tonnes last year.

According to CISA, falling demand for steel is now the norm in sectors as diverse as machinery, real estate and shipbuilding, with a few exceptions such as China’s resilient car industry.

“Last year was the turning point for these industries,” said Thomas Gatley at Gavekal Dragonomics, who predicts a further 5 per cent fall in Chinese steel output this year. “Things are not getting better for these sectors . . . Net profit margins are negative. They are basically wearing down what equity they have.”

How fast is China really growing?

George Magnus, senior economic adviser to UBS, discusses how reliable China’s data are and what country’s leaders need to do to reassure investors

Resilient growth in the emerging services sector helped cushion the slowdown in manufacturing and construction. The services sector grew 8.2 per cent in real terms in the fourth quarter versus 6.1 per cent for the industrial sector.

Despite the respectable headline growth figure, pain is deepening in the sectors that have traditionally driven Chinese growth and global commodity demand. Without adjusting for inflation, growth in industry and construction was a paltry 0.9 per cent for the full year, a sign that nearly four years of producer-price deflation has ravaged cash flow in the factory sector.

Overall, nominal GDP grew just 5.8 per cent in the fourth quarter and 6.4 per cent for the full year, implying that the overall economy is in deflation.

World
China is still adding a G20-sized economy every year 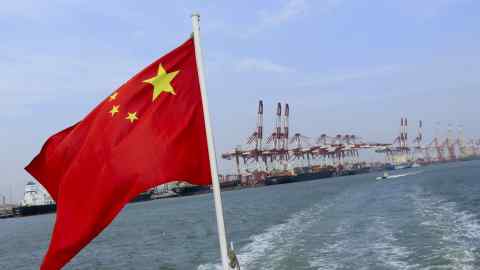 Fixed-asset investment — which covers infrastructure and factory construction — grew 10 per cent in 2015, the weakest full-year growth since 2000 and down from 10.2 per cent in the first 11 months of the year. Infrastructure was the biggest drag, as growth fell back in December after fiscal stimulus had sparked a brief rally in previous months.

“It raises questions about how effective fiscal policy has been. A big concern is whether the manufacturing slowdown will cause big unemployment. But if the service sector is resilient, that will create new jobs. The divergence in the economy will continue,” he added.

Factory output rose 5.9 per cent in December, down from 6.2 per cent in November and within range of October's seven-year low.

While the rebalancing of the economy away from manufacturing and construction continued, services growth slowed from 8.6 per cent in the third quarter as the contribution from financial services weakened.

“Based on this data, policymakers definitely need to do more,” said Xu Gao, chief economist at Everbright Securities in Beijing.

“The slide in services growth was expected, given the stock market. That’s going to continue in 2016, so if there’s not a clear recovery in the industrial sector and infrastructure investment, it will be very tough to meet next year's 6.5 per cent target.”

Economists widely agree that China’s potential growth is slowing as an ageing population shrinks the labour force and catch-up growth achieved by shifting labour from agriculture to the modern, urban economy is exhausted.

The country’s leadership has promised structural reforms to boost long-term growth. President Xi Jinping has said that policy in 2016 will focus on “supply-side reforms”, including shuttering zombie businesses in industries such as steel and shipbuilding that are rife with excess capacity. Authorities have also pledged to streamline the bloated state-owned enterprise sector, whose return on assets lags behind the private economy.

But policymakers are also relying on demand-side stimulus to cushion the slowdown. China’s central bank cut interest rates five times in 2015 and pumped Rmb2.5tn ($380bn) into the banking system through reserve-ratio cuts in an effort to lower financing costs for corporate investment and home loans, and keep credit flowing.