Galway, on the west coast of Ireland, might be the most attractive city in the world in which to be either a restaurant customer or a restaurateur.

From St Patrick’s Day, which falls conveniently in March after the quiet months of January and February, when, as our bus driver said, “everyone is spent up after Christmas”, the city is a magnet for tourists and others from overseas.

A succession of arts and literary festivals fill the summer months. The autumn is replete with graduation dinners connected to the university and the two IT colleges, before the run-up to Christmas and the new year.

The students — more than 20,000 of them — provide not just custom but also part-time staff.

At the Brasserie on the Corner, the ambience could scarcely have been more American. With its dark interior and wooden booths, this restaurant could have been in New York, Chicago or Boston. There seemed to be Americans at every table too, and everybody looked to be having a good time.

The menu is comprehensive and, fashionably, it gives credit where credit is due: to suppliers. The two central pages list all the names of those who have reared or caught ingredients that feature in the dishes.

This approach almost works. There was a definite edge to our two starters, as though there is someone in the kitchen who has talent but possibly lacks the courage of their convictions.

A crab salad with lemon and a crispy wonton was fresh and lively but spoilt by too many ingredients. The lobster in my ravioli was excellent but the dish was let down by an over-heavy shellfish sauce.

As for our main courses, the scallops with chorizo was well sauced but the scallops seemed less than fresh. An enormous serving of lamb rack was slow cooked and oozed generosity — but lacked finesse. Our dessert, a lemon tart, was also problematic: an excellent filling inside an insipid pastry case. With a bottle of Soalheiro Alvarinho 2016, our bill came to €143.

A trip to nearby Kai, run by David and Jessica Murphy, might inspire the Brasserie on the Corner’s staff. We only had time for a quick lunch, when Kai operates as a café with a blackboard menu (dinner, which is served seven nights a week during the summer, is more formal, with a printed menu). The walls are lined with packing cases and a large skylight lets in abundant sunshine.

We ate very well here. A bowl of harissa chicken salad with sweet potatoes, nectarines and chickpeas, and another of crab and miso broccoli, were washed down with a glass of Waipara Pinot Gris and a superior Puglian red. As I paid the cashier the bill of €40, I came face to face with a plethora of home-made desserts as well as Kai’s own bread, a loaf of which fortunately fitted into our suitcase.

The culinary highlights of our brief Irish trip were, however, two meals cooked by Ruairi de Blacam at his restaurant on the island of Inis Meáin in the Aran Islands, a short hop on the plane from Connemara airport. The restaurant, which is named after the island, was built with his wife, Marie-Thérèse, 11 years ago.

In the seven years since I first ate here, a great deal has changed. The owners have grown in confidence. Their profits have been ploughed back into working with their neighbours to grow more fruit, vegetables and salad for the kitchen, and their wine list has been strengthened enormously.

Instead of an à la carte menu, the kitchen now offers only a four-course dinner menu that focuses exclusively on fish and vegetables. As De Blacam claimed: “Our guests immediately welcomed the lack of choice, overriding our innate nervousness.”

The two dinner menus we enjoyed were most impressive: a crab salad with finely diced apple; a thick chunk of lobster laid upon the flattened leaf of what must have been an enormous cabbage; turbot with a perfect sauce Grenobloise (ie plenty of capers); and an apricot tart with lemon verbena ice cream.

The views from the dining room are stunning. This was unquestionably one of my best meals of 2018 so far — and I hope it will be one of yours at some point in the future.

If you are a subscriber and would like to receive alerts when Nicholas’s articles are published, just click the button “add to myFT”, which appears at the top of this page beside the author’s name 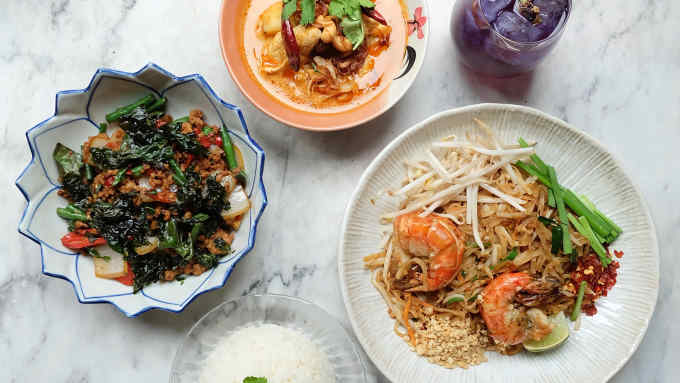