Contemporary African art has never yet found a place at Tefaf Maastricht, but Tafeta is changing all that

For the first time in its 32-year history, Tefaf Maastricht has a booth dedicated to contemporary art from the African continent. The London-based exhibitor, Tafeta, is among the five selected for this year’s Showcase section, which enables younger galleries across all disciplines to show in the venerable fair.

Ayo Adeyinka, Tafeta’s founder who transformed the former art consultancy into a gallery in 2013, has chosen to bring two Nigeria-born artists, the hyper-real draughtsman and painter Babajide Olatunji (born in 1989) and the sculptor Niyi Olagunju (b. 1981). Both make works reflecting the cultural history of their continent.

Olatunji’s ongoing project Tribal Marks Series, which began in 2014, offers the most arresting images. Tafeta is bringing six recent additions to the series, priced at £4,000 and £12,500 (for two larger pieces). These full-on faces are less portraits of the sitters, who are in fact painted from memory, and “more like avatars”, Adeyinka says. They are Olatunji’s way of documenting the controversial tradition of facial marking — incisions that create scars — among Nigeria’s 300-plus tribes. From afar, these hyper-realistic works seem like photographs, but are in fact carefully executed in charcoal and pastels.

Olatunji, a self-taught artist based in Lagos, originally trained as a botanist, Adeyinka explains. More subtle, but equally meticulous, are four works on paper from his recent Aroko series (£6,000 each). These depict a cryptic messaging system based on physical objects and still used by the Yoruba people. “Sometimes the only people who understand these messages are the sender and receiver,” Adeyinka says.

He is beginning to crack the codes, and each work carries an explanation of its meaning. One of the pieces coming to Maastricht shows a piece of soap, a sponge and a small heap of red camwood powder — symbols that “are sent to a son in a far place to say, ‘We are bringing you a wife, and we implore you not to reject her’,” according to the gallery. Adeyinka has already had great success with this series: he sold out at London’s 1-54 art fair in October — and has sometimes been pleasantly surprised by buyers’ enthusiasm. “One of the works had a broken comb in it, which we explained meant, ‘I want a divorce’,” he says. “I thought we’d never sell it. But we did!”

Adeyinka wasn’t aware of Olatunji until the artist reached out to the gallerist over Facebook. But he’d known Niyi Olagunju for longer: “I met him through friends when I was a collector, and he was on active service [he served in the British army between 2002 and 2006]. Then he won a scholarship to study art at St Anne’s College, Oxford, so we kept in touch,” Adeyinka says.

Two of Olagunju’s “Baga Nimba” sculptures are coming to Tefaf, reflecting the artist’s preoccupation with the trade of African art and objects — especially its dysfunction. “Olagunju looked through an auction catalogue and noticed that a Shona mask that had belonged to Picasso and then went to a New York collection was a much easier sell than anything that had actually belonged to anyone on the continent. None of the owners, specialists or even shippers of African art on the market seemed to come from Africa.”

The disconnect seems most apparent in Olagunju’s larger work for the fair, “Baga Nimba (Wood-Chrome)” (2019, £30,000), which splits a sculpture in two, to present an African and a western aesthetic. To make these, the artist buys a baga wood sculpture in Ghana — an image of a woman that symbolises the elevated status of motherhood and nurture — and has it cut in two by a specialist fabricator in Beirut.

Adeyinka reassures me that these base sculptures are not historic pieces (prized examples can sell for five figures or more), but rather “well-crafted but workshop, tourist versions . . . which have been made to look older than they are”. Olagunju then adds metal to one half of the work — such as the chrome plating on the piece in Maastricht — to create a visual contrast.

Adeyinka has wanted to show contemporary African art at Tefaf in Maastricht for a while — “this is the third time I’ve applied to Showcase,” he says — but is not sure what to expect. “Most of my clients are in Africa, then the US and UK, so it would be good to make contacts with Tefaf’s European visitors.”

Although this is the first time that contemporary African art will be showcased at the fair, it’s easy to see connections with much older objects from the continent on view. Adeyinka is keen to build on the crossover potential.

“Collectors of tribal pieces have yet to embrace contemporary art fully,” he says. “Maastricht would be the perfect place to find out if they finally will.”

Explore the series
READ MORE
Design round-up: bespoke and limited edition pieces are all the rage 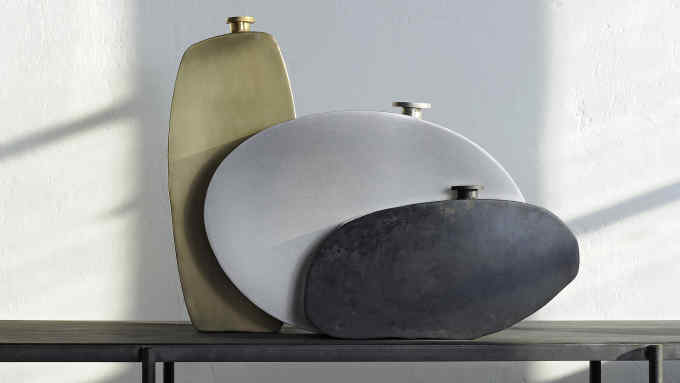