The artist’s work spans painting, prints, jewellery and, now, one of London’s most prestigious Christmas trees

In the shadow of west London’s Stamford Bridge stadium is a somewhat secret, garden-surrounded development once known as the Italian Village. Built in the 1920s as artist studios by sculptor and architect Mario Manenti in the style of his Florentine estate, for the past 15 years it has been the creative hub of painter and printmaker Suzy Murphy. On a sunshine-and-showers autumn day, her whitewashed attic space is bright and welcoming. The fire is lit. She makes tea in the well-appointed kitchen nook. And although we’re just moments from the bustle of Fulham Road, it feels like a world away.

“Cutting out the outside world is really important for me,” says Murphy, her hair piled on top of her head, her white paint-splattered overalls echoing her surroundings. It’s easy to see why her late friend, the writer AA Gill, favoured Murphy’s studio as a workspace. “He just moved his stuff in! Once a month he would have a life-drawing session here, then we would go to lunch,” she recalls. “It was a lovely routine for a few years.” But for the most part, the space is a personal sanctuary. “Your studio is an extension of you; it’s like your brain. When I’m working on the big canvases, I sleep here,” she adds, signalling to a cosy bed space on a mezzanine level above. “You can produce a lot in four days if you’re not dealing with domestic life.”

The past few months have been particularly productive for Murphy: work for her current solo show at Lyndsey Ingram gallery is stacked all around. Among the nearly 2m-tall paintings are huge, atmospheric starry and snowy skyscapes, each anchored by a lone, miniaturised house. “I always think that’s me, really,” she muses of the symbol that reoccurs – alongside vast, open landscapes and trees and foliage, across smaller paintings and prints. She pulls out a new set of monoprints that have been painted into – among the dark and dramatic series is a house set on fire.

“Domesticity really is the burden for all women; hence I’m always doing burning houses,” says Murphy, now in her mid-50s and a mother of three sons all in their 20s. “I think you have symbols that are within you, and they move around my paintings. The burning house has become one. Another is the black dog, which was the dog my mum gave me when I was a child. She didn’t tell me it was a girl, and I called it Toby. She was a particularly mad dog, and she sort of travels with me.”

Each piece of jewellery is a small sculpture – precious, totemic

Much of Murphy’s work is connected to childhood memories. She spent her early years living in Whitechapel, east London, in a big Irish family; her mother was one of eight siblings. “There were 11 of us living in a flat. I was born out of wedlock,” she whispers. When her mum got married when she was five, they moved to Alberta, Canada, where she fell in love with the landscape. “When I had my own children, I started taking them to America, doing a lot of road trips, and it brought back all those memories. I thought, ‘I really need to explore this.’”

For collector Katrin Bellinger – a former dealer in Old Master drawings and the founder of the non-profit Tavolozza Foundation – it’s Murphy’s wide vistas that are the most evocative. “Suzy always creates this wonderful atmosphere, a sense of a longing.”

In recent years, Murphy’s recurring symbols have increasingly been rethought in new materials. “I had this urge to make the paintings three-dimensional,” she says of table-top-sized bronze and ceramic sculptures that grew out of her tree imagery. The 3D forms were later made in miniature and turned into gold-plated brass jewellery: first as a personal project for a friend’s daughter’s 21st birthday, then as a limited-edition collection, shown last year at Connolly’s Mayfair boutique. “I find her work is poetic and profoundly affecting,” says Connolly owner Isabel Ettedgui. “Each piece of jewellery is a small sculpture – a tree, a running dog, a foot; they’re precious, totemic, made by hand to be worn or held.”

For the Lyndsey Ingram show, the forms have morphed again – this time into branch-like mobiles initially made from plaster, fabric and wire (“it literally looked like a Blue Peter special,” she laughs), and then cast at a foundry in Scotland. “It’s all about playing, stretching your language,” says Murphy, who has also begun combining her paintings with making ceramics. “This actually started when I needed a break from the paintings, and I would go to the pottery café,” she says, pointing out that my pink tea mug, rimmed with a purple, scalloped pattern, is her own handiwork. “I painted all my own stuff for my entire house!” Encouraged by Ingram to bring this pastime into her studio practice, this summer she learned to mould plates. “And I went crazy. I did like 70 plates. I become quite obsessive. Once I get into something… I repeat.” (Still in the “playing” stage, the plates will be shown sometime next year.)

This month, Murphy is showcasing yet another creative outlet. Following in the footsteps of Damien Hirst, Tracey Emin and Antony Gormley, she has designed the Connaught Christmas tree, just unveiled on 17 November on Mayfair’s Mount Street. “I would always go past the Connaught Christmas tree and think, ‘How would I do it?’” says Murphy. “It’s such an honour.” The hotel’s general manager, Sandeep Bhalla, explains that “this year’s creative vision by Suzy will reflect our legendary hound, the emblem of the hotel. It’s also inspired by her past artwork Toby Was a Girl, featuring her childhood dog.” A neon dog runs round and around the 30ft fir tree and stands atop too. “If she symbolises anything in this festive moment, on this tree, it is the timeless message of Christmas,” says Murphy. “One of hope and peace, and light over dark.” 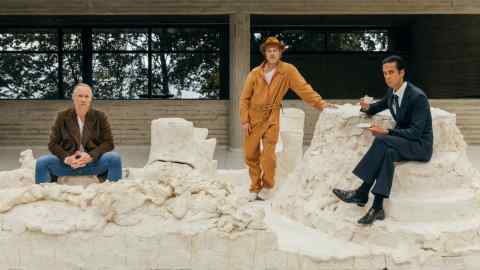 At the base of the tree are a series of words that are touchstones in Murphy’s practice: truth, passion, peace and solitude. That solitary process is one Murphy has fostered since her teenage years, when, after a year at Central Saint Martins, she took herself off to a remote village in the Italian mountains to work on her own. “I remember the isolation and thinking that the painting was taking over my brain,” she recalls. “But now I’m used to that feeling.” When she feels like her work is going badly, she takes a walking tour of nearby Brompton cemetery. And the painting “always gets to a resolution”, she concludes.

Suzy Murphy: Of Dark and Light is at Lyndsey Ingram, 20 Bourdon Street, London W1, until 23 December